To look at The Wonder Stuff on stage you would think you couldnt get a more random set of people. Theres the cheeky Miles Hunt, the rocker Malcolm Treece, quiet bassist Mark McCarthy, and drummer Andres Karu hidden behind excellent fiddle player Erica Nockalls, who has good posture and is probably classically trained. As a friend notes, they look like five people who would be standing at a bus stop or in a supermarket queue, not a group of musicians. The addition of the fiddle is great for the new songs like Angelica Maybe, but on some of the old songs it feels that it is not needed; the sound is full enough with the basic set up.

New tracks do not bode that well with the crowd; the unoriginal and slow pace of Escape From Rubbish Islands The Sun Goes Down On Manor Road stops the set dead in its tracks, but Blah Blah, Lah Di Dah from new album Suspended By Stars is quite a nonsense and catchy tune, with Miles pulling faces during vocal duties. Theres a moment where all the band members stand still like musical statues, and for all the heckling from the crowd just one statement of Come on you f*ckwits! prompts a laugh and stops the silly games. 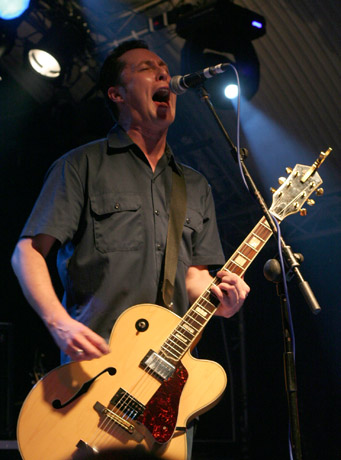 Its when the hits start rolling that the middle-aged crowd really go for it, even a mosh pit appears, though not a very violent one; quite slow infact. This is for you children, and your children, comes an overally flattering line from Miles. Circlesquare does deserve the fiddle parts, played by a not too impressed-looking Erica (could it be an act?). The West Midland lads have been playing a few festivals this year, and it has taken them a while, but they now seem to realise that the old hits are what makes the crowds move, in mud or on a sticky club floor. This prompts a classic I have not seen them play live before (last time they said We are not playing that shite), and out pops Size Of A Cow. The crowd are spared from Dizzy as we dont look like we want it (- quite right). Dont Let Me Down.Gently is a corker, along with Caught In My Shadow, Give Give Give Me More More More and Its Yer Money Im After Baby. Though the Cockpit is not as crowded as it usually is, the show is a good one and its nice to be able to dance about without knocking drinks over.
article by: Danielle Millea
photos by: Danielle Millea
published: 07/12/2006 00:17