With a definite sound of the Levellers to them, Cornwalls 3 Daft Monkeys are not daft or monkeys at all. There are however 3 of them, using a fiddle, foot drum, bass and 12 string guitar to produce dancing folk jigs with bits of dance, dub, punk and reggae mixed in. One Fine Day is a lengthy tune and the punky Social Vertigo are good songs for the festival circuit, where the monkeys are best known.

The Levellers can always pull a crowd. It is heaving in the largest of the three academys and once everyone starts dancing (which doesnt take long after the warm up from the 3 Daft Monkeys and The Levellers impressive back catalogue) it gets a wee bit warm, but with a fantastic atmosphere. One Way and Beautiful Day are thrown at the crowd early, and the digeridoo part at the end of Boatman is great with Stephen Boakes dressed in UV face paint, a feather bower and a kilt waggling his bottom (the poor soul is missing some teeth, according to Mark). 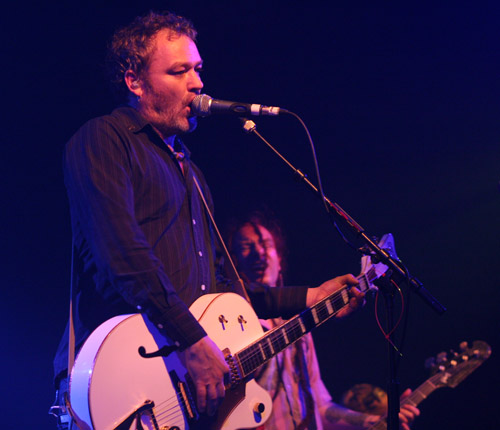 The set is just hit after hit, with Hope Street, Liberty, Battle Of the Beanfield and other Levellers lovelies. Even though there is little banter, the set seems to last 20 minutes, when in fact 2 hours have passed. Riverflow raises theroof, with people in varying stages of drunkenness trying to keep up with the faster then recorded pace of the track. The lads look to be having a great time as always, and the free CD to coincide with the Chaos Theory DVD is the icing on the cake.
article by: Danielle Millea
photos by: Danielle Millea
published: 05/12/2006 10:57