30 years on and The Buzzcocks are still playing like its 1976. Though with a different drummer and bassist (Tony Barber and Danny Farrant) Pete Shelly and Steve Diggle are the same as ever. While Diggle is the constant showman, lifting his guitar in the air and jumping around, Shelley seems to unite with the other band members (especially the reserved bassist) in looking at Diggle and thinking what is he doing? When Shelly takes the mic he helps to emphasise his vocals with expressions for every word and by tilting his head from side to side.

Either side of the stage are screens showing pictures of old album covers, publicity shots over the years and naked women with irons instead of heads. There is little banter between songs, even though this is a landmark show in their hometown. They appear to be enjoying the crowd down front though, pulling faces at them and mouthing quips back and forth. 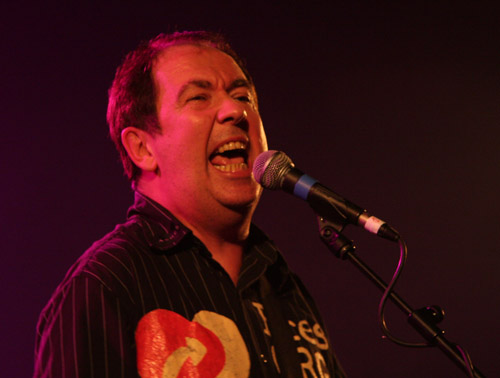 A few songs from the new album Love Bites appear but most notable are Whatever Happened To, Soul Survivor and Going Blind. It is a 2 hour set, including a 15 minute interval (well, they are a bit older now) for a costume change. The white shirt was a bad choice for Diggle, as his guitar strap left sweaty black stains on his back. Pete Shelley, for the fashion conscious folk, is wearing an Orgasm Addict shirt which changed to a Whatever Happened To shirt.