With the odd cowboy hat wandering in and out of the Met, you know theres going to be some sort of hoe-down tonight. However the first act would suggest otherwise. The idea to put a rock/electro band on before some hillbilly rockers may not have been the best idea, but who else do you get to support a band that wear dungarees, tie-dyed tops and cover AC/DC with banjos and the like?

Scotlands Dark Water have great stage presence, though it is samey and unoriginal. The female vocals are on the whole ok apart from the odd bum note, and the guitarist seems to focus more on pulling faces and attracting the females attention then actually playing. The sound was good, but the guitar noise that makes you take notice is an effect on the keyboard tucked away at the back. The cover of Billy Idols Rebel Yell passed crowd approval though... 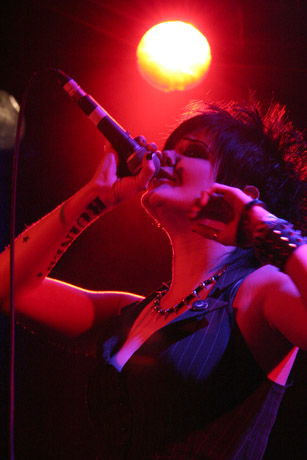 The stage looks bare after Dark Waters set. Only four microphones are standing until the men from Appalachia appear with their trusty instruments; banjo, fiddle, mandolin and bass guitar. Hayseed Dixie do not need a lot of stuff; they are masters on these instruments and can play at tremendous speeds. This, their last show this year, starts off slightly slower than normal, with the guys appearing to have to warm up (or drink more booze/moonshine/petrol). Soon Barley Scotch is shouting Halleliuh! and Brothers and sisters! in that unmistakable US mountain drawl, and talking about Dale Renos love of oversized women. There is also mention of mountain love and the four things that come with it; drinking, cheating, killing and going to hell. 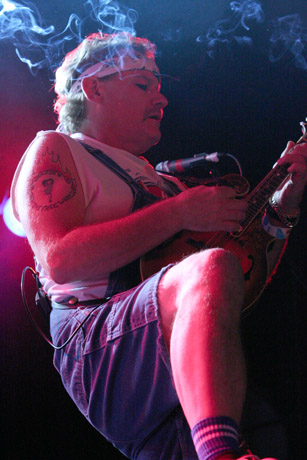 For those who do not know this insanity you can guess the sense of humour from the band name, which leans slightly towards AC/DC, hence the many covers that surround the odd original songs by the band (like the excellent Poop In A Jar). Rosie, Highway To Hell, Centrefold and Black Sabbath and Green Day covers fill the setlist, all played at top speed and with great skill, despite the drink that flows onstage. Apparently they are fresh out of ideas for the title (and content) of their next album, and invite ideas to be sent to them via a postcard, with the running theme being grass (past offerings  Kick My Grass, A Hot Piece Of Grass, you get the idea). All in all a fine night of foot-stomping rockgrass; now Im off to work on the new title!
article by: Danielle Millea
photos by: Danielle Millea
published: 23/11/2006 17:33