Youd be hard pressed to find a band as hard working as Wolfmother - the trio having undertaken a non-stop touring schedule through the USA, Australia, Asia & Europe that has lasted for around two years.

Since their UK tour in March 2006, where they played to approximately 50 people in Manchesters intimate Roadhouse venue, their status has definitely risen. On Thursday night, Wolfmother were the headliners for MTV2s first ever Brand Spanking New Music Tour, supported by three other bands, iForward Russia!, Fields & The Maccabees.

It certainly seemed like a loved up show, with several of the bands literally singing the praises of the other acts on the tour. First on stage were The Maccabees, a five piece Indie punk band from Brighton. The guys received a well deserved warm response from the already packed venue, despite their early performance time of 7.30pm. Electronica band Fields played next, followed by the always mesmerising iForward Russia!  a group with arguably the best band logo ever. Lead singer Tom is so hypnotic to watch perform that they would possibly gain just as much attention in the music press even if they didnt have the talent to back it up. 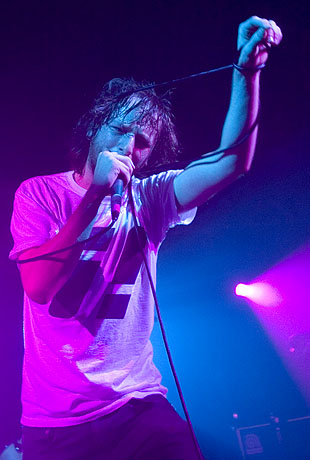 Unusually, it has taken Wolfmother longer to break into the UK music market than into the US (having already attained Rock God status in their native Australia several years ago). On the strength of their debut EP, the group had already gained a mass following due to their reputation as a great live band and since the worldwide release of their self titled Album, have been gaining a lot of attention for their retro sounding psychedelic style rock - influenced by bands such as Led Zeppelin, Deep Purple and Black Sabbath.

Having seen the band play three times over the last few years, it was a relief to see that playing to audiences at such a prolific rate has not dampened Wolfmothers enthusiasm. Lead singer and guitarist Andrew Stockdale & Chris Ross on Bass & Keyboards still put on a great show, constantly coming to the front of the stage to acknowledge the crowd, strike rock poses & continuously leap around. Chris, while playing his battered looking keys, manages to throw the instrument around, tipping it forwards & back while somehow managing to stay note perfect. Most impressively to me though, is the fact that while playing he seems to break into a spontaneous grin every few minutes that shows how much he loves what hes doing. 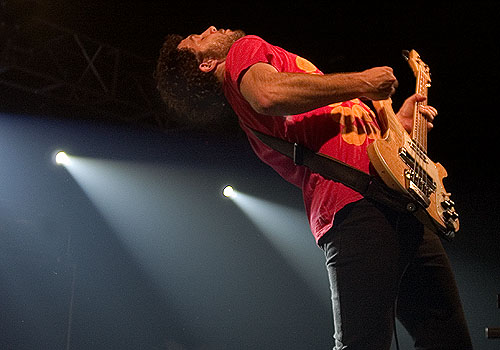 When you see Wolfmother play live, they sound EXACTLY the same as they do on record  something that in this case I saw as a bit of a negative. When the opening bars to Pyramid began, I knew exactly what I was going to get. Perhaps because it wasnt my first time at a Wolfmother show, I would have liked to have seen that the band had perhaps let some of their songs evolve over their performances. At least it shows that the three musicians that make up the band havent been tweaked in the studio to disguise a lack of talent.
article by: Kirsty Umback
published: 11/11/2006 21:43