Peaches. A gloriously crude woman with a face full of glitter and an army of foul named songs. Manchester Academy excitedly awaits her return to the UK with her brand new album Impeach my bush. The crowd are sexed up and ready to go, dancing shoes on and the enthusiasm that any loyal fan requires.

The lady herself enters the stage like a bull in a china shop, instantly making her presence known on stage. As expected, she is wearing very little. A figure hugging gold cat suit (minus the legs) with brilliantly camp gold thigh high boots and wild, black curly hair. Her shockingly pink eye make up travels down to her cheeks as she takes the microphone with both hands. The inevitable question is posed. How we doing Manchester? the thunderous reply could probably be heard from outside the venue. Peaches is about noise and expression. This is not as loud as it gets. 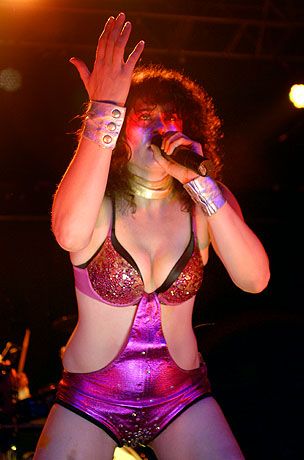 Disco meets rock meets beats. Peaches is a hard woman to try and categorise. Whilst her first two albums are significantly more electro, the new sound is a lot more harsh. More rock n roll. Whilst this progression was a brave one to make, it is suddenly pulled off. The crowd loved such tracks as Downtown, Slippery Dick and Boys Wanna Be Her. For a third album, the material is hot and it hits the right spot. In no time at all the crowd are pushing forward to get closer to the lady herself, gyrating at the front of the stage as she strips into a sparkly pink bra and hotpants. Screams entail. The atmosphere is getting warmer.

Nobody can escape. Old hits I U She and I dont give a enrage a violent reaction from the old fans. Suddenly all arms are in the air, bodies are clashing and lights are flashing. The stage is a haze of purple and pinks as Peaches bounds and leaps from the drum set. Its an out there experience, and solely not a gig for just standing and nodding.

Peaches is delectable to watch. Her presence on stage is over powering. As the songs get more filthy, so does she. Stripping once again into a black ensemble that leaves little to the imagination and giving it to the crowd. Teaches of Peaches ends the preliminary set, a wild outburst is revived and the band are greeted with medals and waistcoats from Peaches as a gratifying thank you, before she launches herself into an energetic 5 song encore. 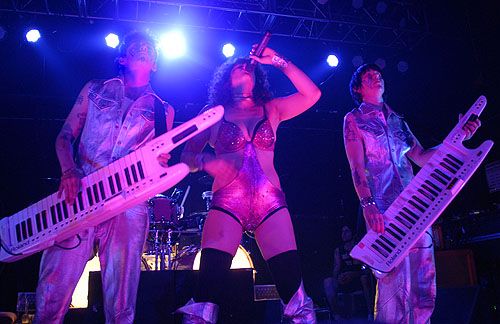 Whilst she may not be a fantastic singer as such, above everything Peaches is an outstanding performer with the ability to work the crowd up into a riot. She does exactly what she wants, whether that be carried off stage in a stretcher or congratulating herself with bottles of Becks. This was just not a gig, but a spectacle of a show. One with glamour and guts and a whole bucket full of charisma.

And amongst the mundane indie tones and blasé acoustic drones of the industry today, it was a show greeted with welcome and great praise.
article by: Kate Robinson
published: 13/10/2006 06:58