A few weeks ago, The Guardian Weekend Magazine claimed that Devendra Banhart was a major influence on current male fashion. This sounds hard to believe since hes hardly a mainstream performer, but scanning the audience at the Manchester Academy on Friday night seemed to confirm this statement. This American Pop/Folk singer with his trademark bushy beard & hippy attire had attracted a crowd of look-alikes, many of which were sporting facial hair, vintage waist coats & paisley shirts.

The last time Banhart played Manchester (around this time last year), he performed in the unlikely venue of a small Comedy Club  a fact that he mentioned several times over the course of the gig; but it seems that Devendra still has great affection for Manchester because of its musical history, even claiming towards the end of the show that Oasis Champagne Supernova is one of the greatest songs of all time (this comment certainly seemed to confuse the crowd who seemed unsure of how to take this alternative musician making such a statement about one of the UKs most successful & commercial bands). 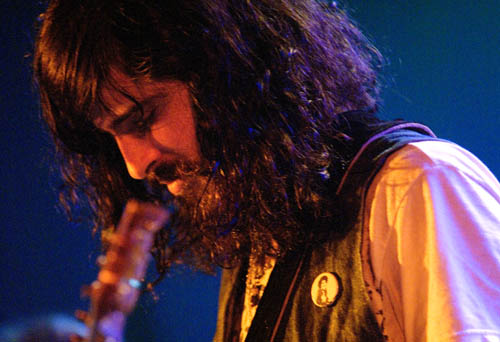 Banhart was born in Texas, but currently resides in Los Angeles & his music certainly is influenced by the psychedelic sound that came out of California in the 60s. With a voice that ranges from sweet falsetto to dark moody whispering, even his more surreal lyrics can carry a great deal of emotion. His sound has been compared to a diversity of artists such as Billy Holiday, Marc Bolan, Antony & the Johnsons, & The Doors.

San Francisco band Vetiver played in the supporting slot - this band being the project of singer/songwriter Andy Cabic who collaborates closely with Devendra & plays in his backing band (usually going by the moniker Hairy Fairy, but for the evening renamed First Woman Millionaire).

Devendra took to the stage slightly behind schedule & sang his first song acoustically before being joined by the rest of his group. The set contained several covers, including songs by David Crosby, Canned Heat & his idol, 70s Brazilian singer/songwriter Caetano Veloso. 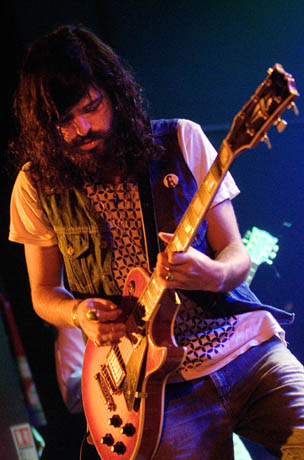 After several of Devendras newer tracks, he asked for a volunteer from the audience to come on stage & perform, saying I know someone out there must have a song to share. A young guy from the crowd that had had earlier been yelling out I love you Devendra came up to play a 10 minute epic on acoustic guitar. Devendra & the band left to give him his moment of fame while the audience supportively clapped along.

With a 90 minute performance including a mixture of slow folk, Reggae inspired tunes & several more rocky songs, there was certainly enough diversity in the set to keep the audience satisfied. Having a tight knit band behind him left Banhart free to occasionally drop his guitar (which he said he actually cant play that well) so he could throw himself around the stage. Several members of the band including Andy Cabic also provided some stunning vocal harmonies.

Judging by the crowd on Friday night, there are many young males who obviously idolise Devendra & perhaps soon, not only fashion but popular music may start to feel his influence. Perhaps EMO is on the way out & Free Love is about to return... Maybe Im just showing my age but I say bring it on.
article by: Kirsty Umback
photos by: Kirsty Umback
published: 13/09/2006 07:13