The Eagles of Death Metal

While the Manchester Academy gets a facelift, the front doors are closed off, leaving the impression that the building is derelict & deserted. Luckily, on Tuesday night, around the back was a whole different story.

Led by charismatic frontman Jesse The Devil Hughes, the Eagles of Death Metal look like they were put on Earth to do nothing but have a good time. Jesses handlebar moustache is a thing of pure beauty & with a Rockabilly quiff & some very impressive ink work on his arms; the man really comes across as Rock & Roll personified. The Bands songs are unapologetically Old School with girls, booze, & having fun their central theme  no surprise then that the title of the bands new Second Album is Death By Sexy.

The Eagles of Death Metal played a set of fast, raucous Rock to a sold out crowd that were sweating before the band even took to the stage. Greeting the audience with an enthusiastic welcome, Hughes pointed out how impressed he was by the Babies in the front row - a group of girls that had donned their own false facial hair for the night.

Strutting like Elvis & striking poses, Jesses larger than life persona went some way to making up for the absence of Queens of the Stoneage creator Josh Homme, the EoDMs co-founder & official Drummer. Band members - Guitarist Dave Catching & Bassist Brian "Big Hands" O'Connor were both on form, showing plenty of enthusiasm for the music, but wisely sticking to the edges of the stage, giving their lead singer plenty of room to move. 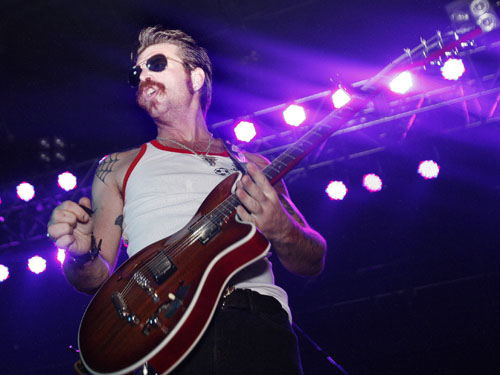 In between pausing to comb his hair & getting pelted with underwear, Jesse & the band belted out tracks from both the new release & the 2004 record, Peace, Love, Death Meta, including Whorehoppin & Bad Dream Mama, current single I want you so Hard (Boys Bad News) before finishing off the night with a raw, thumping cover of the classic, Brown Sugar.

While the Eagles of Death Metal play quality music, theres definitely a fine line between the reality of the performance & caricature. Maybe being from the USA where irony is scarce, the band are able to enjoy acting as they do without feeling as if they have to resort to becoming parodies of themselves & thank god thats the case. 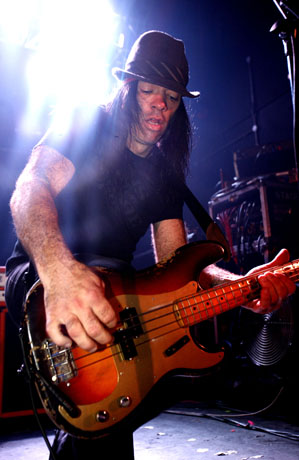 The songs may all sound fairly similar & theres no denying that the band arent trying to break any new ground with their sound. If anything, their aim is to take us back to the days when Rock meant rebellion - when fathers wore cardigans & the Fonz was a style icon....Cool.
article by: Kirsty Umback
photos by: Kirsty Umback
published: 24/08/2006 11:57