Its the 6th of the 6th of the 6th & while online evangelical nutters warn about the coming of Armageddon, I cant think of a better way to celebrate this date than to attend old school Metal Band Twisted Sister playing the Manchester Academy.

After touring in support of Alice Cooper late in 2005, Twisted Sister are back in the UK again as part of their 30th Anniversary Tour. Seeing this band play live is pure musical entertainment & even after performing for 30 years, the (just about) original members of the group still look as though they are having a lot of fun performing their songs to a crowd.

Supported on this tour by Hanoi Rocks (who definitely did!), it was a full night of pure Hard Rock indulgence, complete with sweat, beer & spit. Twisted Sisters front man Dee Snider may be a 52-year-old man with a face resembling Barbara Cartland, but his energy levels never waned. The rest of the group all took their turn to strike Rock poses at the front of the stage during their solos & watching them interact with each other, its hard to believe that for several years none of the band mates were even speaking to each other. 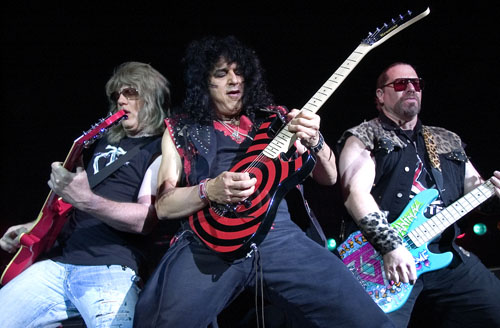 Twisted Sister arent trying to be clever or ironic with their Rock & Roll rebellion act & its probably because of this that they havent fallen into the trap of becoming a camp nostalgia show. Judging from the amount of girls trying to make it back stage, the band still has contemporary appeal & for every balding guy wearing a heavy metal t-shirt in the crowd, there were just as many young fans present.

A bunch of men in their 50s wearing makeup & singing about teenage rebellion really shouldnt work, but 1983 singles 'The Kids are back' & 'You Can't Stop Rock'n'Roll' at the start of the set really set the tone of the evening.

The band obviously know that their audience are a loyal bunch & Guitarist Jay Jay French said as much after a short tirade against Simon Cowell & the whole Reality TV Idol phenomenon. Many of the songs performed were never released as singles, such as 'Shoot em Down' & 'Under the Blade' from their 1982 Debut Album, but still the fans sung along with every word. One member of the mosh pit even held his crutches aloft for almost the entire show. Whether it was because he was trapped by the crowd & looking for help or because he had been miraculously cured, I dont know. 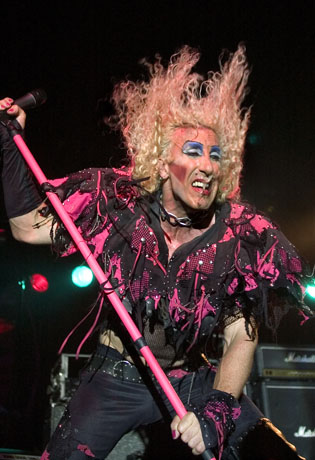 I must admit that the highlight of the show for me was the Bands best-known song, We're Not Gonna Take It. I dont think Ive experienced a more unapologetically Rock & Roll moment in all my gigging experience. Not only did the hard core fans go absolutely crazy, but those people on the fringes of the crowd & even the Bouncers sung along with their fists in the air.

Unfortunately, after their shows in Glasgow, Manchester & Wolverhampton, the band have decided to cancel their remaining European dates in order to get back to the States & start Recording a new Album. This means that their London & Nottingham gigs have been cancelled & for the fans in those cities, my condolences. As Dee sung at the end of the set, 'I know its only Rock & Roll, but I like it!'
article by: Kirsty Umback
photos by: Kirsty Umback
published: 12/06/2006 10:31