So the grunge revival continues apace as now Dinosaur Jr hit town, and with the classic line up of J Mascis, Lou Barlow and Murph  all a little paunchier and in Murphs case, completely shaven headed.

If the motivation for the reform is cash, then they could be a little disappointed. The Academy is far from arena size yet is only half full with loads of space to rattle around, and any 10-years-older crowdsurfer looking for some back in the day fun is running the risk of making a spectacular tit of himself. That said, the merchandising might make up the shortfallsales of the classic cartoon cow t-shirt were brisk, although your writer still has his original on gym rotation. 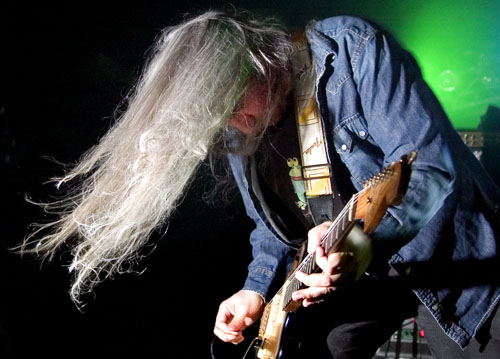 Age appears not to have compromised them though and from the first note the audience is presented with a wall of guitar noise that fills the empty spaces, the vocal incomprehensible through the thrash of just three instruments.

For half an hour its all a bit too much, despite the presence of the relatively poppy The Wagon early in the set. Mascis looks terribly uncomfortable at the microphone, swinging from side to side like a lunatic in a straight jacket, whilst ecstatically happy when not singing, wielding his guitar with true rawk style his longs grey locks, which had a natural straightness most women would die for, flailing randomly. 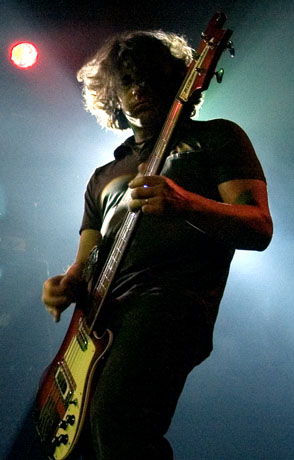 Then suddenly, it clicks. Its almost as though were just no longer accustomed to hearing our music at this volume, and with this intensity, and the brain takes time to tune into the its wavelength. But quite out of the blue, the cobwebs have been shaken from the ears and the riffs that underlie the songs are now easily identifiable, and the gig becomes infinitely the better for it.

Every song is elongated by a couple of minutes more than it needs to be until the glorious encore Freak Scene. Their most popular effort is actually shortened, tossed off in a startling show of confidence. Bad bands stretch their best tunes to milk as much as possible from their audience (remember how James turned Sit Down into an almost 15 minute epic?) but a good outfit can do it this way, challenging the audience with a you think that is good, then listen to this.

Sadly, the rock and roll attitude hasnt completely been embraced, and theyre off and back again for a pointless second encore, but ending on a high with their extraordinary version of Just Like Heaven, albeit to an even smaller audience, many leaving assuming they were finished.

With new material being mooted, it seems as though Dinosaur Jr are going to hang around for a bit. That must worry all the modern day imitators, because when Mascis, Barlow & Murph become a relevant act for today, rather than something of a nostalgia trip, there is every chance a new generation of kids will be totally blown away.
article by: Jonathan Haggart
photos by: Kirsty Umback
published: 22/05/2006 17:11