The Yeah Yeah Yeahs typify a New York aesthetic that is so achingly cool that some music journalists have dismissed the groups music as being all style & little substance. With lead singer Karen O at the helm, its easy to see how the performance of such a sexy & charismatic woman could overshadow the underlying musical talent that the band members (including herself) display.

The band played Manchester as part of their current European tour on a typically rainy Saturday night.In doing so, the American trio were able to prove to their Northern UK fans that their admiration of the band is justified in being more than just skin deep, even though some members of the crowd may have arrived looking as though they were there not to see a concert but a fashion parade. 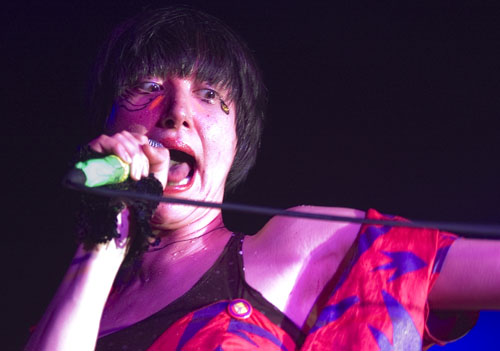 The trio perform their take on 70s pre punk art pop with such obvious pleasure that its hard to resist being mesmerised by whats happening on the stage. Channelling the spirit of a young Debbie Harry, Karen O seemed to feed off the audiences obvious admiration as she preened, posed & spun around the stage for the duration of the set. Wearing a tulip cut mini dress; the bands front woman went on to semi strip, spit water into the air & drape herself with a sequined scarf before wrapping herself in her microphone cord & cracking it like a whip around the stage.

The band concentrated on material from the new LP Show Your Bones during the 12 song set including Cheated Hearts & Way Out to begin the show. Only Pin from 2003s Album Fever To Tell was played before a seamless transition into newer release Gold Lion. This crowd favourite was then followed by current single Phenomena about half way through the performance. 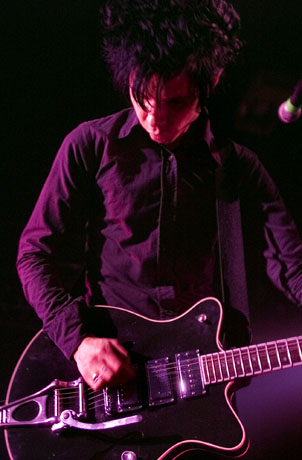 After these better known tracks, the band took a break from the newer, more radio friendly material to perform two songs from their 2001 self-titled EP with Art Star followed by Miles Away. With guitarist Nick Zinners screeching chords & Karens erratic hiccupping vocals, it was interesting to see how far the band have progressed over the last five years from the heavy influence of New Yorks former CBGBs style experimental rock/punk era to using this inspiration to create their own sound.

The usual trio that make up the Yeah Yeah Yeahs seems to have gained an extra musician for the current tour, with a new male member hidden at the back of the stage. Perhaps since the band doesnt usually contain a bassist, they felt they needed some help in reproducing their full sound in a live environment. 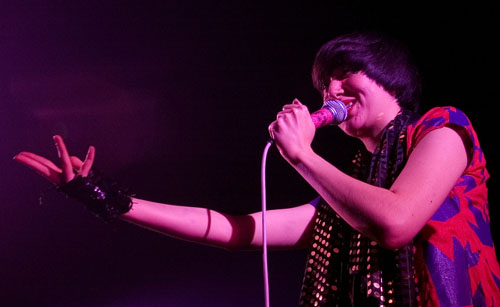 Drummer Brian Chase as well as Zinner gave a faultless instrumental performance but both fade into the background with Karen O at the helm. Returning to the stage for the encore to play their biggest single from 2003, Maps, the crowd sung along with Karen as she wailed the lyrics Wait, they don't love you like I love you sounding as though her heart could break, even though she must have sung this song countless times. Finishing the show with new song Turn Into seemed at first an anticlimactic choice, but I guess wanting to leave the crowd on a high, the plodding pace of its beginning soon drew to a frenetic instrumental climax.

Leaving the stage abruptly to the sound of squealing guitars, the band seemed to leave the audience a little stunned. As if waking from hypnosis, many of the well-dressed crowd seemed to walk from the building amazed not only at what they had seen & heard, but also at how it had made them react. As one girl said to her friend as they teetered out of the building on their heels, Its my blue eye shadow thats making my eyes look so red, but at least Im not as sweaty as you.
article by: Kirsty Umback
photos by: Kirsty Umback
published: 22/05/2006 15:13