After being hailed by the British Music Press as The future of Rock in 2002, things have continued to motor along quite nicely for The Datsuns  a riotous four-piece from Cambridge, New Zealand.

The bands current tour, taking in 11 UK cities from Stoke on Trent to Portsmouth has been undertaken on the back of their new EP release Stuck Here for Days. When they hit Manchesters intimate Academy 3 halfway through their run of dates, The Datsuns showed their Northern fans that in the two years since their last release, theyve lost none of their energy or enthusiasm. 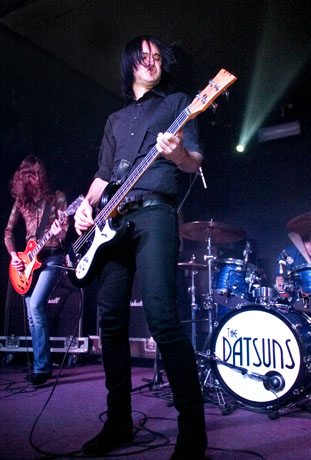 The bands set began with Kick & A Bang off the new EP before continuing their gig with a set made up in the most part with songs from their 2002 self-titled release, as well as several tunes from 2004s Outta Sight, Outta Mind. With no barricades between the mosh pit & the stage, it wasnt long before it was necessary to call on the multi tattooed Roadie to help push crowd surfers back into hands of the sweaty masses.

The audience seemed to be made up in large part by fresh-faced young boys wearing Datsuns T-Shirts & older guys with Led Zeppelin writ large across their chests. You cant escape the fact that the band owe a great deal to Page & Plant, especially in their searing guitar riffs & vocal wails & grunts, but the beauty of the Datsuns is that their approach to this style of musical cock rock excess is done not only with a great deal of passion, but without a hint of irony. This kindve gives you permission to enjoy it for what it is and a rock group that makes a fan feel so exhilarated by their music that they feel like playing the air guitar can certainly not be denied! 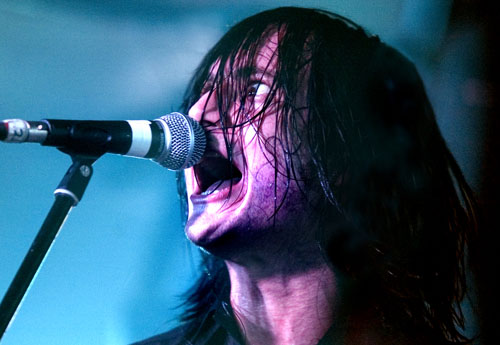 Crowd favourites included better-known singles such as MF From Hell, In Love & Harmonic Generator (which saw guitarist Christian dive into the crowd), but there was certainly no letup from either the fans or the group until the encore.

The Datsuns formed at school over ten years ago, but they still play like theyre overflowing with adolescent hormones and attitude. In an era when even Metal bands have short haircuts, it great to be able to go & see a group that arent afraid to throw themselves around a stage or to really sweat. While the bass may have been a little loud, drowning out some of the more subtle aspects of individual songs lyrics and riffs, there was no denying that the band managed to keep the audience fully enthralled from go to whoa. 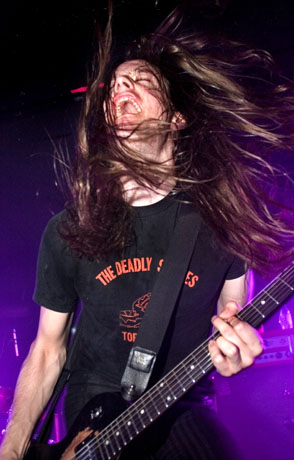 Finishing off the night with Fink For The Man, lead singer Dolf de Borst dove into the pit, only to emerge with some hapless punters mobile phone. Talking to a guy called Tom on the other end of the line while rest of the band kept perfect time, Dorf asked Why arent you here? If I were Tom, I wouldve been asking myself the same question.
article by: Kirsty Umback
photos by: Kirsty Umback
published: 28/04/2006 09:37

more about The Datsuns
more about Academy 1, 2, 3 & 4 (Manchester University), Manchester