Playing at Manchester's Academy 2 on Friday, Blues Explosion gave a performance that would have electrified the biggest of stadiums and Jon Spencer became my new god of rock.

From the onset it was clear that Blues Explosion were there to give it all; blood, sweat, tears and an awful lot of spittle from front man Jon. The set was rattled off at a pace that exhausted the mere onlooker, Jon writhing around close to the ground, Russell playing the drums like he's feeling the full force of a 50,000 volt injection to his flailing arms and Judar's rhythm guitar providing a calming stability throughout. 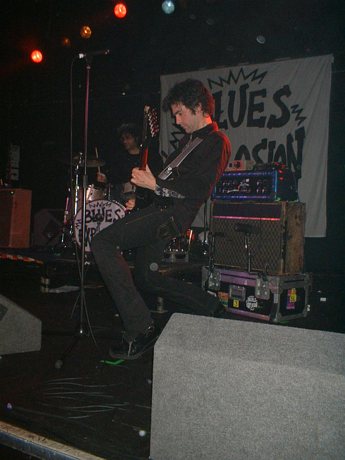 New singles Damage and Burn It Off sounded great next to crowd favourites' She Said, Sweet N Sour, and Talk About the Blues. The pinnacle of the gig came with the last song before the encore, which had possibly the longest rock ending ever witnessed. Just when you thought it had to end for fear of a band member collapsing, or indeed exploding, from fatigue they turned the amps up to eleven and hit the crowd with more and more powerful blues and rock filled joy.

Jon Spencer worked the crowd like a rock and roll preacher man with even the harshest critic denouncing all previous musical loves to become a convert to the church of Blues Explosion. All in all this proved to be an excellent night of top quality music with student union beer prices, what more can you ask for from a Friday night in Manchester?!
article by: Michelle Evans
photos by: Michelle Evans
published: 11/11/2004 09:22