While coronavirus fears are infecting the globe, a night of ‘80s Bay Area thrash metal stops in Glasgow. Testament, Exodus and Death Angel compose the Bay Strikes Back European tour and this is the first time all of these old friends have toured together, surprisingly. There are no other bands so this is a guaranteed 100% high quality line up. The doors of the city’s Barrowland Ballroom open earlier than usual to try and cram as many headbangers in before the first act.

It’s strange opening a gig with energetic thrashers Death Angel, erupting on stage like headliners with the title track of last year’s album ‘Humanicide’. From the get go, this explosive four-piece serves up chunky contemporary thrash with a side dish of frenetic momentum. ‘Mistress of Pain’ from the classic ‘Ultra-Violence’ debut is classic unrelenting Bay Area thrash. Mark Osegueda’s idiosyncratic shouts sound just as good as their 1987 counterpart and his non-stop movement makes him the perfect thrash frontman. The Californians look elated to be on stage, alternating between smiling and headbanging throughout the whole set. 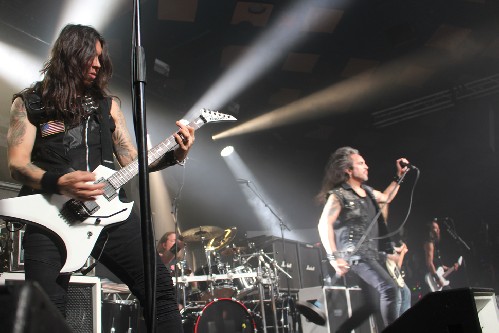 Songs fired out come from throughout the band’s career.  The creatively melodic ‘Voracious Souls’, the neo-thrash ‘The Dream Calls for Blood’ and bone-crushing groove-riddled ‘Seemingly Endless Time’ are highlights of the set. Guitarist Rob Cavestany is a sight to behold, shredding satisfying solos and a diverse range of thrash creations. As to be expected, a twisting maelstrom of a mosh pit sprawls all over the centre of the Ballroom, while security get busy apprehending crowd surfers. The devastating twin attack of ‘The Ultra-Violence’ and ‘Thrown to the Wolves’ punctuates the end of Death Angel’s set and the applause is sonorous. Death Angel promise to return soon, so fingers cross another sojourn to Glasgow appears in their plans before long.

The early door time means the venue is still filling by the time the legendary Exodus take control. This Bay Area militia fire off with ‘Body Harvest’ from their most recent full-length ‘Blood In, Blood Out’. Exodus with vocalist Steve ‘Zetro’ Souza is a brilliant killing machine. Newer Souza-era material, such as the catchy track ‘Blood In, Blood Out’, the nearly 9-minute juggernaut ‘Deathamphetamine’ and the unforgiving ‘Blacklist’, storm all over the attendees. Of course, fans want to hear the classics from thrash metal’s heyday and ‘And Then There Were None’, ‘Fabulous Disaster’ and ‘Bonded By Blood’ receive a rapturous response. 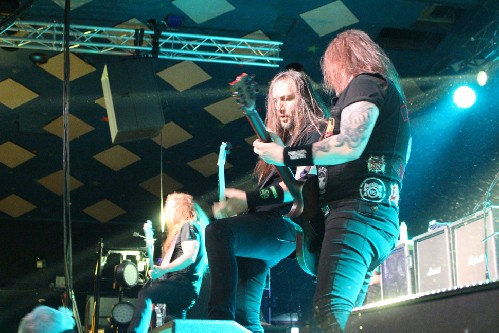 Exodus don’t shy away from being ambassadors for what they term ‘good friendly violent fun’. The thrashers’ reaction tonight undoubtedly makes the band grin. Bodies are flung towards the ground and the air. Crowdsurfing is too mild a term; a crowd tsunami better describes the bodies accelerating over the security barrier. The Americans mirror this energy on stage; guitarist Gary Holt shreds like a motherfucker and drummer Tom Hunting commits battery against his kit. Naturally, ‘Toxic Waltz’ sees what’s easily the biggest pit of the show, a real thrash storm swallowing most of the spectators. There’s still one more opportunity to thrash with Exodus. ‘Strike of the Beast’ is introduced by a quick jam of ‘Raining Blood’ and ‘Angel of Death,’ a worthy tribute to Gary Holt, who played in Slayer following the death of their guitarist Jeff Hanneman. This chaotic closer whipping up a brutal fervour and feels like a studded leather fist to the face. It’ll be very challenging for Testament to surpass this performance.

Starting with the ‘80s classic ‘Eerie Inhabitants’, headliners Testament swing into full force with teeth-gnashing tasty thrash. This flows into ‘The New Order’, raising both the roof and temperatures in the mosh pit. Guitarist Alex Skolnick is the quintessential thrash axeman, weaving bristling riffs with the odd, highly accomplished melodic accents. Platforms on the stage allow him to gain a vantage point so even those at the very back of the ballroom can bear witness to his fiddly solos. Eyes closely stalk drummer Gene Hoglan and his huge metal CV of experience as he punishes his kit. ‘The Haunting’ and ‘The Preacher’ continues the vintage metal pageant with phenomenal results. Vocalist Chuck Billy’s voice is thunderous and his stage presence is commanding. 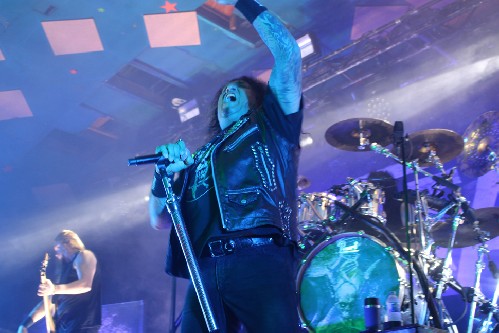 ‘Dark Roots of Earth’, ‘Last Stand for Independence’ and ‘Throne of Thorns’ admittedly dial down the momentum but still secure a hearty response.  The most pit isn’t as brutal as it was for Exodus but it’s safe to assume the participants exhausted themselves to the prior band. Next month, Testament unveil new album ‘Titans of Creation’ and preview two tracks tonight: ‘Children of the Next Level’ and ‘Night of the Witch’. They’re typical 21st century Testament fare and are chased down by the magnificent ‘Into the Pit’. This ignites a brief best-of Testament segment as the dominating ‘Practice What You Preach’, the headbanger ‘Over the Wall’ and closer ‘Disciples of the Watch’ rip through the venue. Unfortunately, a sizeable chunk of the crowd has left and Billy thanks those who stick around, aware of those who need to take the last train home. The crowd delivers a mighty roar of approval to these thrash titans as they leave the stage.

Testament put on a wildly entertaining performance, but it’s hard for them to compete with the brute force of Exodus’ show. All three Bay Area thrashers delivered the goods, unaffected by age after 30 years of thrashing. Here’s hoping for another 30 years more!