The Darkness are national treasures, especially in and around East Anglia where the band grew up. One night removed from playing a sold out show in Norwich, the band find themselves in an equally packed Corn Exchange in Cambridge. There is joviality aplenty in the crowd as they await their heroes during this festive season.

First up however we have the opening act, the very impressive REWS. Playing an infectious mix of rock and pop the three-piece are received well by an audience waiting patiently for their heroes. This isn’t my first time catching REWS live and each time they have thoroughly impressed me. With a second album being teased on the horizon hopefully this great young band can continue to grow. 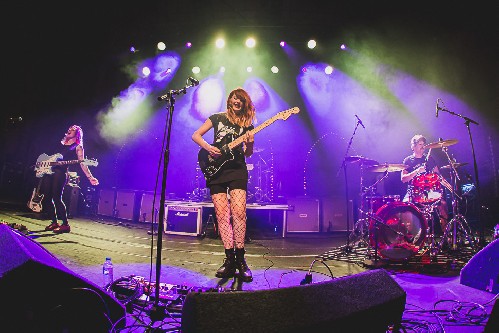 If they need any lessons on how to put on a live spectacle then they should look no further than our headline act, The Darkness. From the first note to the last, tonight they put on an exhibition on how to captivate a crowd. Be it during the often humorous onstage banter of frontman Justin Hawkins or when the band are rocking hard, there is barely a moment for the crowd to divert their attention away from the stage.

As we all know by now The Darkness shot to fame back in 2003 with the release of their stunning debut album ‘Permission To Land’. Alas by 2006 the band had ruptured and eventually split. Thankfully come 2011 the band were back in our lives and they have been a constant presence on the live circuit ever since. Even though they have continued to steadily release new music since reuniting, the bands live set lists have somewhat understandably remained overloaded with ‘Permission To Land’ tracks. 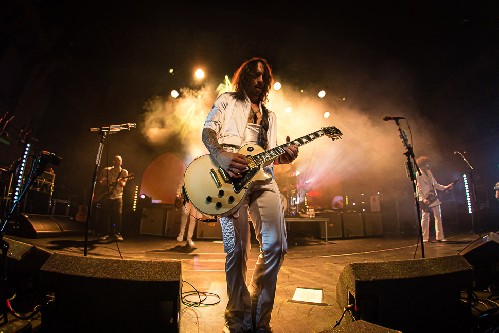 Not a problem if you are watching them for the first time, but for the bulk of their diehard fanbase, the lack of other material has been occasionally frustrating. That frustration is completely gone however, as for this tour the band have mixed things up considerably. The release in October of new album ‘Easter Is Cancelled’, was met with very favourable reviews. The band, showing their utmost faith in the record, has therefore decided to play not just some of it, but all of it! 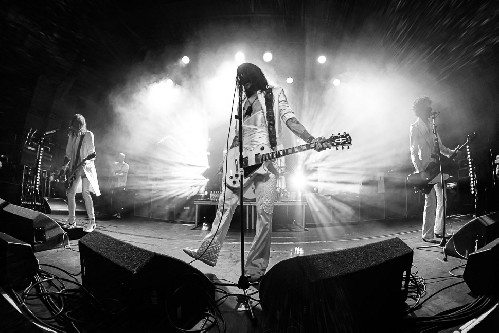 The format for the tour is that their show is separated into two distinct sets, with first up its ‘Easter Is Cancelled’ in full. Kicking off with the theatrical ‘Rock And Roll Deserves To Die’, the band ploughs through the record in order before finishing with ‘We Are The Guitar Men’. Throughout the set the reception from the crowd for the new material is very positive to the delight of the band.

After a very brief intermission the band are back onstage following an outfit change to deliver a run-through of some of the classic material. It’s refreshing to me that even now the band don’t resort to simply rolling out almost all of ‘Permission In Land’. In fact only five of the ten tracks in this portion of the set feature from their debut. To me this presents us with perhaps the most varied set list the band has ever played, much to the delight of their regular fanbase. 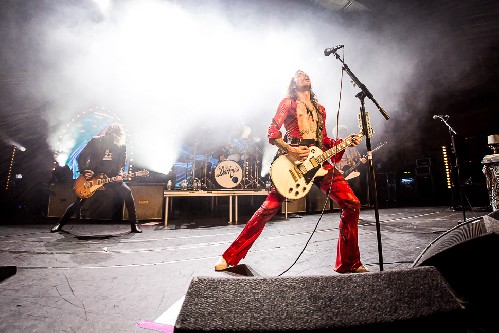 First time attendees need not worry however as the likes of ‘One Way Ticket’, ‘Growing On Me’, ‘Love Is Only A Feeling’, ‘Givin’ Up’ and ‘Get Your Hands Off My Woman’ are all there. The Darkness do appear to be at the peak of their powers at the moment with newest member Rufus Taylor on drums, now seemingly part of the woodwork. By the time the band close off their second set with the mega hit ‘I Believe In A Thing Called Love’ the crowd have gotten more than their monies worth.

There is still time however for a quick encore. It is December after all and the man in the red suit will soon be with us, so what better way to end the evening than with a festive sing-a-long to ‘Christmas Time (Don’t Let The Bells End)’. With that The Darkness disappear into the night and off to their next tour stop. If you can, you should definitely join them before the tour finishes, as they are in phenomenal form. Long live The Darkness, an