It is irrational to blame The Wonder Stuff for the sudden feeling of aging and the sensation that my life is flashing before me as I walk into the ballroom at the O2 Academy. But the realization that it is thirty years since I purchased their seminal, second album hits me quite hard. It is barely past 6pm. The room is almost empty but with bodies filing in constantly, it will soon fill up. The stage looks magnificent and the effect of seeing it fills me with excitement. So despite feeling decrepit and the fact that we’ll all be on our way home by 10pm, I am most certainly up for this celebration of English music and culture.

At 6:30pm the show starts with the lovely Jim Bob from Carter USM playing a smattering of Carter USM hits on his acoustic guitar. As a teenager I remember Carter’s mix of folk, punk, electronic dance music and intelligent lyrics loaded with cultural references being a breath of fresh air. These songs work very well acoustically. I should imagine they were originally crafted in this way and I adore Jim Bob’s guitar technique. It is like an ultra-melodic machine gun and he rattles round after round into the audience. Thirty minutes of singing along to half-remembered choruses (and the strong cider) is excellent preparation for the main course. 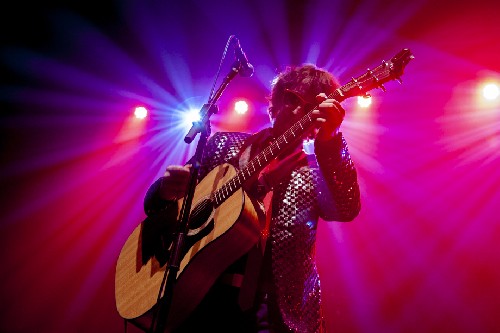 Jim Bob is wearing the most sparkly jacket I have ever seen. It seems to amplify the light around it making the wearer seem ethereal and angelic. He plays a short but passionate set including (in no particular order) songs such as: 'Only Living Boy In New Cross', 'A Prince In A Pauper’s Grave', 'Billy Smart’s Circus', 'After The Watershed', 'Anytime Anyplace Anywhere' and 'Midnight On The Murder Mile'. 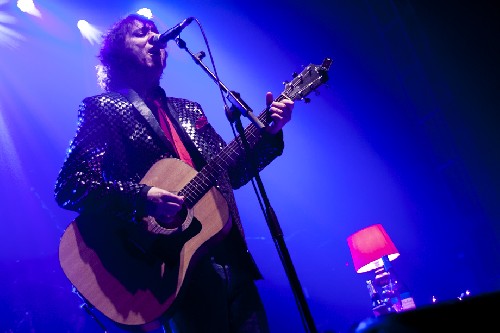 Now it is time for the main event. This promises to be a marathon set with two complete albums to get through but first The Stuffies will be showcasing songs from their latest album “Better Being Lucky”. This album is their 9th studio album and comes exactly thirty years after "HUP". This fact alone explains the matured, fine wine flavour of the newer material compared with the soda pop taste of say the “The Eight Legged Groove Machine” songs. They sound complex, musical. Cathartic and revealing. Always compelling and loaded with the devastating sarcasm and razor sharp wit that Miles Hunt, The Wonder Stuff frontman is legendary for. 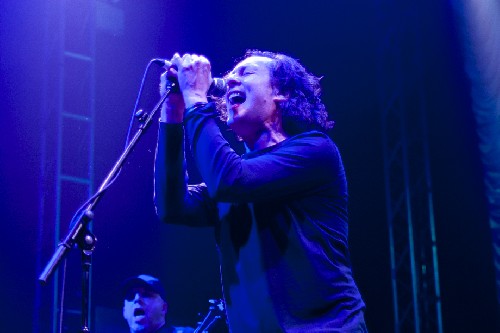 They open the show with “Feet To The Flames”, the opening track from BBL. Miles has always looked great with guitar in hand, singing his heart out. But together with Erica Nockalls on the fiddle stood beside him, they electrify the stage in a way that is quite unique and is awesome to witness. “Lay Down Your Cards”, “No Thieves Among Us” and “Don’t Anyone Dare Give A Damn” fill out this opening section. The music sounds great but being the first time I have ever heard these songs, they kind of blur into one another. All the same, it is reassuring to hear that there is much life left in this band. Exciting to think that their best work, after all these years, might still be waiting to come. “When All This Is Over” is the last track of the BBL section. I believe Miles declared this to be the best song he’s been involved in. Or maybe that was the song before. Hard to remember now the cider is kicking in and I am so very happy to be here. 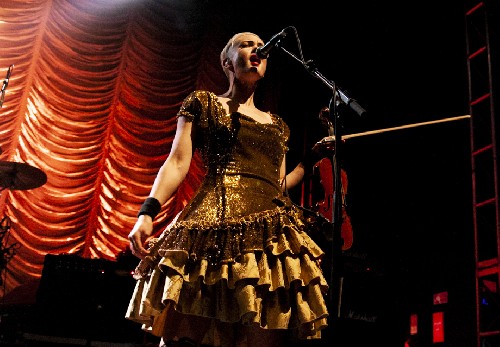 The band enjoy a fifteen-minute comfort break after the opening salvos. Again, I am reminded that the sand in our collective hourglasses is at least half way passed. However, with over thirty songs to get through, this can not only be forgiven, it is probably very necessary. The band reappear to begin HUP. Thirty years have done little to dull the shine of this album. All the way back then I remember feeling it would be a tall order to top tELGM (the Eight Legged Groove Machine, doh) with so many catchy songs on that first album. However, largely they succeeded with unforgettable classics such as 'Golden Green', 'Cartoon Boyfriend' and 'Don’t Let Me Down, Gently'. My favorite has always been 'Piece Of Sky'. I savour the goose bumps and memories of other Stuffies’ shows as it is played. I’m so happy to have grown up to these tunes and awed that the timeless nature of sincere, honest music endures throughout a lifetime. 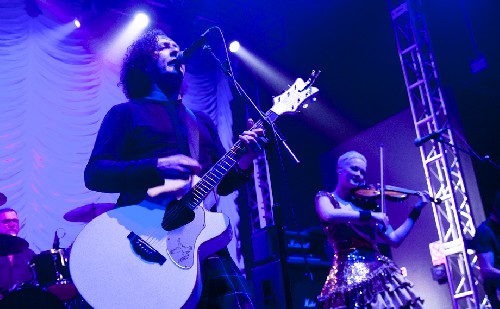 I expected the band to take another break before The Eight Legged Groove Machine but no chance. These guys and girl have built up a head of steam that is now unstoppable. What follows is an intense, highly enjoyable singalong. Everyone here knows every lyric to these songs. The band are tireless and play each song with the vigor they deserve. I realize that I may never see The Wonder Stuff play these songs so comprehensively again. It makes the experience all the more precious as I allow my senses to drink it all in. What a band and what a great night out'. After the glorious celebration of tELGM, what other song could we possibly finish on except 'Good Night Though' which was conspicuous by its absence in the HUP set. Good Night ‘Stuffies and good night Leeds. Thank you for everything.

Feet to the Flames

Lay Down Your Cards

No Thieves Among Us

Don't Anyone Dare Give a Damn

When All of This Is Over

30 Years in the Bathroom

Let's Be Other People

Don't Let Me Down, Gently

It's Yer Money I'm After, Baby

The Animals and Me