Benjamin Franklin famously suggested that nothing can be said to be certain, except death and taxes. I think that we can add Hawkwind to the list. They seem such a permanent, if peripheral, feature of the British musical landscape that it’s surprising they’ve only been around for fifty years. More an institution than a band, over a hundred people have passed through Hawkwind’s revolving doors in that time, with septuagenarian Dave Brock as the constant gatekeeper. Rather like a football team, fans remain loyal despite a changing roster of players and a continually evolving style of play. Perhaps a religion is a more fitting analogy - albeit one where their actions and output can test the patience of the faithful. Fitting, then, that for the final performance of their anniversary tour, they chose the cathedral- like grandeur of the Albert Hall. 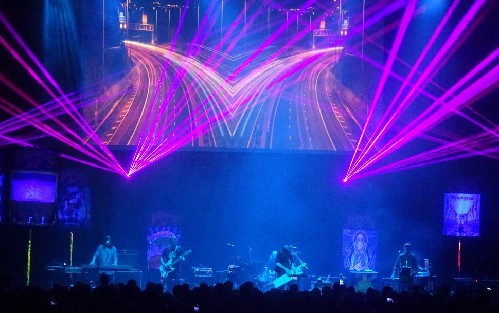 It was a grandeur that might have overwhelmed Chrissy Mostyn and Rick Pilkington, as the duo played a brief warm up set under their Blackheart Orchestra moniker, but they just seemed thrilled to bits to be there. It was a shame more of the masses winding their way through the Hall’s labyrinthine corridors didn’t find their way to their seats in time to hear Mostyn’s elfin voice backed by Pikington’s considerable musical talent. With the Hall still half empty it somehow looked even bigger, as did the stage as they stood front and centre - Hawkwind’s gear already set up and stacked up behind them – as they bravely soldiered on. Offering up a rich and layered sound (all played live, I am assured) it made for a pleasant, if unassuming, start to the evening.

All fans have their story to tell and much like other people’s dreams they oft don’t bear repeating, but given that this concert was largely a retrospective of the band’s huge body of work, perhaps you’ll excuse me the anecdote that the opening song of the night was pretty much the first Hawkwind tune I ever heard them play live. Ginger Baker was on drums that night but I have to say Richard Chadwick acquitted himself admirably here, pounding his way through Motorway City with gusto and energy. Chadwick has been with the band for thirty years and has become a rock and anchor for the rest of the band. Later on, he would charm us with his solitary vocal contribution, but then that was Silver Machine, with which you can hardly go wrong.

It was a great start, but next up, inexplicably, was Star Cannibal, a lame curiosity from the unloved Church of Hawkwind Album. Only now do I get why – it’s been retooled as Flesh Fondue and slapped on the new album – but I still think it a poor song. More thin gruel followed (the new stuff really not measuring up) before Born to Go put things back on track, swiftly followed by the mighty Spirit of the Age. A pattern emerged, as one truly great (and old) song flip-flopped with another not so great (and newer) song. They have to play the latest tunes – I get that – but set them beside the brilliance of Golden Void, or Assault and Battery or Right to Decide, and you have to wonder if a show celebrating fifty years might have been better served by the inclusion of Brainstorm, or Orgone Accumulator or Shot Down in the Night. 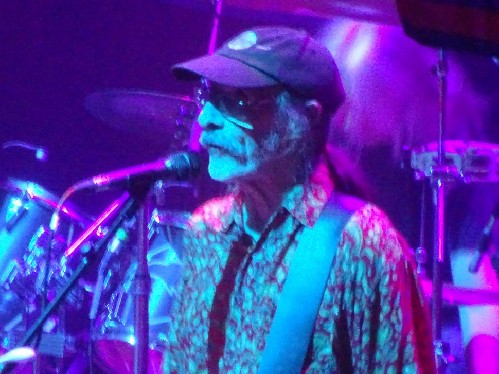 Dave Brock was in fine voice, with a souped up Hurry on Sunday a highlight of the show. Tim Blake was great on Theremin, making the best wibbly wobbly noises since the days of Del Dettmar. Guest Phil Campbell seemed to lift the whole band with his appearance, thrashing his way through Silver Machine as he’s been doing with his own band on tour. But I’d be fibbing if I didn’t admit that Magnus Martin struggled. With neither the charisma of Ron Tree nor the talent of Arthur Brown, or the mix of the two Mr Dibbs had in spades, the lack of a lead vocalist is a problem that needs solving.

The show itself was visually stunning, with someone called Brian rightly name checked for his retro lasers. He did a fabulous job of making the Hall part of the show, with lasers bounced off and around its Victorian architecture to stunning effect. I was surprised there was no theatrics, but perhaps this mash up of greatest hits didn’t lend itself to the usual mix of dancers and mine. I was surprised we didn’t get more guests. Blackhawk Orchestra came on for a while and there was an unidentified fellow with a hat at one point, but not much else. Nonetheless, taking in the lights, the lasers, the projections, and the floor-to-ceiling layers of people, I was left in no doubt that this was an impressive and special place to round off fifty years. 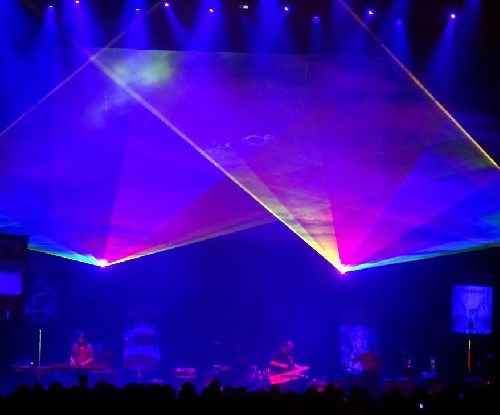 There were some grumbles from folk in the audience that we didn’t get an encore (many refused to leave for an age, locked as they were in disbelief) but I think that unfair. I took the view that they played up to the wire and left the best – Masters of the Universe – until last.  I’ll concede it was a bumpy ride getting there, and this may not have been the finest Hawkwind gig I’d ever seen, but let’s be sensible about this. I’ve seen them play with Nik Turner, Ginger Baker, Hugh Lloyd-Langdon, Harvey Bainbridge and Lemmy. I saw them at Stonehenge, playing as the sun came up, and even on my twenty-first birthday when the two dates happened to collide. In short, the band and I have a lot of history, something I am sure was true of practically everyone in the Albert Hall. They were never going to compete with the reconstructed memories of yesterday. What I can say is that the night evoked those memories, and largely did so with style and spectacle. I look forward to the hundredth year celebration in 2059.