Outside the Corn Exchange in Cambridge tonight it’s very wet and very miserable. Inside however is much different as not only is it thankfully dry, but there is a cheerful sense of occasion. Yes, for the denim jacket wearing classic rock connoisseurs of the Cambridge area, tonight would have been a night long marked in their calendars. For tonight Cambridge welcomes not one but three of the most popular classic rock bands to be born in recent years. 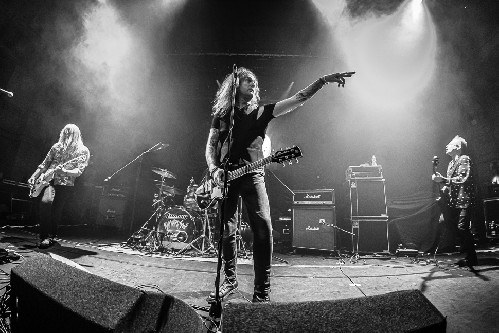 Up first are Wayward Sons. This is actually my third time seeing them in the past couple of months as they promote their new release ‘The Truth Ain’t What It Used To Be’, and it’s by far the most impressive. Toby Jepson and co have garnered a very impressive following already and there is an array of Wayward Sons t-shirts on show in the audience. I shouldn’t be surprised therefore that despite the fact their new album has only come out today, the fans are singing back every word of songs such as ‘Any Other Way’, ‘Little White Lies’ and ‘The Joke’s On You’.

The new material stands up well with that of their debut album ‘Ghosts Of Yet To Come’. It must be said however that ‘Until The End’ is still the biggest moment of their set, and it’s also the song that closes the set tonight. It’s an experienced performance that knows exactly how to engage the already healthy crowd. I actually think that most attendees at tonight’s show were in the venue ready for not just Wayward Sons, but our next act Stone Broken. 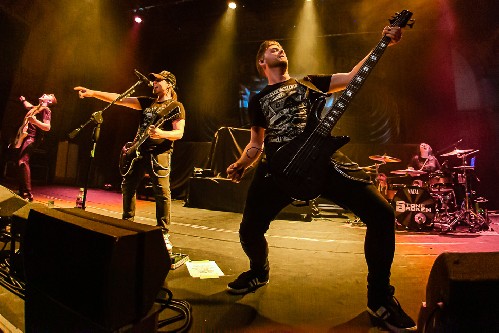 Stone Broken are another band that seem to have achieved a loyal fan base very early in their careers. It’s clear to see why from the moment they take the stage and burst into ‘Stay All Night’. The band has song writing skills that create music that is very easy to dance and sing along to. Their music has a very American radio rock appeal about it, but in my opinion that’s not a bad thing. Close your eyes and they sound like a mix of Black Stone Cherry and Nickelback.

They already have some big songs of their own however, and ‘Wait For You’ creates a special moment within a very good set. As the band finish off with ‘Worth Fighting For’ and ‘Not Your Enemy’, it’s hard to imagine the night can get much better. But it can, for of course we still have our headliner to come. 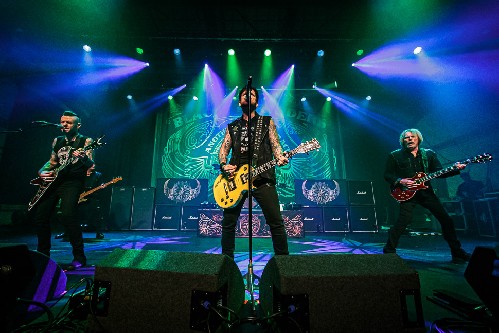 That band is Black Star Riders, who old school fans will know formed when the last regularly touring line-up of Thin Lizzy decided to write new music. Fast forward seven short years and anybody new to the band may not be aware of this fact, except for the obvious influence on the music. For when the band first formed a typical set list would see a 50/50 split of new music and Thin Lizzy classics. Catching the band a year or so back and they were down to just the one Lizzy number. Now with this tour they are fully reliant on the bands own material with no Lizzy tracks at all.

This is a fantastic testament to the quality of music that the band has produced in those seven years and fully vindicates their brave decision at the time. Black Star Riders has fully evolved into its own entity and this evolution has included a number of line-up changes, the biggest of which came at the end of last year when founding member Damon Johnson departed. 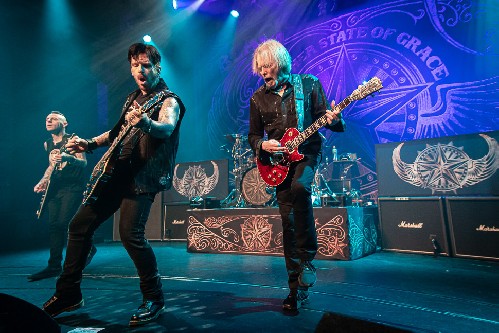 For this reason I was intrigued to see what impact that loss would have on the group going forward. It’s clear from the early stages of tonight’s performance that the band hasn’t lost a step. As they rattle through ‘Another State Of Grace’, ‘The Killer Instinct’ and ‘All Hell Breaks Loose’ it’s obvious that the new guy, Stone Sour’s Christian Martucci, is a great replacement. Martucci is clearly thrilled to be on the stage and as singer Ricky Warwick admits appears to have breathed fresh life into the group.

‘Testify Or Say Goodbye’, ‘Hey Judas’ and ‘Soldierstown’ all receive fantastic receptions from the audience, but so do ‘In The Shadow Of The War Machine’ and ‘Tonight The Moonlight Let Me Down’ from new album ‘Another State Of Grace’. The bands fourth album certainly follows the Lizzy-tinged blueprint that has brought such success to Black Star Riders. 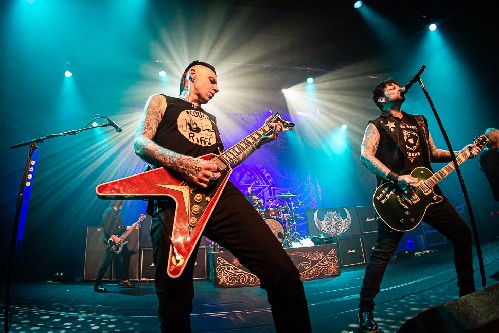 There really isn’t much let up in the pace tonight as the band play solidly and encoreless for over ninety minutes. Such stamina is impressive given their iconic guitarist Scott Gorham is fast approaching his seventieth birthday. I’m regularly left questioning the stamina of much younger acts these days whose headline shows barely break the hour mark. This tour really does as a result represent great value for money, especially considering the impressive support.

Come the final run-in of ‘Finest Hour’, ‘Kingdom Of The Lost’ and ‘Bound For Glory’, it’s hard to imagine anybody leaving without a smile on their face. It’s called classic rock for a reason, and no band tonight is breaking down any boundaries in this ever changing industry but there is also a reason rock will never truly die.