Around about the time the seventies flipped over into the eighties there was an extraordinary musical explosion that, in hindsight, punk was only the start of. In its wake was all manner of stuff going on that perhaps only now can we appreciate for its quirkiness and originality. Much of it felt ephemeral even then, while the best of it seemed of the moment – the idea that we’d be still listening to that music forty years later, let alone listening to the performers, would surely have felt fantastical at the time. Yet many at the vanguard of music during those times have not only obstinately hung around, they have enjoyed something of a renaissance. John Foxx, Magazine, Blancmange, Heaven 17, ABC and The Human League and are all acts I’ve ticked off the bucket list in recent years, having waited more years than I’d care to admit to. The greatest prize of all, however, has sadly remained out of reach, not least as Ultravox haven’t been extant for a while now. An evening in the company of Midge Ure playing the whole of Vienna was therefore not only a cause for celebration - it was the closest I was likely to get to scratching an itch. Of course, Ultravox had already put out three cracking albums before Vienna, but those were very much the babies of the aforementioned Foxx. When he jumped ship, most assumed that would be that. Instead, the introduction of Midge Ure seemed to re-energise the band, producing something leaner, polished and (of course) synthesised -finally nudging Ultravox towards commercial success. 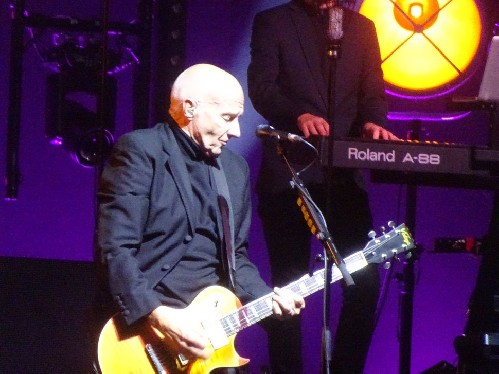 All of which goes some way to explaining why Ure has chosen to tour the entire album, starting off at the Theatre Royal in Norwich. Still a proper theatre (the gig was sandwiched between Henning When and an adaptation of Alice Sebold’s Lovely Bones) this was an idiosyncratic venue to kick off a tour, not least as Rusty Egan opened the night with a DJ set. If that sounds a preposterous idea for a seated venue, it actually worked surprisingly well, largely due to Egan’s avuncular charm. Much of his set was taken up chatting about his time at the Blitz club and the development of early electronic music, using that music to illustrate his points as much as entertain. Imagine Ken Campbell doing a TED talk and you would be thinking along the right lines.

Egan returned to the stage after the interval, joining Midge Ure and his band Electronica for a run through of the Visage back catalogue. Despite a roster of personnel that included bits of Ultravox and most of Magazine, Visage seemed as much about style as content back in the day, and while this was fun, there frankly wasn’t a great deal of substance on offer. Mind of a Toy was a highlight, as was the one hit wonder of Zager and Evans’s 2525, but it took Fade to Grey to get the crowd on their feet and singing along. 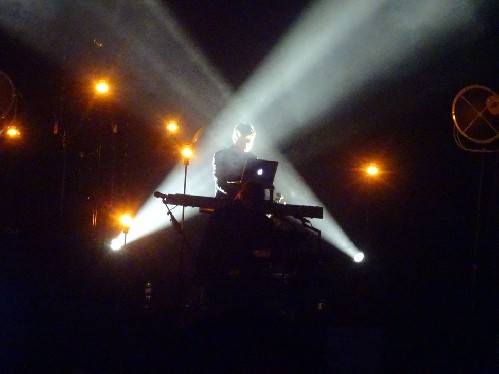 And so to the main event, as Astradyne sated a palpable sense of expectation. Opening an album with a seven minute instrumental might be considered audacious to the point of foolhardy but live it worked well – a welcome sorbet settling us into a formative LP that I suspect many present hadn’t listened to in years. This was also a fine showcase for the excellent backing musicians Ure had brought along, with Joseph O’Keefe’s violin the equal of Billie Currie’s. Thereafter, we worked our way chronologically, in some cases listening to songs that haven’t been played in decades. It’s a testament to the strength of the album that while only four tunes ended up as singles, you’d be hard pushed to pick out which ones they were from this showing. There were a few wobbles along the way – Ure seemed to struggle with Passing Strangers – but this is the first night of the tour and we should cut him a little slack. What intrigued me most was how much stronger some of the less well known songs came across.  Vienna was always going to be a highlight, but it’s now so achingly familiar that I frankly preferred the preceding Western Promise. I had always considered Mr X something of a stocking-filler on the album, but here it came alive - a bold nod to Kraftwerk that clearly signposted the band’s musical roots. 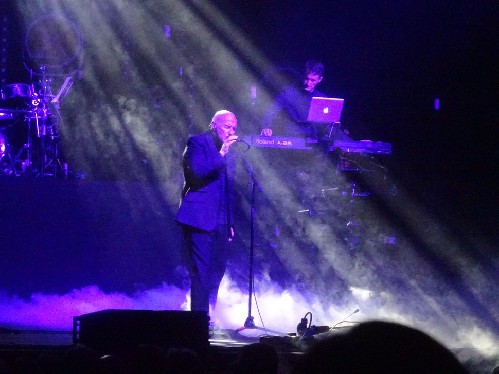 A jaunty All Stood Still rounded things off after all too brief a time ( I’d forgotten how much shorter albums were back then) so an extended encore was perhaps inevitable. Both Ure and the audience seemed more at ease with what followed – essentially all the missing bits of his standard set in what was inevitably an episodic evening but had been a fascinating retrospective. It’s hard to see how he could have done otherwise, but as a snooty muso that still thinks of Vienna as one of the later albums I’d have loved him to have pushed the boat out with his take on Hiroshima Mon Amour or Slow Motion, but I guess that’s a little too much to ask. Instead, Dancing with Tears in my Eyes, If I Was and Hymn, all played in quick succession, brought the evening to a euphoric end with the now standing, clapping, dancing crowd delighted to be able to sing along to something they knew all the words to. Who would begrudge them that?