It has been over thirty years since the release of ‘Vivid’, the genre-bending debut from Living Colour and the band have decided to go along with the current trend of performing albums in full to do exactly that tonight. This tour features a nice little classic rock package with Wayward Sons and Jared James Nichols opening proceedings. The tour takes in eight dates, fitting around performances at both Ramblin’ Man Fair and Steelhouse Festival.

Tonight’s date in Norwich is the first night of the tour and it’s over to Nichols and his band. Nichols is accompanied by drummer Dennis Holm and bassist Ronnie Elvis James, forming a powerful trio live. It’s Nichols himself of course that takes centre stage during a performance which includes blistering run-throughs of ‘Don’t Be Scared’, ‘Nails In My Coffin’ and ‘Mississippi Queen’. Nichols and co are in fierce form tonight and as they leave the stage I’m sure any in attendance previously unfamiliar with them will have found their favourite new act. 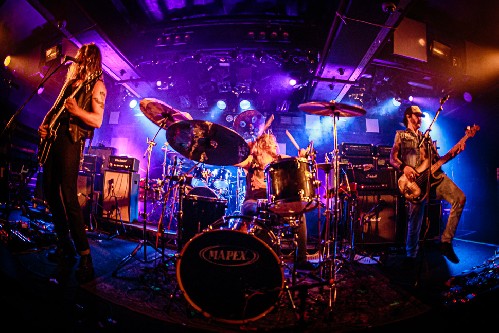 Next up is an act that as a band are still relatively new, but the same can’t be said of its members. I’ve seen the term “supergroup” used to prefix their name, but really what really warrants that term these days? I’m talking of course about the aforementioned Wayward Sons, less of a supergroup, more of a vehicle for frontman Toby Jepson. I think it would be easier at this point to list the bands that Jepson hasn’t either performed in or worked with as a producer, but as far as he colleagues tonight there are links to Chrome Molly, Quireboys, Spear of Destiny, Down and Outs, Treason Kings and Little Angels.

All seasoned performers then, fronted by a true journeyman to use a football term. There should be no surprise then that their performance tonight is solid if unspectacular and at times a little clichéd. In the context of tonight’s package however this is exactly what the audience wants. Wayward Sons also have some pretty decent tunes such as ‘Until The End’ which brings their set to a satisfying conclusion. 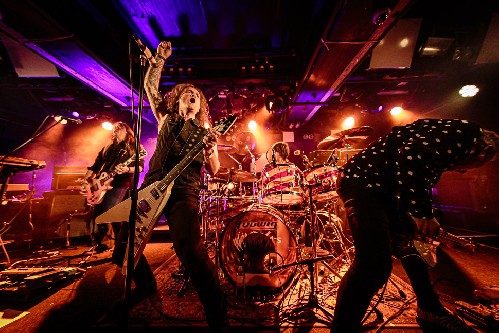 On to the main event of the evening and hailing from New York City, it’s two-time Grammy Award winners Living Colour! The band formed by guitarist Vernon Reid in the mid-eighties found instant success with their debut album ‘Vivid’ in 1988 and as already touched on tonight will see them perform that album in full. The band kicks off the show however with the excellent ‘Wall’ from 1993 effort ‘Stain’; a song never more relevant than now. Fellow ‘Stain’ track ‘Ignorance Is Bliss’ follows, before the band dip into their most recent release ‘Shade’ for ‘Who Shot Ya?’.

Singer Corey Glover now takes the time to properly introduce ‘Vivid’ and the band head straight into album opener ‘Cult Of Personality’. This of course is the track that won the band that first Grammy Award and the song that they are somewhat recognized for. As expected the track elicits delirious responses from the crowd and is undoubtedly the highlight of the night.

It would be unfair however to class the band as a one-hit wonder and ‘Vivid’ in particular still has plenty to offer. ‘I Want To Know’, ‘Middle Men’ and ‘Desperate People’ are all delivered with great energy by the band and the energy is reciprocated by the fans. ‘Open Letter (To A Landlord)’ then creates the sing-a-long moment of the evening with even Glover seemingly taken aback by the response. 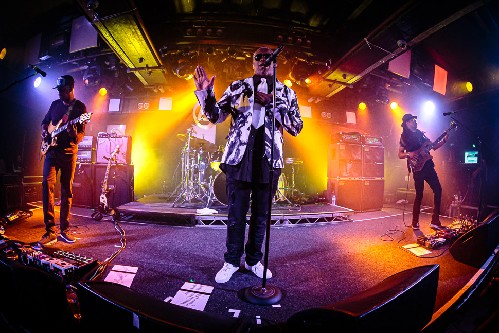 ‘Funny Vibes’ and ‘Memories Can’t Wait’ continue the show as I can’t help but admire the musicianship on offer from each individual member. Yes Glover is the vocal powerhouse and charismatic frontman and Reid is as hypnotic a guitarist as say Tom Morello. The band wouldn’t be the impressive unit they are however without the talents of Doug Wimbish on bass and Will Calhoun on drums.

‘Broken Hearts’ and the brilliant ‘Glamour Boys’ keep things moving along before ‘What’s Your Favourite Color?’ and ‘Which Way To America?’ conclude ‘Vivid’. Sometimes these album in full shows can lull when the hits are over and done with but tonight doesn’t feel like that, despite ‘Cult Of Personality’ opening the album! That therefore must say something for the quality and longevity of the record.

The timings tonight have all smacked of the first night of the tour effect and it’s at this point the band realise time has run out. With more left the play a brief band discussion concludes that it’s ‘Love Rears It’s Ugly Head’ that will end the evening. All in all it was a very good night of music from three bands who seemingly have plenty to offer in the future.