Following on from their recent, and ambitious, orchestral explorations, The Unthanks have moved on again, to perhaps the only place left to them – back to their roots, with a tour where they sing in unaccompanied harmony. It meant that only their support act was accompanied by instrument, this being an accordion, played with gusto and infectious good humour by Tim Dalling, who kicked off proceedings with his adaptation of Julia Darling’s poem ‘Two Lighthouses’. Julia is sadly no longer with us, the first of many departed souls that Dalling drew upon in his set. If that sounds maudlin, then nothing could be further from the truth. As each song was performed in his uniquely eccentric style, he ushered in the ghosts of Tom King, Michael Marra and Louis MacNeice, inviting them to join us in celebration of their lives and work. Throw in some nutty tap dancing, an invitation to buy his redundant CD collection and a friend’s mugs, and you have all the makings of a warm and hilarious start to the evening. Even when he spoke movingly of caring for his ailing mother, and there was a tangible shift in mood as we shared a moment of sombre reflection, it was swiftly undercut when he naughtily reminded us of the ‘Hairy Wee Hole’ from whence we all came.  Rounding things off with 'Absent Friends' proved two things – that he really can sing when he puts his mind to it, and that he really is a thoroughly affable bloke. 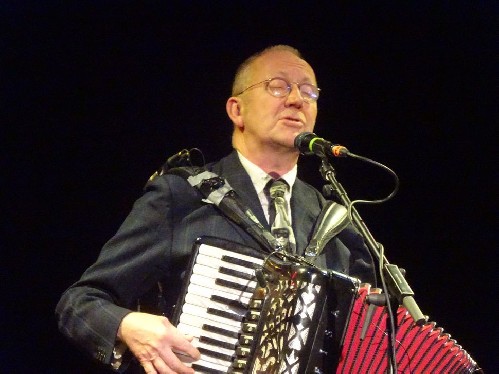 Dalling did such a good job of energising the room, it was a shame to see such a protracted delay fritter away the mood - it’s not as if there was anything to set up for the headline performance. After a forty minutes wait expectant chatter was beginning to change into grumpy impatience, though when Becky and Rachel finally appeared, all that quickly melted away with a haunting rendition of Johnny Handle’s 'Guard Your Man Well'. The Unthank sisters have been joined on this tour by Niopha Keegan, who has left her violin at home in order to show just how fine a voice she has - her lower register adding much the resonance of their harmonies. The evident bond between the three of them was hugely affecting but, blimey, they do like a natter. Along the way, Keegan revealed her dirty secret - that she doesn’t come from the north-east at all, her cockney twang betraying her estuary roots. 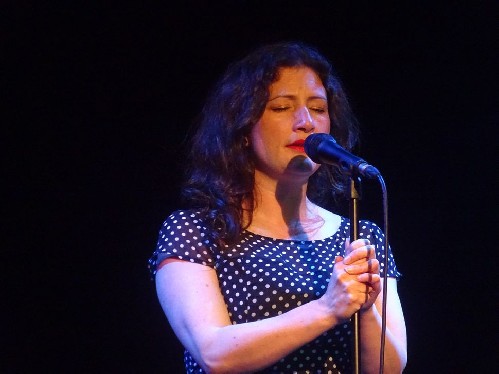 She jokily confessed that much of what the other two were saying amounted to little more than random vowel sounds, but they were sounds used to good effect, as the purity of the human voice was showcased in a variety of lullabies, with each of them taking a turn to sing the lead. More light relief followed with Kipling’s ‘Bee-boy song’, after which we got the altogether more substantial ‘Grisly Bride’, which Becky carried off to brilliantly spooky effect. My indifference to the ‘Sea Coal’ song may well have coloured my view of the ambitious sing along next attempted, but in the vast belly of the Open venue, a reticent audience contribution floated up and away to little effect. Consequently, when Rachel Unthank gave a solo performance of the ‘Sandgate Dangling Song’ it came as a welcome respite. They are all gifted singers, but singing solo, I think Rachel demonstrated she has the edge when it comes to distinctive, ear-catching character. That said, when the others returned for ‘Magpie’, last heard on the sublime Detectorists, it proved to be one of the evening’s highlights, after which things were rounded off with ‘We Picked Apples’ and ‘Bread and Roses’. 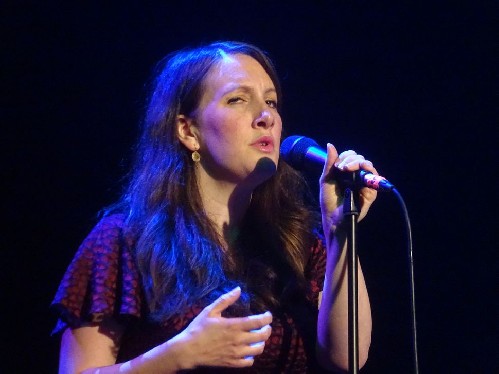 This was an audacious performance, unadorned and unaccompanied, and the chance for Unthank fans to see something very different. I did miss the light shade of instrumentation (and even the clog dancing). As if in acknowledgement of the need to ring the changes, Tim Dalling returned with them for the encore, taking the lead for the fabulously uplifting ‘Love like a river’. It was a marvellous sorbet after all that Unthank misery - there’s only so much a cappella that can be digested in one sitting – but lest we forget, as Becky impishly pointed out, is what the Unthanks are really all about, and it was followed by one more teaspoon of melancholy, with 'Under the Blackthorn Tree'. 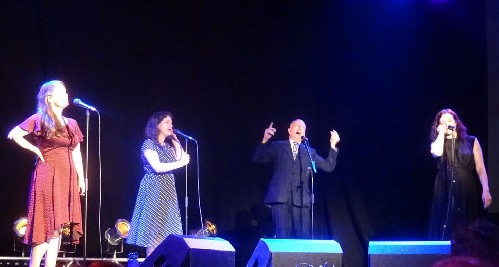 The Unthanks proper will be returning in the autumn, Rachel explained, though her wobbly knowledge of East Anglian geography led her to believe it would be closer that will be the case, and this was the first, and only, disappointment of the night. Nonetheless, as soon as I got home, I looked up where Saffron Walden was. Despite being two counties away, my immediate thought was – I can do that.