I first stumbled across the Idles last summer, playing mid-table on the second stage. Even then they seemed too big for the slot they’d been given. The crowd closest to the stage looked to be having a fine old time, but inevitably for a festival, they were surrounded by the casual and the curious, bothered and bewildered by the racket being imposed on one of the fluffiest festivals of the summer. The result was polite applause, rather than rapturous adulation, and I wondered just how different things would have been in front of a home crowd. As suspected, watching them play to those already converted was quite a different experience, but what I wasn’t prepared for was the utter pandemonium of an evening in their company – one that somehow managed to be energising and exhausting at the same time. 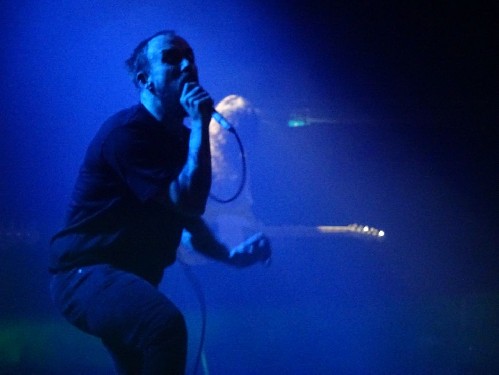 Before we got that far, however, we were treated to an outstanding support set from the Crows. It needed to be outstanding, as we’d been hanging around for an hour and there were murmurings of discontent all around, but I have to concede it was worth the wait. They’ve been plugging away for a few years now, and while I find it inexplicable they haven’t garnered greater success, all that gigging has certainly paid off for both their playing and showmanship. If I’d been told this was the headline band and all I was getting, I would have gone away happy. Admittedly the sound is a tad retro – if you are as well, then imagine Killing Joke fronted by Ian Curtis – but if you’re going to sound like someone else, I can think of no better influences. Their late arrival on stage did at least give the venue a chance to fill out nicely, so they got a proper audience for their all too brief set. By close of play, they even got the semblance of a mosh pit going, although it was nothing compared to the maelstrom engendered by the Idles.

Perhaps it was yet more waiting that led to such an animated crowd. Before the band came on, there was an atmosphere of feverish, febrile excitement that quickly morphed into mayhem once Joe Talbot and his crew appeared. Kicking off with Colossus, a song that gradually winds itself up, there was a palpable sense that the crowds were just itching to go nuts. By the time the band launched into Well Done nuts they had gone, pushing and jumping and swirling and pointing en masse in a way that I can’t recall seeing in decades. At times this became a disconcerting brueghelian horror show that threatened to compromise those of us more inclined to nod their heads in time to music. More often, though, it more akin to the mesmeric murmuration of starlings, as the assembled congregation moves telepathically as one. Every so often Talbot would halt proceedings, to ensure the latter and prevent the former.

“I’m a head nodder myself,” he insisted, “but have fun if you want to. Just don’t ruin the night for the person next to you.”

It was a typical comment from a man that, notwithstanding the splenetic rage of I’m Scum, Well Done and Mother, proved to be a gracious, considered and altogether lovely bloke – thanking the security, the venue, the Uni, the audience, and even delighting in Norwich itself. The perfect counterpoint to the urbane Talbot, was Mark Bowne, resplendent in his porn star moustache, boxer shorts and little else. He was never happier than when surfing the crowd before returning to base, shining and slippery with sweat. As Jon Beavis’s drums pushed the evening on, the set list flipped from the first album to the new one, Adam Devonshire stoic bass playing contrasting with the wild excesses of Lee Kiernan rhythm guitar. 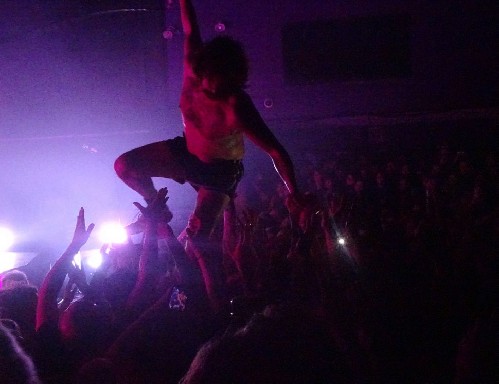 This was a show, performed by showmen, each song building on the last - the momentum pausing only briefly for a cheeky Maria Carey cover before the final assault on the senses. When Talbot walked off stage to the closing notes of Rottweiler, it was to an extraordinary cacophony of sound. One by one, the band members followed, waving their goodbyes as the audience waved back. An encore would have been insincere after that heartfelt goodbye, and thankfully it didn’t come. Nor was it asked for by a replete audience that realised there was nothing left for the band to give.

To ask if the Idles can really be that good – which they are – rather misses the point. You might as well ask if a thunderstorm or a tornado or a tsunami is any good. Better to see them as a spectacular and undeniable force of nature, the like of which I’ve not seen in a very long time. I don’t think it’s going too far to suggest they are the voice of a lost generation – I wonder what that voice might go on to say.