Why bands of the late seventies should have been blessed with such longevity it’s hard to fathom, but while waiting around at the Norwich night of Killing Joke’s 40th year anniversary tour, I find myself pondering over the maths of such an event. Can it really be forty years since they first made a record? It may not be quite that long ago I first saw them but it’s longer than I care to admit to, and unnervingly it was at UEA, very probably standing in the exact same spot. Jaz Colman radiated an almost demonic presence back then, and the gig remains one of the most memorable and disturbing I’ve ever been to. I wonder if he is as surprised to still be playing, as I am to still be watching.

Before the happy reunion, however, a brief dalliance with post-millennial music is in order, as the marvellously named Turbowolf takes to the stage. Frontman Chris Georgiadis gently coaxes an audience that have come to see someone else, with a disarming charm and a quiet courtesy completely at odds with the wall of sound that follows. This is a band that has found the twelfth notch on their amplifiers, offering up a blistering assault on the earholes. Looking like the bastard child of Frank Zappa and Mackenzie Crook, Georgiadis bounds about the stage, bravely attempting to whip up enthusiasm, seemingly undaunted by a guarded response from a punkish crowd unused to pavlovian overhead handclapping.

Without Lianna Lee Davies’s bass guitar – I’m told she is having a baby – their sound has a lean White Stripes flavour – notwithstanding all the whizzy synthesised noises. Georgiadis sings in a register that lies somewhere between Rob Halford and Dick Valentine, which is apt for a sound that bounces around between psychedelia, heavy metal, dance and 80’s electronica. For the uninitiated, which would be me, much of the set is no more than a pleasing smorgasbord of influences and sounds, with the Ramones, Electric 6, and King Gizzard & the Lizard Wizard all popping into my head at one time or another. Individual tunes did stick out, though, with Solid Gold, Domino and Rabbit's Foot being particularly strong. Most memorable of all, however, was the showmanship. Andy Ghosh’s guitar wouldn’t have been nearly as effective without his insouciant attitude, while Blake Davies’s furious drums brought to mind the late, great, Philthy Animal Taylor. Both were distracting in the best possible way, but only momentarily from the centre of attention - the flamboyant, good humoured and extraordinarily energetic Georgiadis, who at the end of their set won, from an initially diffident audience, enthusiastic applause. 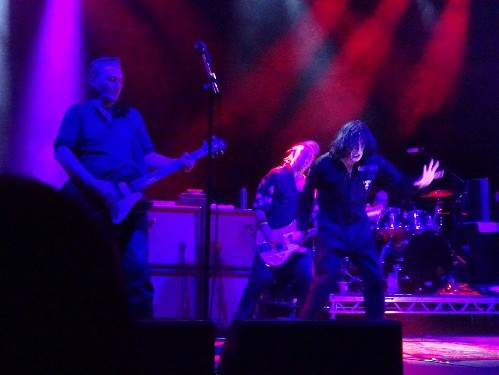 Killing Joke kick start their set with an Unspeakable opening number (see what I did there?) for the benefit of us oldies, followed by the far more recent European Super State, and the practically new Autonomous Zone. It was a template for the whole evening, with due regard for the unimpeachable classics of yesteryear, without dwelling on past glories. Eighties was at the time of writing a paean to modernity. Now it takes on entirely different, almost elegiac quality. To the ears of a generation then unborn, I’m thinking it must sound like an olde English folk tune, but its delivery is unapologetically robust.

No less robust is the response from the audience. Far from dancing around their Zimmer frames, the cross-generational crowd moshed with increasingly ferocity and vigour. It’s all good natured stuff, though – when a gentleman of mature years trips up and falls to the floor, the people around him freeze like a game of musical statues until countless hands help him up. The secret has long been out that the more raucous and uncompromising the music the friendlier the crowd, and this jolly mix of punks, metal-heads and space-rockers were no exception. 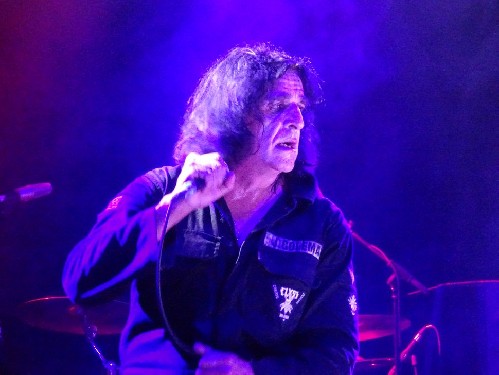 We’re now rattling through the numbers, with the evening flying by, as the haunting Requiem and the tribal rhythms of Follow the Leader, mix with the recent Corporate Elect and the noughties’s Asteroid. Throughout, Jaz Colman is still a commanding presence, resplendent in his boiler suit - wild eyed and lank haired, he looks like a poster boy for German Expressionism (google The Cabinet of Dr Caligari and you’ll get the idea). He may not be quite as terrifying as he used to be, but he still doesn’t look like someone you’d invite round your Mum’s for tea. It’s all in the performance, of course, and in-between songs he is revealed to be a thoughtful and grounded fellow, anxious to share his politically charged world view with likeminded people.

It’s not all Colman though. It was around 2008 that the classic line-up reunited, and the impact of that is manifest. As the evening draws to a close with Pssyche, the undiminished Youth is still regaling middle-class Nazis with spittle flecked fury. Geordie Walker’s insistently wailing guitar rings out like a hornet’s nest, while Paul Ferguson simply bashes the hell out of his drums. As they conclude with an encore of Love Like Blood, Wardance and Pandemonium, I am reminded of just how many brilliant songs Killing Joke have in their armoury – and how brilliant it is to see them playing them on  top form.