Rock and Roll should be fun but often, it isn't. Well, don't fear, Elvana are here. The Elvis fronted tribute to Nirvana. Playing the smaller of the venues inside the O2 Academy, Elvana are playing to a packed out room of around 600 people. Judging from the t-shirts on display, everyone is a Nirvana fan. This should be interesting.

Having missed the opening number due to parking issues, the show is in full swing as I enter the room. The room is filled to capacity and it seems everyone in Sheffield is over 6ft tall. I'm greeted to the welcome sound of 'Serve The Servants'. The drums are fast and powerful, the guitar screechy and dirty. The bass booms out and is instantly reminiscent of Krist Novoselic. This band can play grunge. "Elvis" is up on stage, larger than life in a red jumpsuit and sunglasses. Everyone in the room is smiling. So far, this is great. 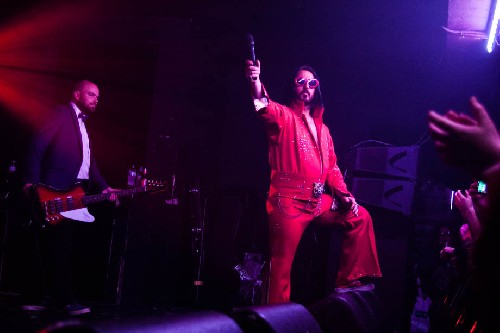 After the song finishes Elvis appeals to the Elvana virgins in the audience of which I am one, to make some noise. I squeal excitedly as I make a mental note to catch this show whenever I can in the future. One song in and I'm totally sold. Elvis certainly knows how to work the crowd and they (we) love him. The opening riff to 'School' begins. I am compelled to jump up and down. Elvis sometimes sounds like Elvis, he sometimes sounds like Kurt Cobain. Often he sounds like an English man. None of it matters. The whole concept works magnificently. Quite a faithful version of 'Love Buzz' follows with Elvis continually working the crowd and offering us all the mic on the shouty bits.

'Breed' follows and eventually turns into 'Viva Las Vegas'. The transition is kind of seamless and quite clever. If I say these guys don't take themselves too seriously, don't mistake that to mean that they are not highly talented performers with a top notch act to boot. During 'Drain You', Elvis instructs the audience to get low and surprisingly, we all do, springing to our feet as the song erupts again. I'm having lots and lots of fun. The highlight of the show for me was 'Rape Me' into 'Love Me Tender'. Can't help but think that Mr Cobain would've loved the juxtaposition of these two numbers. Brilliant. 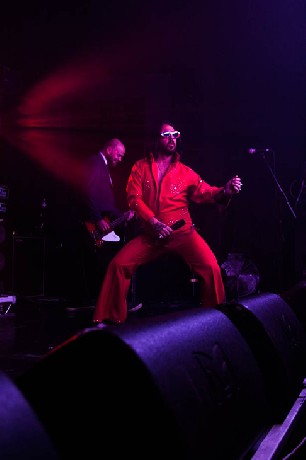 Having both the back catalogues of Elvis and Nirvana to draw from, keeps me guessing as to what could possibly come next. We are treated to 'Aneurysm', 'Heartbreak Hotel', 'In Bloom' and 'Dumb'. We are informed by Elvis that Bass Guy (Novoselic) hates being centre stage as the band forces him into a bass solo. There's a great comedy element to this band that is as slick as the tunes and the audience seems to love it. After 'Territorial Pissings' and 'Suspicious Minds' the set closes out. Obviously, there will be an encore.

The band return minus Elvis and perform 'Molly's Lips' (Vaselines) Nirvana style, giving Elvis time for a costume change. He reappears in a white, Vegas era onesie. 'Can't Help Falling In Love' has us all swaying; it's lovely. 'Heart Shaped Box' reminds me again just how good Nirvana were. Elvana can really play and despite the comedy element, there's always an underlying respect for the songs. We all sing 'Smells Like Teen Spirit' and 'Come As You are' to round off the evening. There's a really good vibe in the room.

What a show. Elvana are well worth a watch and I would recommend them to fans of either Elvis or Nirvana. It's obvious how much work has gone into this tribute and Elvis has the charisma and crowd working skills to pull this off. If these guys come to your town, do yourself a favour and go see them. A really, really good night out. 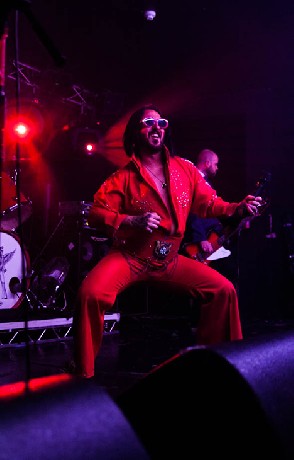