We in the UK often like to think we have the monopoly on eccentricity – perhaps considering it one of our defining traits. It is, therefore, quite a shock to be confronted, indeed outgunned, by two different shades of bonkers offered up on a double bill of lunacy from across the Atlantic. At the Norwich Arts Centre, Thomas Truax and Bob Log III ably demonstrated that there’s more than one way to carve out a unique niche for yourself within our increasingly homogenised music industry. 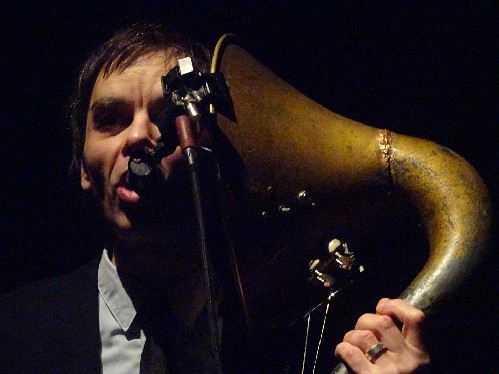 First up was the inestimable Thomas Truax, straight in with a blast on the Hornicator, one of a number of self-made instruments that were both bizarre and beautiful. It’s not immediately obvious how the Hornicator works, though it appears to be a horn off an old record player, with added strings and microphone. While drumming out a rhythm of the horn’s outer rim, Truax bellowed into the horn while plucking on the strings. The effect was far more musical than it had any right to be, as was the Sister Spinster, a system of spinning wheels with paddles attached, that beat out the rhythm while he played guitar.

There was something other worldly about Truax from the outset – beguiling so, as he explained how he came from Wowtown, an independent entity that had levitated up out of the US and was now floating in the ocean. This city state was introduced to us through “Granny Says”, an elegiac and teasingly understated track off his new album. Sadly we didn’t here nearly enough of this latest offering, with “Save Me” (a song dripping in melancholy and so sweet it was unsettling) the only other tune from “All that Heaven Allows”. It was a glimpse of his genuine song writing talent, as was "The Butterfly & The Entomologist", a set highlight in which he played his guitar with a pocket fan to memorably eerie effect. 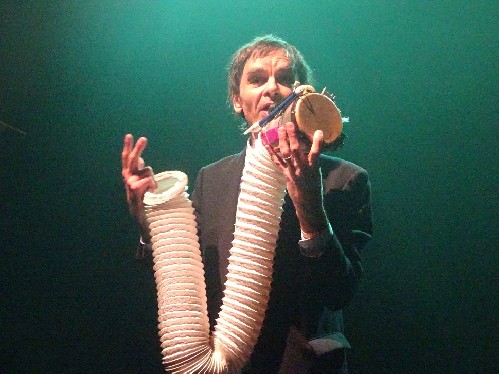 One has to wonder if Truax worries about being taking too seriously. Having seduced his audience with too few of his haunting tunes, he was off again, unmiked and so unheard, wandering around the audience and then out by the cloakroom, before reappearing through the fire exit, which was then quickly followed by a number on something called a Stringaling (what looked like the tube off a tumble driver attached to a drum). All great fun, but in a set that was far too short to properly showcase his talents, I’d have preferred more music and less distraction. Truax is a fabulous showman, but he’s also a songwriter of wit and substance – he just has to realise that for himself.

Speaking of fabulous showmen, Bob Log III proved to be a commanding, if disconcerting, stage presence. Dressed in a gold Lamé one piece, his face obscured by a crash helmet, he addressed his audience only through a telephone receiver embedded in the visor of his headgear, while sitting splayed legged on a drumming stool, plucking away on his old Silvertone guitar. With his prop heavy routines, and his self-deprecating humour, the nearest British equivalent would be a John Otway concert, which is still, frankly, not very near at all. There was crowd participation aplenty, with gender neutral lap sitting, balloons to inflate and burst, and Prosecco drunk from a dog bowl. Most memorably, Log brought health and safety to the heady world of crowd surfing, as he crossed a sea of supportive hands from the relatively security of a rubber dingy. 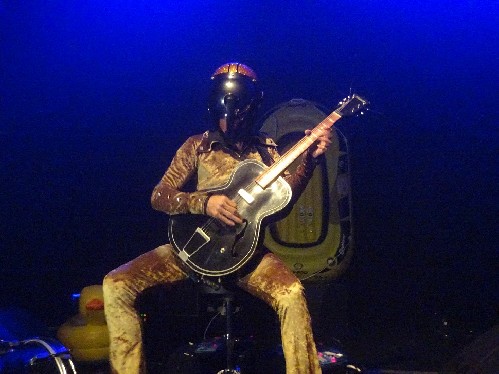 The added twist is that (with no intended disrespect to Mr Otway) Bob Log is an astonishing musician, with an almost fiendish talent for high speed finger-picking slide guitar. At one stage Mr Log explained the three simple steps to take, if you wished to ape his undoubted virtuosity. Anyone, he suggested, could be as good a guitar player as he if they, firstly, got a guitar, secondly sat on a stool, and thirdly, stayed there for the next twenty two years. The product of those twenty two years, combined with a kick-drum and a homemade foot cymbal, produced a very particular sound and one which was adeptly produced.

Such is his good humour, it feels almost ungracious to point out (whisper it) that one number sounded largely indistinct from another, something that not even a large inflatable duck could save from an uneasy feeling of repetition. Perhaps it was just me, though – I would have to concede that I cannot recall the Arts Centre being as lively. While the narrow furrow he ploughs went on (and on and on) just a little too much for me, it would be hard to argue with the notion that to his disciples a night with Bob Log is the party night of the year.