Tickets for the Levellers gig at Nottingham’s Rock City had sold out many months ago, so it was with an air of excitement that eGigs trundled up north to see what the fuss was all about.

The Levellers seem to have been one of those bands that have been around for donkey’s years (28 years to be exact) but never really managed to dominate the mainstream music scene. Now it would be easy to assume that it could be that they just simply aren’t talented enough to have made it to the big time. Purely on paper you would be forgiven for jumping to that conclusion. The facts in pure black and white are: 28 years together, only one number one album back over 20 years ago, (Zeitgeist). By all accounts if they were an X factor act then they would have been dropped and slipped into obscurity decades ago.

When the Levellers announced that they were doing this tour to celebrate the 25th anniversary of their second album 'Levelling the Land', it was easy to think that this is a band trying to hang on to their former glory days.  Thankfully nothing could have been further from the truth.

The night's proceedings were kick started with a singer songwriter called Gaz Brookfield, an amusing witty song writer, who has an incredible talent for writing acoustic melodies. 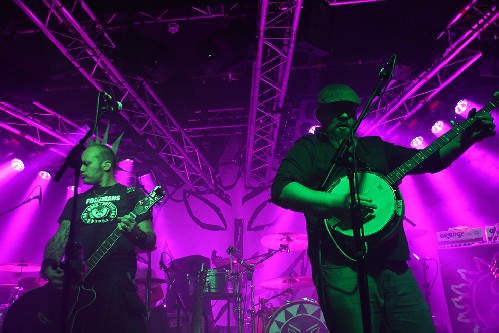 Next up was a Nottinghamshire based band called Ferocious Dog, over the last couple of years Ferocious Dog have worked hard at building up their loyal fan base and sure enough their own fans had turned up at the Levellers gig and were vocal throughout the bands set. Ferocious Dog are a six-piece band that have a folk based sound sprinkled with a delectable infusion of reggae and rock as well as Celtic vibrations.

Ferocious Dog opened their set with a song called 'Gallows Justice', the frenzied crowd were then pulverised with well written Celtic folk punk songs for the next hour, songs such as 'Hell Hounds' and 'Slow Motion Suicide' left the audience under no doubt that they may just have witnessed a band that has the talent and passion to go on to dominate the folk music scene.

The stage was then prepared for the imminent arrival of the Levellers, the set started with video footage of various protests and demonstrations throughout the decades. Then the band walked onto the stage to a volcanic roar of approval from the crowd. and sure enough the Levellers as expected played the album 'Levelling the Land' in its entirety. Hearing songs such as set opener 'One Way' and 'The Boatman' made this gig nostalgic for a lot of fans, as I scanned the packed-out venue, it was rammed full of people of a mature age who have grown up with the Levellers throughout the decades. However, it also brought back memories of some of the glory days of the Levellers such as their performance at Glastonbury when they managed to get a huge turnout at their pyramid stage debut back in the mid 90’s. 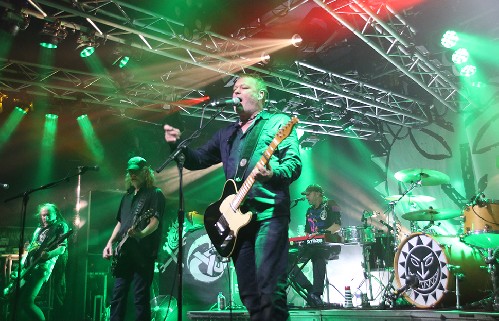 Levellers are one of the few live bands that allow their music do the talking for them. They don’t rely on silly gimmicks to keep the fans entertained. From the first track 'One Way' to the dying notes of their final song of the evening 'What You Know' it was an all-out attack on the senses with brilliant laser type lighting to enhance their music, and to showcase some of the different sounds they have had throughout their 28-year career.

Unlike most bands that tour, Levellers have that ability to make their gigs feel like an event rather than just another gig.  Lead vocalist Mark Chadwick and the rest of the band members give the impression that they are genuinely happy to be up on stage playing for their fans, and they deliver each song with such energy and passion that you would not believe they have been performing these songs for 25 years.

There is no denying that the Levellers have talent in bucket loads and can write some of the most melodic folk songs ever recorded. When it comes to playing live, a Levellers gig is a masterclass in live performance.