Reputations are a funny old thing. How they come about varies and the validity of such reputations is sometimes dubious. Dave Grohl has a reputation for being a nice guy (and I'm sure he is), but unless you get to know him personally then how do you know. Many rock stars have reputations for being wild party animals, but unless you personally experience it, how do you know that it's true. There are numerous musicians with a reputation for being awkward and bad to interview, but then you meet them and they are genuine down to earth nice guys and the reputation just stems from one interview that caught them on a bad day.

What I'm trying to establish is that you can never really know whether a reputation is deserved or not. This brings me to tonight and a sojourn to Norwich's Nick Rayns LCR for a visit from Welsh metal heroes Skindred, a band who you guessed it has a reputation. Their reputation is that of a fantastic live act. Now I've caught these guys four times before and here's the thing – I've always been left underwhelmed. So is this reputation deserved? Having only seem them at festivals and in support slots I thought it only fair to catch a headline show and find out. 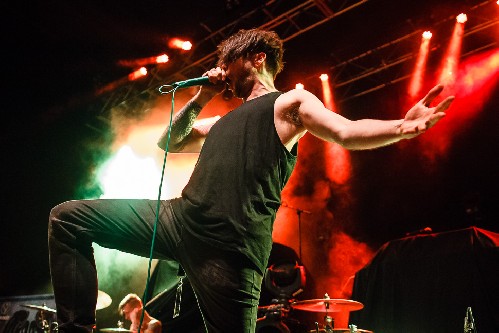 The bill tonight features four bands and it's a band that has been around since 2006 that kick things off in the shape of Yashin. Now their performance tonight is ok and they do get the crowd moving with one of their singers spending a lot of time in the audience. This is a band though that has been around ten years and is still only opening. They, on their own admission, have just spent two years recording their new album but in reality I can't imagine that there are many people waiting to hear it. 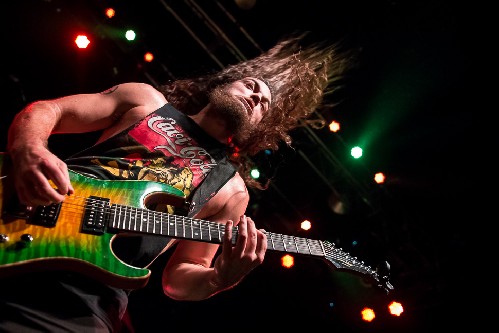 On a somewhat varied bill it's 90's "G-punk" band (hed) p.e. up next. People unaware of the band seem surprised when the four roadies that have been on stage for ten minutes start playing a song. They soon cotton on to the fact that they are not roadies and that they're the next band. It's an unusual beginning which gives the performance a slow start. In fact it's only towards the end that it really kicks into gear. By the end the band and crowd are fully into the experience but then as slowly as it started it comes to an abrupt end. 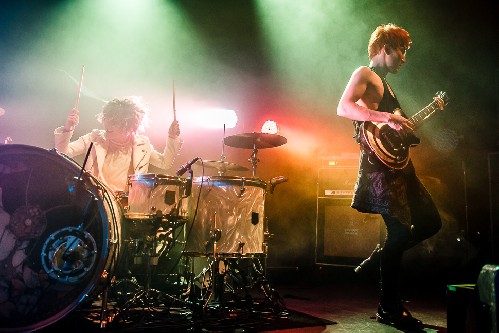 Our final and main support act of the evening is another band with a reputation as a standout live act, and one that I've verified live myself on three previous occasions. This band is Japan's Crossfaith who's mix of metalcore and electronic dance has the venue rocking instantly. The likes of 'Monolith' and 'Countdown To Hell' see bodies flying, circle pits erupting and even a good old fashioned wall of death. It would appear that there are a lot of people here tonight just for Crossfaith.

Skindred's Benji Webbe joins them for a run through of collaboration 'Wildfire' before their enormous cover of The Prodigy's 'Omen' leaves a mangled pile of sweaty bodies to recoup in time for our headliner. Crossfaith always seem to deliver and surely a headline tour is long overdue. It's at this point I really wonder whether Skindred can top this.

They are certainly brave, as is anyone who is willing to have Crossfaith support, as they risk shooting themselves in the foot. With the bar set high Skindred take to the stage with an impressive looking giant backdrop giving the impression of a wall of amps. 'Under Attack' provides a good start and I hope that this is the time for Skindred to backup that reputation in my eyes.

But as things progress I start to lose interest. Perhaps it's the music that I can't get into because Webbe demonstrates he is as charismatic frontman as there is. He conducts the audience like a choirmaster conducts a choir and his impassioned speeches can stir even the most laid back amongst us. But for the middle portion of the set they struggle to hold my attention. 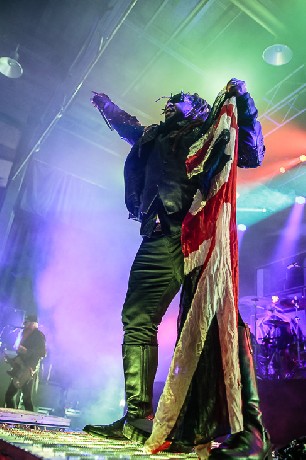 Towards the end however things do pick back up as the band tear through 'Pressure', 'Kill The Power' and 'Nobody'. As a whole, the set list tonight is a mix of their albums but with just three from their latest release 'Volume', an album that Webbe thanks the fans for getting to number twelve in the Album Charts.

For the encore the band play 'Playing With The Devil' and 'Warning' with both Koie Kenta (Crossfaith) and Jahred Gomes ((hed) p.e.) joining in. It provides an explosive finish to a very stop-start evening of heavy metal and leaves my question on the deservedness of Skindred's reputation still up in the air. If I had to mark their set then I'd say average with potential for better.

Perhaps a greater familiarity with their body of work would help and I'm willing to try again but for now their reputation remains unfulfilled in my eyes. Crossfaith's however only continues to grow. Which does beg the question if Crossfaith hadn't stole the show, would I have felt differently about Skindred?