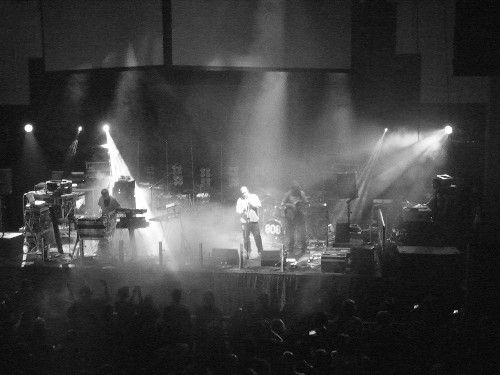 Tonight 808 State opened with a throw away line to the already throbbing Troxy crowd… "in case you don’t know who we are, we’re 808 State" then took the motley crew that enjoyed their sound on a deep dive into dance classics the crowd all knew, beginning with the ultimate, 'Pacific State'.

Then, staying true to his polymorphic and anti-formulaic form, composer & producer Squarepusher (AKA Tom Jenkinson) played two sets in one night, and with them, played his wild card. 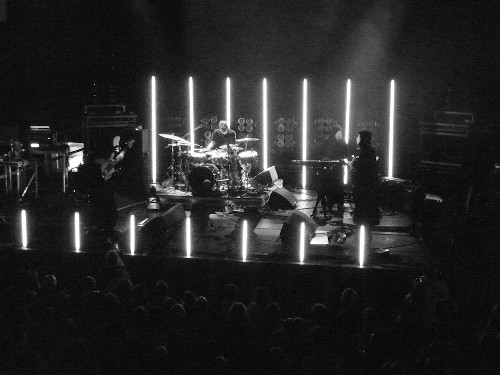 A prolific tweaker, conceptually driving his textural sounds into unrepentant and maniacal new forms, this gig saw him push the realm of masked muso into two polar realms. First in prog-esque-quartet Shobaleader One. Dressed in black robes, white netting obscuring their faces the four figures played inwards, towards each other and walled in by a minimal cage-like forest of tubular lights. The super flash set no less gave a nod to Beckettesque minimalism, where the super loud and drenched sounds spoke of 70’s porn sound tracks and italo prog rock, deteriorating beyond the facade of structural harmonies into purely jazz inspired über decorative jamming … Jenkinson worked his base heavy, repellently and intricately, pushing, pulsating and with every new moment building up layers of abstraction: there is dense, super dense, and then there is Squarepusher dense.

Rejoining the stage for the headline solo electronic set, this time as a masked fencer, who’s scenography changed into four staked screens, Squarepusher took his sounds to another level.  Set before this chevroning tower, that acted as a backdrop for dystopic code projection, blips, sequences and patches, speeding along as a visual code to his thrashing set, Squarepusher ripped out a stream of D&B chaos that brought joy to the masses that wanted the masked piper to lead them into the realms of a hard-core head-fuck dance party.

Squarepusher’s sonic city is a dark, scary, fun place we all inhabited just for tonight. 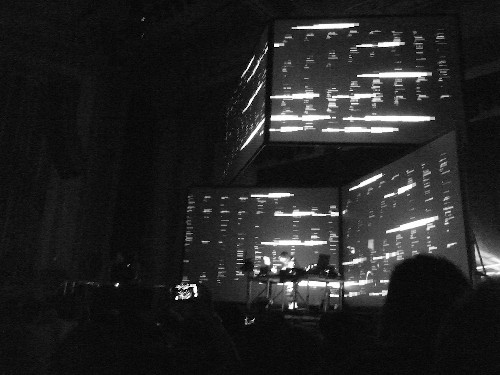