The evenings are drawing in, there are leaves on the ground and there's a chill in the air. Autumn has reared its ugly head and that means festival season is over for another year. It's therefore about to get really busy for live music fans. No, I'm not talking about Christmas shopping! It's time for music fans to head inside to the nations beloved network of venues for the crazy gig calendar that is this autumn period.

For me The Waterfront Studio in Norwich seemed as good a place to start as any, especially when there was a good time guaranteed band such as The Graveltones in town. Jimmy O and Mikey Sorbello burst onto the scene in 2013 with their foot stomping debut 'Don't Wait Down'. This year they have followed it up with more of the same with the release of 'Love Lies Dying'. With a new album inevitably comes a tour and this is a band who are no stranger to the road, this show sitting halfway through a lengthy trek around the country.

Up first was local singer George Cheetham. I must say I feel sorry for Cheetham who states he only found out he was playing a couple of hours prior when the venue asked him to play. A mellow acoustic guitar wielding songwriter opening for a heavy and raw rock outfit isn't exactly a match made in heaven. Cheetham does his best to showcase his talents, of which he has plenty, however in front of a biased rock crown he fails to hold their attention. I especially feel bad for him when Jimmy O thanks "Graham" for opening the show. 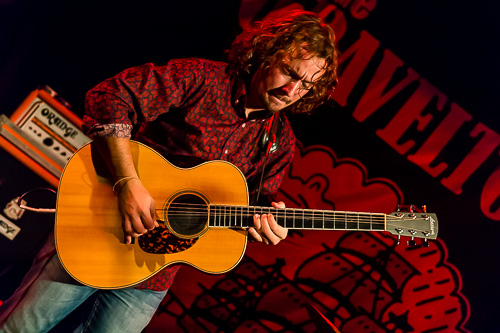 Given the reaction to a singer-songwriter opening the show I was surprised when another gentleman took to the stage holding just an acoustic guitar. I feared for this next chap; that was until he started to play. Far removed from the traditional solo acoustic troubadour Freddie Webber produces a sound as similar to The Graveltones gruff and ruthless blues as it is possible to produce through just an acoustic guitar.

Webber had been main support throughout the tour and knew the crowd he was playing to. He was able to do what Cheetham could not and grab the crowd's attention. Far more than that he was able to thoroughly entertain them and come the end he is able to leave the crowd literally asking for more, and that's all a support act can ever hope for. 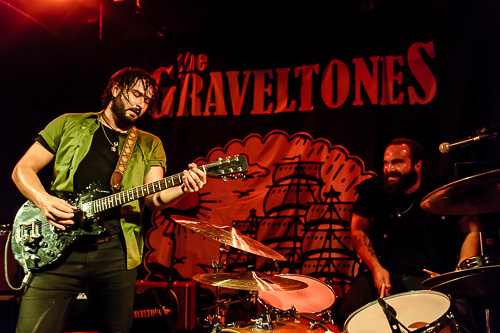 It had been just over a year since The Graveltones last graced this very stage whilst promoting their glorious debut 'Don't Wait Down'. They are back again tonight and so are their fans that filled the venue knowing they were in for a rocking good time. 'Love Lies Dying' follows on where their debut left off and provides some fresh music for a set list that bounced between the two albums.

The Graveltones are an old school type of band based on blood, sweat, tears and above all else hard work. Their work ethic is especially noticed when examining the length of their shows. Whilst most bands with two albums and sadly too many with even more would call it a day at the hour mark, The Graveltones are happy to push on closer to the two hour mark. It's not just the length but the effort the band exerts with little to no rest, they simply power through.

Whilst on the subject of power, it's Sorbello's power that drives this band forward and it's truly a privilege to watch such a juggernaut perform live. Combining his thunderous drums with O's raw gravelly (pun intended) guitar sound is the perfect grouping and is the foundation of what The Graveltones do. Jimmy O is also a powerful vocalist as he demonstrated on '(I'll Be Glad When You're Dead) You Rascal You'.

The likes of 'World On A String', 'Fancy Things' and 'This Love's Gonna Break' from 'Love Lies Dying' sit perfectly amongst fan favourites such as 'Forget About The Trouble', 'Catch Me On The Fly' and set closer 'Bang Bang'. With 'Love Lies Dying', The Graveltones have continued to do things their way and with more brilliant results. The future is bright for this band. 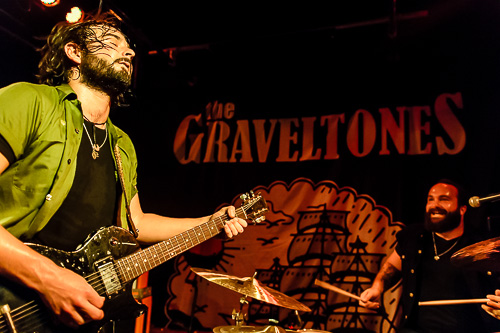