The dust has only just settled after NOFX and Lagwagon have left the building, and one time fellow Fat Wreck label mates Snuff are here to play their Cockney infused straight up punk rock. It's no shit funny as Oi! punk from the band that first formed in 1986 and drummer Duncan Redmonds is still singing and playing drums, a feat not many can pull off, especially with the speed of punk. Guitarist Loz Wong, Bassist Lee Batsford, Trombonist Oliver Stewart and keyboardist and guitarist Lee Murphy now make up the band, who have gone through a few line up changes but still continue to produce sterling punk rock. 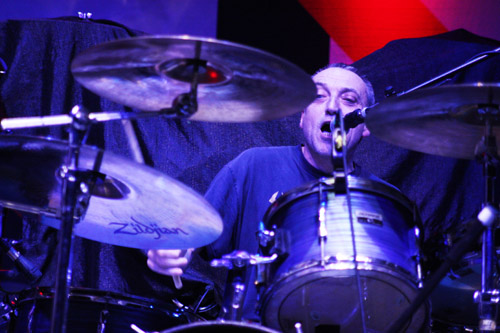 You know what you get with Snuff, which is the way I for one like it. 'Whatever Happened To The Likely Lads' and the wondrous crescendo of expletives that is 'Arsehole' (though mild by today's standards… "Toss pot. Toe Rag!") are set regulars. Nowt like shouting "You're an arsehole!" with a few hundred other folks. And the room is pretty damn full for Snuff as a support act, not your usual 50 people milling about. The rest of their set comprises of songs across their band span, like 'Too Late' from 'Snuff Said', 'Batten Down The Hatches', 'G to D', 'Sunny Places' and one of my favourites 'Nick Northern' from 1996's 'Demmamussabebonk', 'Whatever Happened To The Likely Lads' from 'Potatoes and Melons Wholesale Prices Straight from the Lock Up', 'Ticket' and 'Brickwall' from 'Tweet Tweet My Lovely', 'Marbles' from 'Numb Nuts', plus 'Mumbo Jumbo', 'Half Tidy', 'In The Stocks', 'Know What You Want' plus the rousing cricket TV theme cover 'Soul Limbo'. They play next February at the Key Club so be sure to catch them there! 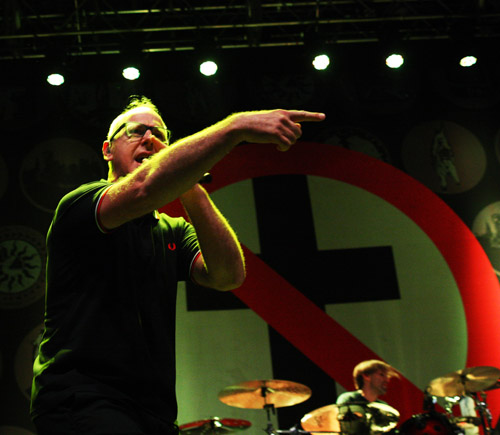 Bad Religion need no introduction if you know your punk. Formed in 1980, the band do sing about religious and political matters, and what we as listeners can accept as our responsibilities. The added simple guitar melodies, rousing solos and building vocal harmonies in 3 parts are signature Bad Religion sounds, and they are heralded as influences for many punk bands today, and help other bands through their guitarist Brett Gurewitz's well-known label Epitaph Records (Rancid, Alkaline Trio, Frank Turner, Millencolin and many more are or have been on this awesome label).

They rarely play Leeds, and say their Manchester show yesterday was merely a warm up for tonight. With 32 songs in a set lasting around 90 minutes is amazing that they still have time to chat with the crowd, but singer Greg Graffin and bassist Jay Bentley still find the time to take the mick out of a guy sat outside the venue room watching from a settee, and the fact that many folks down the front look too young to remember some of these songs the first time, as Graffin jokes he needs a teleprompter (autocue to us Brits) like Ozzy has to remind him of the lyrics! The band are having a ball, as are the mixed age crowd. The band themselves bounce about like a band half their age, and show no sign of letting up. Their lyrics are still very poignant, subject matter still relevant and delivery still as sharp as ever. Greed, jocks, family acceptance, environment, anti-conformity, politics and all the social failings are brought to the forefront of your attention by Bad Religion, bit in such a way that it is catchy as fuck, with upbeat and positive melodies. Gurewitz and Graffin have been called the Lennon and McCartney of punk rock for good reason…

The setlist is huge, though pretty standard for a punk band with 16 albums! 'How Could Hell Be Any Worse', 'Suffer', 'Against The Grain', 'Recipe For Hate', 'Stranger Than Fiction', 'The Empire Strikes First', 'New Maps Of Hell' and 'True North' are all represented, with 'Stranger Than Fiction', 'Fuck You', '21st Century (Digital Boy)' and 'American Jesus' to mention a few as highlights. There's no 'Punk Rock Song' or 'Los Angeles Is Burning' which is a shame but look at the rest of the songs here! Well worth the quite low (by today's standards ticket price) of £22, plus their merch prices are low too. You want a fulfilling and value punk gig, catch these quick, as they mentioned they do not tour up this way very often. 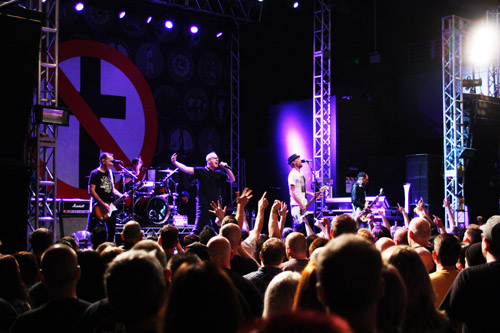 Kyoto Now!
Anesthesia
Stranger Than Fiction
Recipe for Hate
Fuck You
Dharma and the Bomb
Skyscraper
I Want to Conquer the World
21st Century (Digital Boy)
You Are (The Government)
1000 More Fools
How Much Is Enough?
Suffer
Delirium of Disorder
Do What You Want
Wrong Way Kids
Broken
Come Join Us
Dearly Beloved
Billy
You
No Direction
Dept. of False Hope
Overture
Sinister Rouge
Let Them Eat War
Sorrow
Infected
Generator
American Jesus

Fuck Armageddon... This Is Hell
Fields of Mars