They say that "politeness doesn't cost anything", now hold that thought and I'll come back to it. Tonight Norwich's Waterfront Studio plays host to alt rockers InMe who shot to fame in the early 2000's with stunning albums 'Overgrown Eden' and 'White Butterfly'. Fifteen years later and the band is still going strong and have just released 'Trilogy: Dawn' the first of an ambitious trilogy of albums. They are also back on the road and have brought Ashes and The Dirty Youth along for the ride. 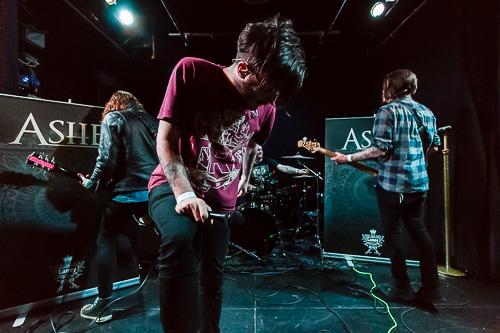 First up are Manchester's Ashes who take to the stage to the small gathering of early attendees, most of whom are still congregated at the bar. The four-piece hit their stride early and blast through their short set at some pace. Musically it's not exactly groundbreaking stuff but not as bad as the crowd's reaction would have you believe. The issue tonight comes in the band's singer constantly lambasting the audience for their lack of participation through the medium of swearing and insults.

Whilst that technique might well have had the reaction they were after from a large crowd it wasn't really going to work in front of the thirty or so people in the venue at this point. The perceived hostility instead had the opposite affect and took away from what wasn't an awful performance. Ashes are a band seemingly gaining momentum following a number of support slots and hopefully they can build on their promise.

Building on promise is something which tonight's main support act have also had to do and I'll get back to that in a moment. First however I'd like to return to my opening remarks regarding politeness. The crowd has now gained some additional members however these have joined the throng around the bar and as The Dirty Youth complete their opening number this is still the case. At this time vocalist Danni Monroe asks the audience to "please move forward" and in unison the entire audience immediately moves to the front of stage. An amusing sight and one which goes to show that politeness doesn't cost a thing! 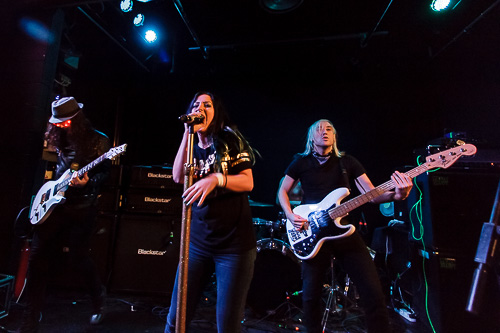 Now then on to the music and I reviewed The Dirty Youth back in March 2014 when they opened for Heaven's Basement. I commented that "There is certainly potential in these five youngsters but more work is needed if they are to achieve any level of success." Regarding Monroe I stated that, "For most female fronted rock bands the vocalist is the centrepiece, but tonight it was the vocals let the music down." I then concluded with "Perhaps with more experience however The Dirty Youth can make a go of it."

Well they now have over a year's worth of added experience and they are definitely making a go of it. The improvements are obvious tonight and in particular Monroe has now assumed the focal point role that is required of her. They show tonight what hard work (and I guess politeness) can achieve as by the end of their performance they are able to leave the entire crowd wanting more, which is precisely what young bands need to do. In my opinion they are now ready to take it to the next level and I'll be interested to see where they are in another year's time.

The latecomers in the audience have now arrived and the venue although not sold out is full and ready to rock. InMe have been around for some fifteen years now and have had their highs and lows but have always stuck to their morals and done things their way. This is best demonstrated by their ambitious project 'Trilogy', described as three thematically distinct albums and entitled 'Dawn', 'Sentience' and 'Quietus'. These again will stick to the theme of doing things their own way by being released via Pledge Music, a platform that InMe and front man Dave McPherson in particular have made their own in recent years. 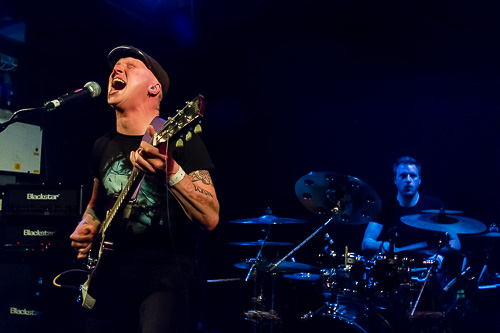 The first of these albums made available is 'Dawn' and it's with a new track 'Creation: Amethyst' that opens proceedings tonight, a sure sign of the bands confidence in their latest creation. During this opening number McPherson breaks a string on his guitar and this starts the theme of the evening as their performance is dogged by technical issues. Things even get to the point early on that whilst the drums are under repair that McPherson is left to entertain the crowd with an unplanned rendition of Tenacious D's 'Fuck Her Gently'. Despite the issues the set never really loses pace thanks to the bands professionalism and their banter during the delays.

InMe enjoy a diehard fan base and those in attendance lap up the likes of 'Cracking The Whip' and early single 'Firefly'. McPherson and co are clearly proud of their entire back catalogue and not just their early successes a point they make before playing 'Firefly'. As ever with an InMe set list they mix and match between albums and have no problem picking album tracks over even their biggest single 'Underdose' which is missing in action tonight. For most bands this might elicit a bad reaction but even come the end of the night and they announce 'Chamber' as their last song the crowd don't miss the singles.

Their fan base is so die hard they almost prefer the rarer cuts and if any band can pull that off its InMe. Their musicianship is of the highest order and whether new song or old they get the same response as fan favourite 'Faster The Chase' which says a lot. InMe are undoubtedly one of the most underrated bands of the last fifteen years, but as long as they keep making the music they love their loyal fans will remain. 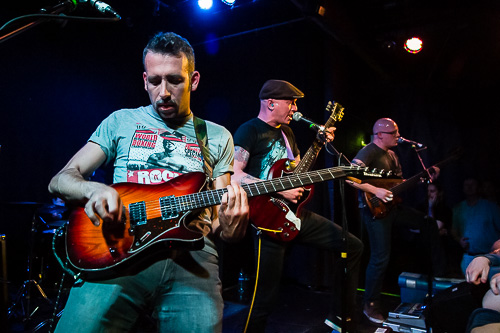