Just in case you are unfamiliar with Madness, they are an English ska-pop and 2 Tone outfit hailing from Camden Town, London. Formed in 1976. Since then they have built up an army of followers and had numerous hits throughout their career.

Their appearance at Nottingham's Capital FM Arena was the opening night of their 'All For The M.A.D.H.E.A.D' tour.

Supported by Scouting For Girls, who headlined their own show at Capital FM arena six years ago, it was a pleasant surprise to hear all of their radio friendly melodic tunes once again. 'She's So Lovely' was the highlight of their set. 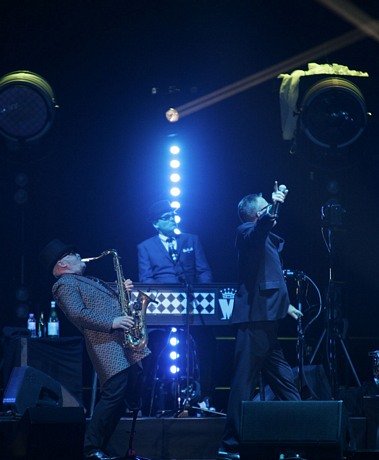 Madness have had a recent alteration in their line up with the departure of trumpet player and backing singer Chas Smash, and there is no way round the fact that despite Madness being good to watch, their shows just seem to be missing the energy that Chas was able to bring to the mix.

As always with a Madness show, lots of their fans turned up wearing red 'Ali Baba' fezes which turned into a frenzied sea of red when Madness open with 'Night Boat To Cairo'. Madness mixed their setlist up with old and new songs, the fact that they are able to still write new songs is an achievement in itself after 30 odd years together..

Frontman Suggs was as energetic and enthusiastic as ever, He gave the impression that these songs are fresh and that he loves singing them. Even some of the older hits which he must have sang thousands of times before never came across as a chore. The band sounded great and for this tour they have brought an incredible light show and use of video screens to turn their show into an all encompassing visual spectacle.

However it was the big hits that turned the arena into one gigantic party, hits like 'It Must Be Love', 'House of Fun' and 'Baggy Trousers' all got the crowd dancing and singing along.

Madness always put on an exceptional show, and this was no exception. Considering the price of tickets nowadays, you can always guarantee getting your moneys worth with Madness. 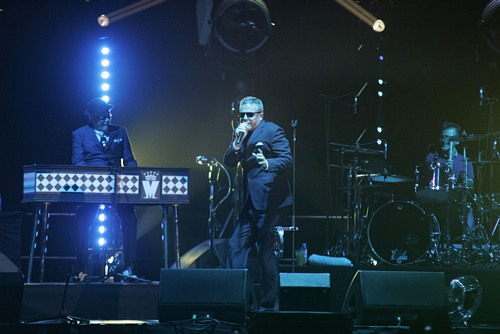 Night Boat to Cairo
Embarrassment
NW5
My Girl
Take It or Leave It
The Sun and the Rain
Dust Devil
The last rag and bone man
Return of the Los Palmas 7
The Prince
Lovestruck
Bed and Breakfast Man
Shut Up
Mummys Boy
Leon
House of Fun
Wings of a Dove
Baggy Trousers
Our House
It Must Be Love
Encore:
One Step Beyond
Madness
Papa's Got a Brand New Pigbag