I refuse to pay £9.10 for two to three hours parking. This is the deal at the car park slap bang next to the O2 Academy. Totally unjustified for that car park too. Heading down the road five minutes there is a new car park available for nearly £3 less. There, don't say we never give you anything!

Whinge over, although the further walk means we miss a little of The Selecter, who have the place alive and dancing as we arrive. It's a 2 Tone delight, with tracks mixing elements of originals and covers, for example The Ethiopians 'Train To Skaville' and Toots & The Maytal's 'Too Much Pressure / Pressure Drop'. 'James Bond' is a great version and you wonder why it was never ska originally. Ska spy! There's also The Avengers theme in there too, great stuff.

Pauline Black leads the pack as one of the original rude girls, and the skanking crowd get a thorough warm up before the Levs hit the stage. 'On My Radio' is a huge hit for the crowd. It's the perfect way to start a Levs show (She Makes War were great beforehand a friend tells me). For a band celebrating their 35th year they show no signs of slowing down.

The Levellers waste no time getting onto the stage. This is the Greatest Hits tour, following the release of their Greatest Hits CD/DVD package earlier this year. Every show of the Levellers has a huge selection of their greatest hits, and they, unlike many other bands, do not seem to mind playing them over and over, instead focusing on the crowds enjoyment; how a true band should react. 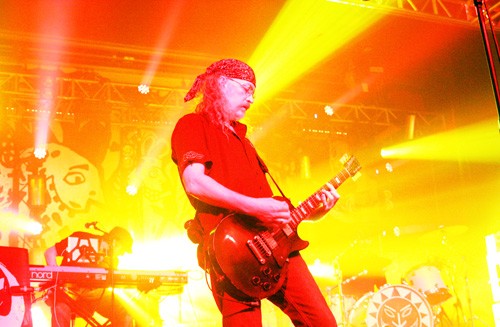 It's straight into 'Beautiful Day' and huge bangs from the stage result in loads of large confetti pieces raining onto the excited crowd. I have not been to one Levellers gig and seen any unhappy faces; everyone is there to enjoy the music, young or old, sober or (majority-wise) tipsy.

Normally the Brighton folk punkers do not rely on fancy light shows, but for this tour it is seen as a true celebration of their back catalogue. Not that their popularity has anything to do with single sales their shows continue to sell well, if not sell out, to this day, as does their festival, such is their well-deserved following. They are loved regardless of singles sales (means nowt about taste anyway by today's standards of 'quality' music, in my opinion). The addition of lasers on this occasion really do add to the show; they did tend to dazzle me at the back now and again but that was due to a bad cold Aargh! Bright lights!

Today's set though has all the singles, including one that I rarely hear live, 'This Garden' with She Makes War's Laura Kidd on vocals. Pauline Black also provides outstanding guest vocals on 'Together all The Way'. The Charlie Daniels Band are covered as usual with 'The Devil Went Down To Georgia'. Mark Chadwick gets the crowd to song in the gap of 'Carry Me' by following Simon Friend's harmonica lead. 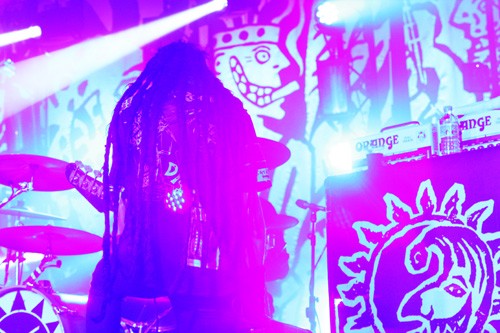 For 'Julie' the lady that is present every time The Levellers play locally (and maybe more, I regrettably don't get to every show!) is standing on two peoples shoulders in the middle of the pit dancing away. It's like tradition now; I don't know who she is but surely the guys holding her up need a break from it! I must say it slightly amuses me, and this hasn't happened before from what I have seen, but four people get up after that on others shoulders and look like they are trying to copy her. They just can't do the Levs totem like those three though!

It's a small shame that they only play 'The Boatman' jig; the awesome part of the song at the end, with drummer Charlie Heather moving around the stage like a marching drummer and with Stephen Boakes on the didge in head to toe UV. Chadwick jokingly says he is allowed to stay on stage, as he's needed for 'This Garden' and 'One Way'.

The crowd have certainly not had enough by the time 20th song 'Liberty' is aired. The encore starts with The best drinking song, 'Just The One'! Unfortunately we miss personal favourite 'Riverflow' as we can't afford to pay more for the parking, but I'll no doubt bet it was as excellent as always and finished off a truly outstanding and enjoyable Levellers gig. 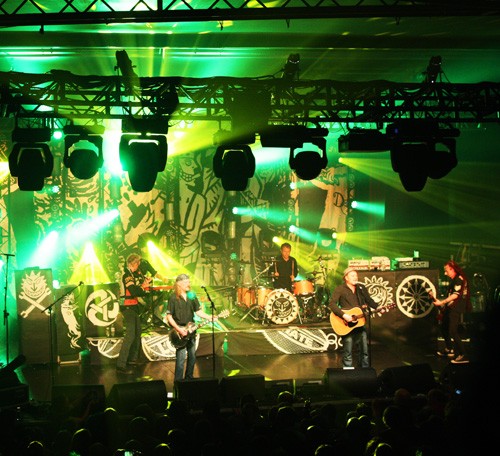 Just The One
Devil Went Down To Georgia
Riverflow