Fifteen years ago the seeds were sewn by guitar maestros Herman Li and Sam Trotman for what soon morphed into the power metal juggernaut DragonForce. Since then the band has released six studio albums, undergone numerous line-up changes and most importantly entertained countless fans across the world with their breakneck speed performances.

2014 sees the band return with their sixth studio album, 'Maximum Overload'. This effort is the second to feature Marc Hudson's vocals and also the last contribution of former drummer Dave Mackintosh, who departed in June. Tonight sees DragonForce, along with new drummer Gee Anzalone, bring 'Maximum Overload' to the Waterfront in Norwich.

It's a Friday night and the people of Norwich appear to have taken the opportunity to enjoy a night out at their local venue, something which more people need to do across the country. It's a decent crowd tonight, not surprising given the fact that the city's larger UEA LCR venue usually houses DragonForce when they come to town. 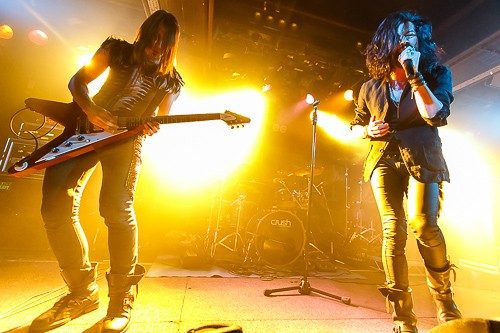 Kicking the evening off in just the right way are Neonfly, who are no strangers to the stage having already supported the likes of Alice Cooper and Magnum in recent times. Their show is slick and seamless and singer Willy Norton's interaction with the audience helps create that ever so important connection with the crowd. Their music may not be ground breaking in the metal world but what they do, they do well and they are the perfect fit for this tour.

Tonight's show comes towards the end of what has been a lengthy tour around the UK. As mentioned, on their numerous previous visits to Norwich they've been housed in the city's bigger venue. This tour has been dubbed that magical "intimate" word and as such their stage show is somewhat downgraded as well with simply a backdrop decorating the stage. This isn't a problem however as it gives a chance for their music to do the talking. 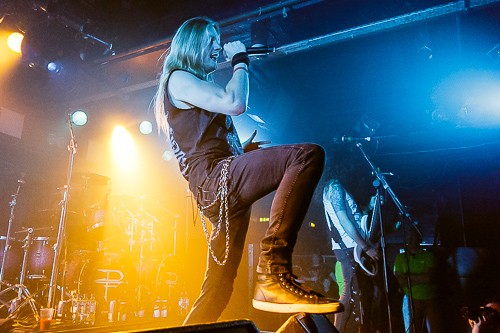 And talk it does with a set list full of new material as you would expect. In fact, they start the show with new tracks 'Defenders' and 'Three Hammers' sandwiching older track and fan favourite 'Fury Of The Storm' from 2004's 'Sonic Firestorm'. This is a formula that the band follow throughout tonight's show mixing old with new. They do well to touch on all six studio albums as the show progresses and next up was the sole offering from their 2003 debut 'Valley Of The Damned' in the shape of 'Black Winter Night' much to the delight of older fans in the crowd.

A highlight of any DragonForce show has always been the interaction and horseplay of their founding members and musical focal points Trotman and Li on guitar. Tonight is no different as the two trade guitar solos and hand gestures. Bassist Frederic Leclercq and Keyboardist Vadim Pruzhanov are long standing fixtures in the band and are now as much a part of the furniture as Trotman and Li. New boy drummer Anzalone appears to have had an easy transition into the group and from tonight's performance the uninitiated probably wouldn't be able to notice he has only been onboard for a few months. 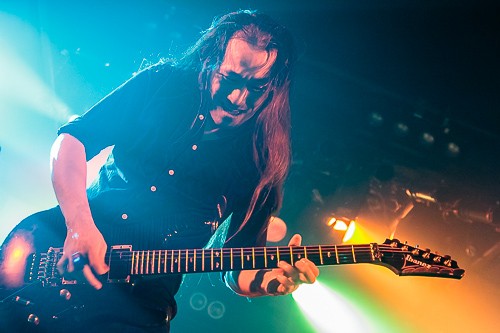 Vocalist Hudson does draw the crowd's attention to this during the show however, possibly happy no longer being the new boy himself. 'Maximum Overload' is Hudson's second offering as DragonForce vocalist and it's nice to see his continued growth both as a singer and as a front man of the group. Having previously only played as a guitarist in pub bands it isn't an exaggeration to call Hudson's rise to fame a fairytale.

It's a fairytale he appears to have grabbed with both hands and he certainly looks more comfortable in the role now he has two albums and hundreds of shows under his belt. Whilst touring the bands previous album 'The Power Within' there was an awkwardness to Hudson's crowd interaction, as you would appreciate coming from someone with little experience as a front man and especially playing in front of that many people. Tonight is different however as Hudson regularly checks in with the audience and is at ease in doing so.

Next up in the set is a track from Hudson's debut 'The Power Within', the very well received 'Seasons'. We then get a trilogy of tracks from 'Maximum Overload' as the band power through 'Symphony Of The Night', 'The Game' and 'The Sun Is Dead'. Given the generous length of most DragonForce songs time tonight is starting to run out and we have time for two huge fan favourites, 'Heroes Of Our Time' and 'Cry Thunder', before the band must leave the stage for as Hudson puts it "no reason." 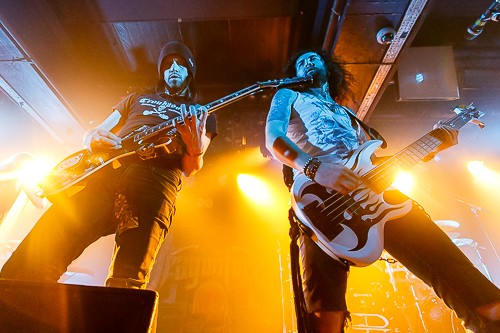 Of course the band return to the stage for the obligatory encore which starts with their unusual take on 'Ring Of Fire' made famous by Johnny Cash. Now comes the moment in the evening that is a no brainer, that last song of the night. DragonForce are a band that are both lucky and cursed at the same time. Lucky to have had a song become so famous they've made a career on the back of it, but cursed because if they didn't play it there would likely be a riot.

There has been some discussion in the media lately, without naming names, regarding bands not playing that one song that everyone wants to hear. The general consensus being that those bands are simply selfish. Thankfully DragonForce aren't as they finish with 'Through The Fire And Flames' and send the fans home happy.