Arriving at the Picturedrome, Holmfirth's cosy concert venue, Bad Cardigan have already started their half an hour set. Tom Randall and Jack Anwyl hail from Blackburn, the duo playing acoustic guitar and singing, harmonising on both with great effect. The young dudes have supported The Levellers in the past, and are back for round two. There is an element of indie in their acoustic folk, and their influences seem to be Alex Turner with some Bon Iver thrown in, sometimes singing like Damon Albarn without the accent. The local Blackburn accent is easily heard though; it's always good when performer keeps true to their voice! 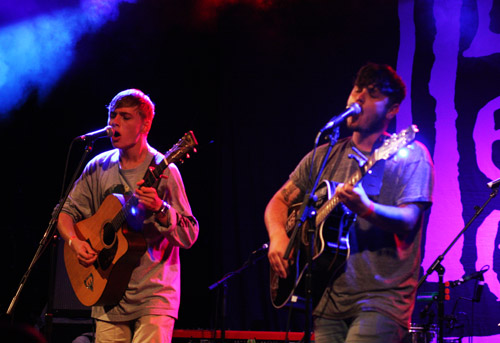 There are slower tracks like 'Nursery Rhymes' and the slightly medieval tempo of 'The Goodies'. Stand out track for myself is 'The Mess Express', which is more upbeat and full of those lovely guitar solos. Basically this duo can play a wide range of styles and are well worth a listen.

The Levellers are returning to the Picturedrome after a year to play through their extensive back catalogue. With a greatest hits tour later in the year taking in most of the country with The Selector as support, this is a nice chance to see them before their own festival Beautiful Days, which is again sold out (rightly so) and Galtres Parklands Festival up the road in York in August. A couple of other festivals (On Blackheath, Ramsbottom) await the Brighton folkers before the winter tour. 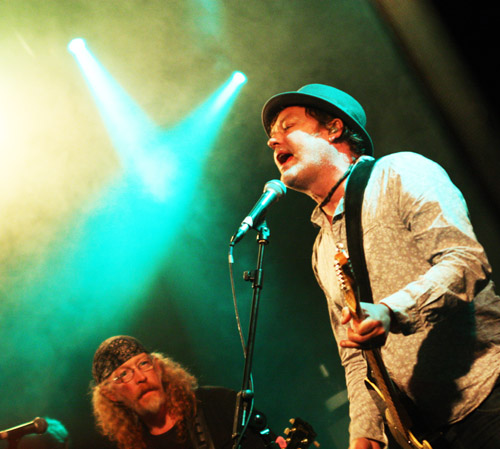 Tonight the place is also sold out, with people arriving during Bad Cardigans set. The balconies are already full, along with the newer balcony halfway up the wall stage right. This would prove to be a warm place to stand I have been to a lot of gigs in a lot of venues over the country, but tonight's show is truly red hot. There is no air it really is a sweat box. I normally dance throughout the Levellers set, but cannot manage even a handful of songs tonight. The front doors are open but it's not enough. The band comment on it and the many red sweaty faces back it up.

This does not take anything away from the show though. The crowd are loving it, dancing to the hits 'One Way', 'Liberty', 'Fifteen Years' and 'Beautiful Day', and the band are loving the atmosphere. 'Sell Out' gives the packed crowd a rest before it's a true onslaught of Levs faves with 'Carry Me', 'Dirty Davey' and 'Riverflow'. Honestly, talk about a workout!

Stephen Boakes is up to play the didgeridoo as usual in the UV face paint and with his trusty tube covered in fairy lights. Mark Chadwick shouts him to come back onstage but keeps calling him Monkey! He does and bouncers around the stage, playing air guitar with the didge and jokingly facing off Simon Friend and Jon Sevink, earning a loud cheer from the crowd.

Halfway through 'Carry Me' Mark invites a fan onstage to sing the rest of the song. A bare chested man with a large Levellers tattoo on his back obliges, and proceeds to sing the song. Not so much in tune, but the crowd gives him an A for effort.

The encore leaves a moment for people to run out for some air, but most brave souls stay in for 'Another Man's Cause' before the excellent 'Battle of The Beanfield', with 'devil Went Down To Georgia' to finish.

The human totem pole is here again; not dead set centre in the pit this time, but near enough. In all my years of watching the Levellers live, the same lady has been at every live show I have been to, plus some for The Wonderstuff, amongst others. She is hoisted above the crowd on a man's shoulders who in turn is sat upon another man's shoulders. Does she have mobility problems and this helps her see? Does she buy those poor fellas a ticket so they can hold her up for most of the show? Does she know the Levellers / do they know her? So many questions. I guess one will never know. Anyway back on topic, check the Levellers out at a festival soon or wait for the cooler weather and see them on the October / November tour.