You can always tell when Ginger Wildheart comes to town as it's one of those rare occasions that it's not a faux pas to wear a T-shirt of the headline act to their own gig. Just walking around the surrounding areas of tonight's venue I spot numerous shirts walking around, sitting in the restaurants and already queuing to enter The Junction here in Cambridge.

Ginger, born David Walls, truly is one of the hardest working men in rock. He always has a project or two on the go and then there is also The Wildhearts constantly hanging over his head. Having formed the band in late 1989 after being sacked by The Quireboys, Ginger has fronted the band on and off ever since. The band have enjoyed moderate success in their career but have always been hampered by internal strife, with multiple break-ups/hiatuses over the years. 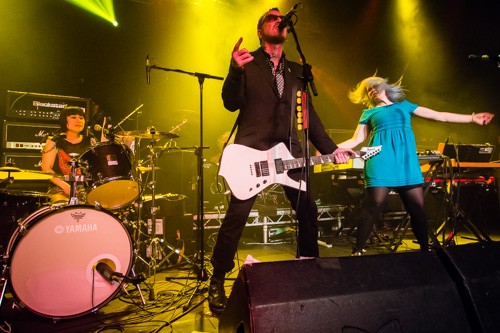 The Wildhearts again reformed for a one-off show in 2012 but the success caused the bands continuation and here we are tonight. This is the penultimate night of the tour which has featured Ginger's side project Hey! Hello! as the opening act  told you he was hard working didn't I. Hey! Hello! is a collaborative effort from Ginger and New York based singer Victoria Liedtke created in 2012 when they recorded their self titled debut album.

Playing numerous tracks from said album tonight Hey! Hello! are a really fun start to our evening. The venue is already filling up as Ginger's dedicated fans arrive early to catch one of this groups debut UK shows. For the most part Ginger takes a back seat to the cheerful Liedtke who plays the front woman really well. Her charisma is there for all to see and together with Mr. Wildheart they make a formidable team. The audience love every moment and I'm sure I'm not the only one who hopes this band continues to make music and tour in the future. 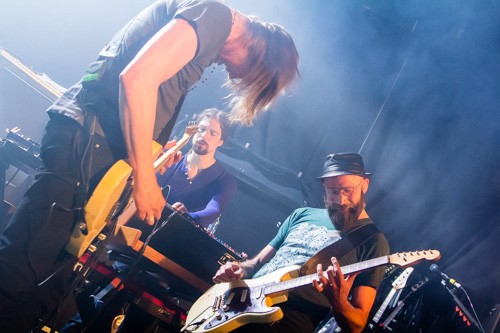 Giving Ginger a short break are the tours main support act, all the way from Finland, the Von Hertzen Brothers. The clues in the title with these guys as the groups three most prominent members are brothers, and their surname? You guessed it, Von Hertzen! Mikko, Kie and Jonne started the band way back in 2001 and together they have released five albums and enjoyed a successful career back home.

They have built up a good reputation over here as well so I was looking forward to their performance in advance. Thankfully I'm not disappointed as they play a hard hitting and passionate set which demonstrates the collectiveness of the brothers. Having grown up and played together so long it's a tight performance as you would expect. This certainly is a band to keep an eye out for as they really are very good live.

As they leave the stage though the mindset of the crowd quickly resets to the reason that we are all here tonight. Soon that man Ginger returns to the stage bringing with him guitarist CJ, drummer Ritch Battersby and bassist Scott Sorry, aka The Wildhearts, and the crowd goes mad. The band quickly kick out 'Nothing Ever Changes But The Shoes', 'TV Tan' and 'Nita Nitro' before Ginger takes time to address the crowd. 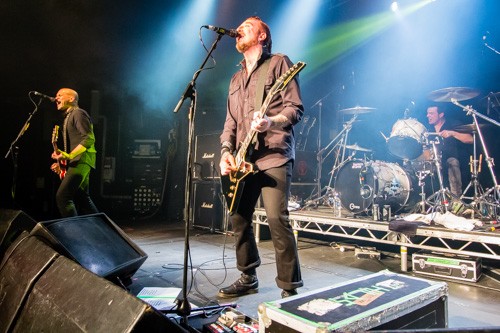 Always a talker, Ginger throughout the night takes time out to converse with his gathered following. The Wildhearts always provide a good night out with their hard rock style that comes with a pop twist. The fans tonight are also in good form singing along to every word, even if Ginger does suggest that they are a little subdued.

The set list tonight is taken from across their career and as Ginger suggests it's taken some time for them to come up with. The likes of 'Vanilla Radio', 'The Revolution Will Be Televised', 'Suckerpunch' and the classic 'I Wanna Go Where The People Go' feature before the band leave the stage with Ginger quipping see you in a couple of minutes.

It's good to have these staples of British rock back on the scene as they give the fans exactly what they want every time. Talking of giving fans what they want, out they come again for what's an extended encore. Fans have been singing throughout the wait and the band acknowledge this on their return. Singing along is a feature of the encore with the likes of 'Geordie In Wonderland' and '29 x The Pain' in amongst the lengthy set of songs. Well done then to all three bands for a fun night out and to that man Ginger whom one audience member dubs a legend, to which he responds "don't you have to be dead to be a legend?" 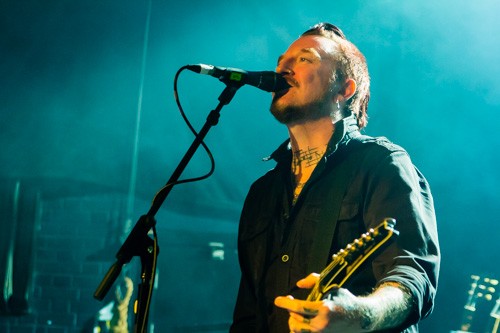