According to talk, the future of The Waterfront in Norwich is in doubt due to falling attendances and profits. This is potentially devastating news, not just for me having attended the venue regularly for ten years, not just for the city of Norwich, but for the whole of East Anglia. The region is already sparse of decent live music venues and the death of this beloved hangout would be disastrous for music fans.

The Waterfront is a great venue that has always been able to attract new and old bands to its stage. Its alternative club nights are a godsend to rock fans in the area and we can't afford to lose this staple of the Norwich music scene. Every week the venue is host to well known musicians and tonight is no different, so I make that regular pilgrimage to the Waterfront to witness 90's alt metal band Therapy?.

Playing tonight are two bands at very different stages of their careers. Therapy? have probably already enjoyed their most successful period whilst support act Lonely The Brave are at the beginning of what will hopefully be a very fruitful career. Lonely The Brave have unlimited potential, but you can't make a living off potential and it's time for them to make their mark.

Lonely The Brave are no strangers to the stage having already supported the likes of Don Broco, Deftones and Black Rebel Motorcycle Club and appeared at festivals such as Download, Hard Rock Calling, Reading and Leeds. Most importantly they have just completed their first headline tour, which by all accounts was a big success. 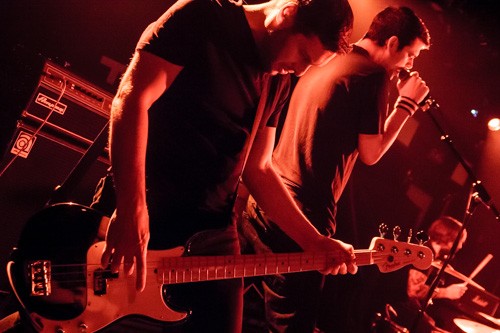 Having caught them at the hometown Cambridge date of said tour I'm already fully aware of what the band can offer as they take to the stage. Looking around the packed venue I'm not the only one as a vast quantity sing back every word of the likes of 'Black Saucers', 'Trick Of The Light' and 'Deserter'. Lonely The Brave are building a very dedicated fan base which is impressive on the back of only an EP 'Backroads', the title track being a highlight tonight.

How far this band can go will be answered when they release their debut album 'The Day's War' at the start of June, just before they return to Download Festival. If the EP was anything to go by then they are destined for great things. As far as tonight's performance goes it does its job nicely. It warms the Waterfront crowd up ready for our headliners, but surely also wins over a venue full of new fans.

Having just witnessed the future of rock, it's now time to reminisce about rock's past, specifically the 1990's. I can actually be even more specific and say 1994, because that's the year (exactly twenty years ago) that Therapy? released their seminal 'Troublegum' album. To celebrate they will be performing it in full tonight along with a selection of other tracks from that era.

The venue is ready to erupt as Andy Cairns, Michael McKeegan and Neil Cooper take to the stage and erupt they do as the band launch into 'Knives' and 'Screamager'. It's hot and sweaty in here tonight but the fans don't care as they mosh their way through classics like 'Nowhere', 'Die Laughing' (tonight dedicated to the unlikely duo of Kurt Cobain and Peaches Geldof) and the raucous 'Trigger Inside'. 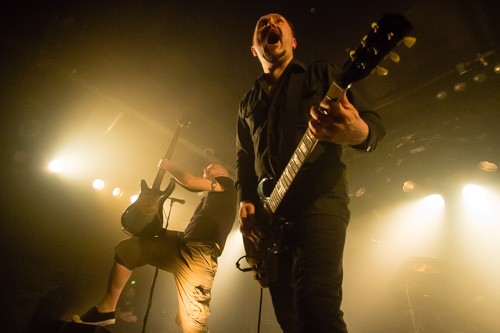 Looking around the crowd there is evidence aplenty of the legacy Therapy? have created. This venue isn't just full of fans reliving their youth but is also loaded with new fans that were unlikely to have been born when 'Troublegum' was released. Although their commercially successful period is long gone, Therapy? are still a band that can thrill a live crowd and there is no better evidence than their performance this evening.

It's a flawless set that shows little to no ease, not that the fans complain giving it their all throughout the night. There is passion and energy on display all night from band and fan alike and that creates a fantastic atmosphere in which to savour the music. Even after the band finish up their run through of 'Troublegum' they push on with another slab of music from that era to the delight of the crowd.

Therapy? may not trouble the charts any more by they can still fill a venue and own its stage. The likes of 'Teethgrinder' can still send an audience crazy and I can't see that ever changing. During the 90's the band created a body of work as good as anyone's and there will always be a demand to hear it. Thankfully the band don't simply rest on their laurels they continue to write and record new material and with any luck they will be back out on the road soon playing some newer tracks along with the classics.

Tonight really has summed up what this treasured local venue is all about, supporting new music and celebrating past glories. Most of all though it's about having a good time; something I'm sure everyone has done tonight. So, what's the moral of this story? Get up off the sofa and get down to your local venue because the Waterfront isn't the only one in trouble. Now more than ever live music needs your support and why not join in when the entertainment is as good as tonight's. 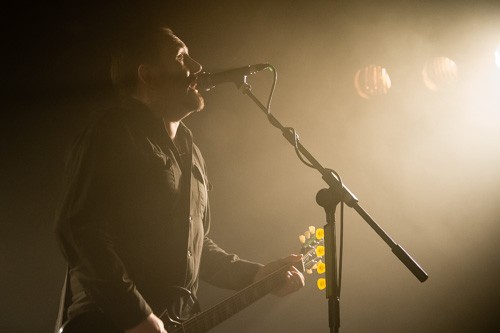