Tonight was all about the totty from Bradford, Heather Peace. The 'Waterloo Road' star, actor turned singer, or singer turned actor, the latter is probably true, as she's classically trained you know, and was in town to set out her stall before she gads off to Oz to do a few shows. (lucky girl  don't suppose you need a photographer do you?)

I've seen Peace on numerous occasions, the first time was during the lesbian drama 'Lip Service' which turned out to be a cult show with the following of the masses, after a few pin ups and full page spreads in Lesbian mag 'Diva', which would make any lesbian foam at the mouth, Peace's rise to fame was meteoric. She has one of the strongest Lesbian followings I've seen (apart from Pink and Anastasia), even having a little fan club, who follow her around everywhere called 'The Peace Core'.

Tonight sees a larger venue than normal as Peace usually plays The Glee in Birmingham, so it'll be interesting to see if she can transform her craft into the bigger venue. 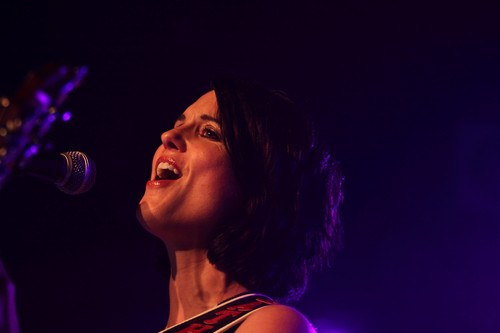 This show sold out in minutes, which isn't surprising really as everyone wants to get a look at the hottie from Waterloo Road. The funny thing is at all the previous Peace gigs I've been to before, you can spot all the fans who follow her around, and it never ceases to amaze me how they all linger on her every word. With her Colgate bling teeth and slim figure Peace has them all in a trance, and tonight is no exception.

Support was provided tonight by Black Country girl Amity with her KT Tunstall-esque spin on things, a one women orchestra using acoustic guitar and ukele, which warmed the crowd up sufficiently for Peace.

The venue was jammed full with women, there were token men thrown in the mix to try and even things out,  but that wasn't likely to happen and I think I only spotted four on my rugby scrum to get the pit.

The only other gigs I've seen the crowd so one sided in the audience are the Pink and Anastacia gigs, as they too have a massive LBGT following.

Peace came on stage at 21.00 hours, looking as hot as ever, wolf whistles, screams and shouts when she came on stage, she cherished in it and showed her appreciation by smiling the biggest smile ever.

This was an acoustic set with, again, just Michael Clancy for company on stage and her keyboard.   The songs had been stripped back and Peace's voice shone through, it seems her voice has been streamlined and it just echoed around the venue. I was impressed. She's come a long way.

'Sabotage' kicked the set off which I never tire of hearing, you can hear Peace's passion and quality song writing with every song she plays, she means every word of every song. 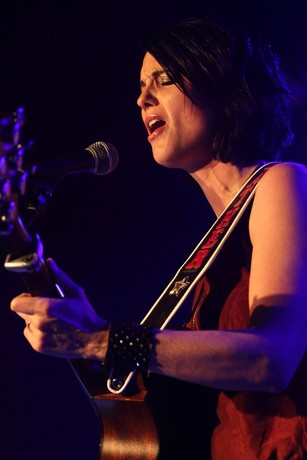 The set was a mix of old and new, even in the pit for the first three shooting away I could hear the first few rows mutter every word of the three songs, amazes me totally. How many gigs have they been too? And, How many times have they played Peace's CDs? Loads and loads as tonight showed.

The set consisted of old and new songs with a few covers thrown in the mix. 'Familiar Creature', 'The Thin Line', 'Love Affair with Misery?', 'Forever Drowning', 'Lost', 'Your For Keeps', 'Fight For', 'We Can Change', a cover of 'Girls Just Wanna Have Fun', 'House For Your Broken Heart', 'I Pick Flowers' and 'Marry You'.

I think you can see what Peace's appeal is, easy listening music not hard on the ears, the kind you can listen to anytime, any place, any where - and no it's not a Martini (Showing my age!). It's no wonder she has such a massive fan base and she's adored nationwide by the LBGT community.

Watch out Australia cause she's coming to get ya, no doubts the tour is gonna be a sell out. Peace's second album  is nearly done and dusted and a lot of the diehard fans are waiting with baited breath for it to be released. I eagerly anticipate the new album, like everyone else. Roll on the next tour I say.