When the most recent incarnation of Thin Lizzy announced that they wanted to record new material nobody could have predicted the controversy it would cause. They had always faced criticism for supposedly milking Phil Lynott's legacy and for being as some people would say  no more than a tribute band. I always thought that the tribute band remarks were quite harsh considering the involvement of numerous original members. But then I can see the point of the view that even if a band still has all its original members it's nothing more than a tribute band without new material.

I therefore found it somewhat refreshing when the band stated their desire to record together. The chemistry between the boss Scott Gorham and vocalist Ricky Warwick has been clear from the get go, so why shouldn't they get to write new music together. Not everyone concurred and after much debate it was agreed that there shouldn't be new Thin Lizzy material without Phil Lynott. Rise up the Black Star Riders then. Featuring most of the last Thin Lizzy outfit and completed by former Megadeth (amongst others) drummer Jimmy DeGrasso, they set about making what would become debut album 'All Hell Breaks Loose'. 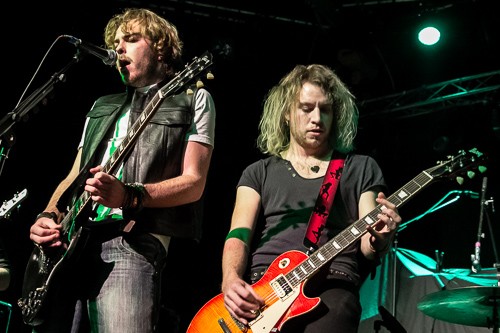 This album has proven the talent of this band and is a solid debut which clearly bares Thin Lizzy's influence. With the album out there it's time for the band to take to the road and tonight comes at the start of a lengthy UK trek. Playing host tonight is the Junction in Cambridge, which is still fairly empty as our opening act Western Sand take to the stage. This young four-piece do their best to warm up the small crowd and do a decent job. Their youthful take on the classic rock genre is energizing and fits very nicely on tonights bill.

Tonight's bill is however dominated by its two supergroups. We know one is our headliners Black Star Riders, but who's the other? Well if you take a closer look at our main support The Dead Daisies you might recognise a member or two, seeing as they have played in some big bands. A quick run through the line-up then  Jon Stevens (INXS), Charley Drayton (The Cult), Richard Fortus (Guns N' Roses), Darryl Jones (The Rolling Stones (whoever they are)), David Lowry (Mink) and Dizzy Reed (Guns N' Roses). Not bad hey? 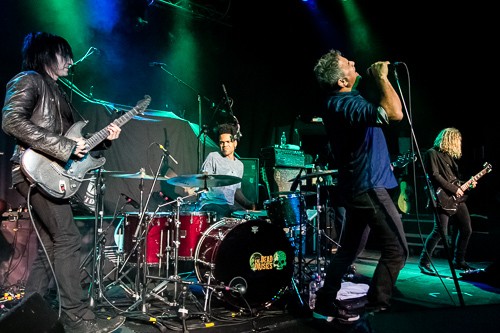 With their debut album out now, the band are out on this tour along with a recent London headline show of their own in promotion. I have to say that tonight I'm very impressed as is everyone else in the ever growing audience. It's a confident performance by some seasoned and very talented musicians. The band are clearly enjoying their time together, but refreshingly also appear serious about their collaboration. They have some very good songs with recent single 'Lock N' Load' already a fan favourite. Hopefully The Dead Daisies are more than a short lived vanity project and can deliver on their great potential.

By now the venue has filled up and anticipation is high for Black Star Riders. With them coming onstage slightly later then billed, I can't help but wonder if the band are trying to impress the Guns N' Roses members in attendance. All joking aside this is a powerful performance from a close knit group of friends who have been bound together by all the drama that has surrounded their musical partnership.

Kicking things off with the title track of their debut album, the fantastic 'All Hell Breaks Loose' the band set the pace early. It's a pace that doesn't really let up and the band plough through a mix of new material and classic Thin Lizzy songs. Happily the new material gets just as good of a reaction as the classics, which in my eyes justifies the decision to explore the bands creativity. 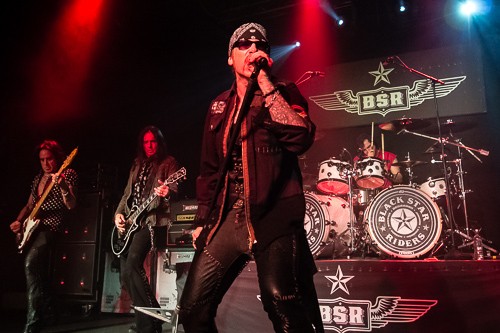 Of course some of the highlights are the likes of 'Jailbreak', 'Massacre' and 'Emerald' which incite memories of days gone by, but for me two of the best tracks tonight are new ones. 'Before The War' and 'Bound For Glory' both solidify my belief that this is a great band with or without the Thin Lizzy heritage. Ricky Warwick is a great front man and his voice still does justice to Lynott's as demonstrated on main set closer 'The Boys Are Back In Town'.

An impressive and impassioned show is brought to a close by the phenomenal 'Whiskey In The Jar' and 'Rosalie', which send the crowd home happy. If you have any doubts remaining over the whole Thin Lizzy/Black Star Riders saga, get over them fast and catch a show on this tour because you won't regret it. Three very good bands  one great night!