All through the summer the Isle of Wight is awash with festivals (this year we have at least seven). In the winter, if you want to expose yourself to something more than the local acts, then you have to bite the bullet and brave the local ferry companies and head to the mainland. And so it was on a balmy (at least by this years weather) April evening we found ourselves in Southsea heading towards the Wedgewood Rooms for King Charles.

Stuck out of the way on a fairly unremarkable stretch of road awash with dog grooming parlours, chemists and kebab houses, the Wedgewood Rooms is one of the best venues on the south coast. Although small, at only 500 capacity, it offers an intimate experience that frequently sees it play host to much larger bands than other venues of similar size. 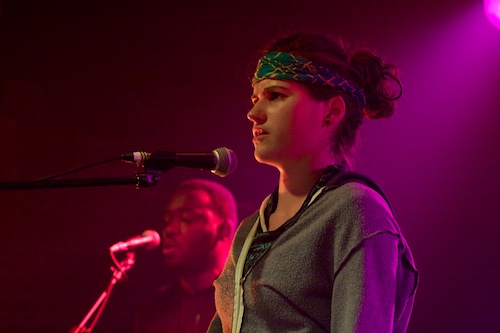 First up this evening was Giovanna, whose ambient noodlings came across as someone trying to aspire to Bat for Lashes but failing miserably. This may be a little harsh, but the songs, whilst competent musically, never seemed to do anything, tailing off just as they threaten to go somewhere interesting. Giovanna herself seemed to be a bit disinterested in the show too, mirroring the audience who stood and chatted while she did her thing. After 20 minutes they barely noticed her leave the stage, with barely a flutter of applause to see her off. Far more interesting was the off-stage entertainment of watching King Charles Bass player trying to get backstage through the security, having forgotten his pass.

Second act of the evening were an almost complete contrast to Giovanna, a noisy guitar five piece called Story Books, who had all the moves and presence, the lead singer coming across as a youthful Jarvis Cocker. His voice was good and the songs were good to jump around to, engaging the growing audience. The only down side is that the band haven't really got that 'killer' song yet, and so while pleasant enough at the time, half an hour later I couldn't have hummed a single note of anything they played. If they can get that song then maybe they can elevate from support to headline act. 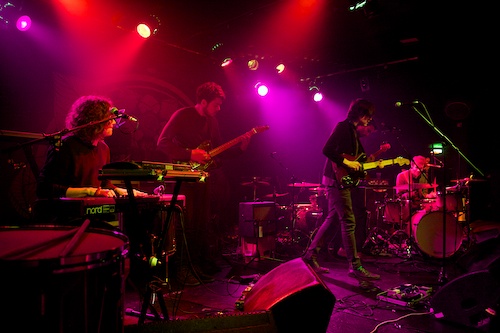 There was certainly no doubting who the crowd were there to see though as Story Book left the stage, the atmosphere in the room changed noticeably as the crowd got ready for the main act. Having seen King Charles several times before at festivals, I thought I knew what to expect, but I was taken aback by how relaxed on stage, possibly something to do with his moccasins (and I'm sure the bass player was wearing slippers), but I really don't care what they were wearing when they play as well as they do.

The first couple of songs started slow and confident, but by the third track, 'Mississippi Isabel' he'd hit his stride and the performance really started to take off, with the energy coming off the stage infecting the audience who were now really starting to enjoy themselves. King Charles is one of those artists who clearly enjoys what he's doing and as the show goes on he draws the crowd in with him, taking them higher with each song.

Halfway through the set he introduced a new song, the upbeat 'Dance Forever', which showed he still has songs in him, and bodes well for the next album. This was followed by the darker 'Polar Bears', which live takes on a snarling edge that toys with metal riffs and shows that, despite the well-written ska-pop that forms the core of his music, Charles is not afraid to let loose once in a while, even attempting a bit of crowd surfing, at least until the security guard pulled him back  even the acts have to bend to their will it seems. 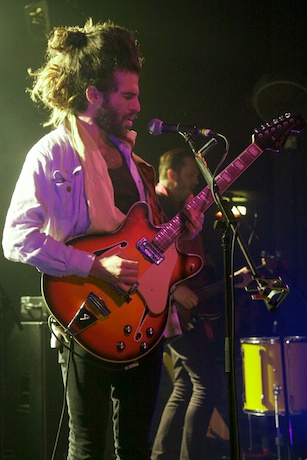 The rest of the set passes in a blur of dancing, both on stage and off as Charles let rip with his big guns  starting with the Mumford and Sons co-penned 'Brightest Lights', 'Bam Bam', and finishing with the anthem 'Lovelust'.

The encore started off gently with another new song  'Tomorrow's Fool', an introspective that gave the audience a chance to catch their breath. To close the show the band performed a cover of Billy Joel's 90s protest song 'We Didn't Start The Fire', with lyrics updated to cover the last three decades, covering topics such as Live Aid, Glastonbury and Laura Marling. As the song continued it got more and more raucous, until it seemed that one band could't perform it on their own. Fortunately help was at hand in the form of Story Books, who invaded the stage armed with guitars to pick up the slack. After that the whole thing could have derailed into a mess, but fortunately the crowd were more than up for it, and lapped up the antics on stage.

You got the impression that this could have lasted for another hour, but sadly the curfew meant that they had to stop. This is how music should be  loud, clever, occasionally gentle, but mostly fun. King Charles is definitely one of the most exciting artists about at the moment, and if you get the chance to see him over the summer you'd be a fool to pass it up.