Despite not having heard Squarepusher material for a few years, the description from promoter Soundcrash promises "an audiovisual assault featuring a synapse shorting LED display designed and programmed by Squarepusher himself". Well, how can you say no to that?

So, crawling through the London traffic we get to the grade II listed venue that is The Roundhouse. If you haven't been to the Roundhouse, I can't praise it highly enough. The queues to get in, even at the busiest times don't take more than a few minutes. The venue, being circular (no really), offers a great view from anywhere on the floor, and the sound doesn't get lost or bounce around, in such a big open space. 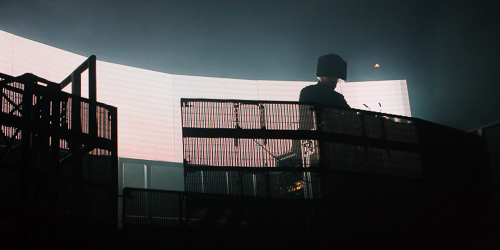 As we get through the main doors, we're hit by a wall of bass. Not the delicate kind that tickles the wax out of your inner ear canals. Heavy bass that packs the punch of a heavyweight boxer to the midriff. We stand towards the back of the venue as The Bug (already part way through their set), deliver atom bomb beats. A quick shouted confab between our group and we decide that we what they're playing is Ragga. Looking them up afterwards, they call it Acid Ragga so I think we did alright with our pigeon holing.

Ordinarily I'm not a big fan of MCs, I find they either detract from good music or attempt to cover up bad music. Either that or they just get on my nerves with poor rhymes and saying nothing of interest. I know that's a couple of sweeping generalisations followed by a grumpy statement but that's how they make me feel. This evenings performance is different. The Bug turntablist Kevin Martin provides the framework of filthy bass rattling the crystal clear Funktion One sound system with raga, dubstep and dark electronic nuttiness. His MCs FlowDan and Daddy Freddy work well together bouncing well-rehearsed meaningful lyrics off each other. Freddy announces Miss Red, another MC, to the crowd and she lends her delicate vocals to the combustion engine bass. The sounds are a odds, they contradict one another and yet they seem so complementary. She's great and it's like a poppy flowering on the metaphorical bomb site.

Freddy signalled their last tune and half way through it, I kind of wished they'd done the cheesy rewind thing, just to prolong the set a little longer. The applause and recognition is loud and well deserved.

The heavy beats and applause are replaced by something at the opposite end of the musical spectrum, far gentler. This must be the billed Algorithm 4051 melt v1.3 that was listed on the door. It's a dreamy electronic soundscape which meanders without really going anywhere. I think it would sound pretty special in headphones but really at a gig like this, it forms the background for conversation.

Squarepusher's acidic sounds are complex, and as he arrives on stage, it's clear that although the venue is far from sold out, his fans are going to make the most of the dancing space. Squarepusher (AKA Tom Jenkinson) settles in behind the mixing desk bathed in blue light and dons a helmet. As he fires up the controls, banks of LEDs sparkle into life around him and dance to the beat in a Tron like fashion. 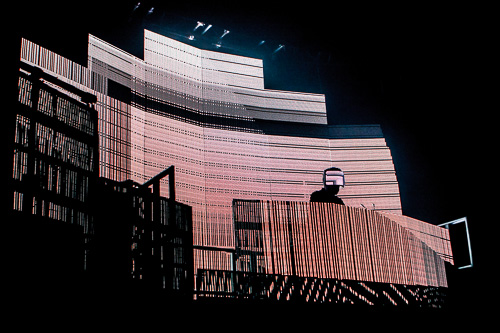 As I said, the music is complex, it's not easy listening. There is a core beat or bass-line in there somewhere (though seldom both), but it doesn't flow the way 'normal' music does. The beats are made in layers which often seem at odds, though given time, the brain sorts it all out and once again the rhythms change and brain starts working. The AV addition of lighting patterns sweeping as a backdrop and across the LED screened helmet adds to the mind melt. I'm afraid there are long periods where my brain gives up. I can see hands working across the mixing desk in blur. His skills are incredible but I'm afraid its all too much at times and my head wanders. As I look around, I take in the crowd. I reckon it's about 90% blokes in the audience. Of those blokes, I reckon at least 50% are sporting beards. No generalisations here  just odd that at a gig, my brain sought out something mundane like that to notice as a sanctuary from the music. The LED bulbs that fire off in the background and they seem like light cannons firing off in a battle against the music.

Towards the end of the set, Squarepusher steps out from behind the desk and picks up his bass guitar. The tunes are more recognisable and the backdrop that has morphed through various different settings throughout the performance is now reacting to the sounds coming from the bass. It's clever stuff, and I leave feeling that it's a bit too clever or disjointed for me. A bit too much going on. The Bug on the other hand have won me over! 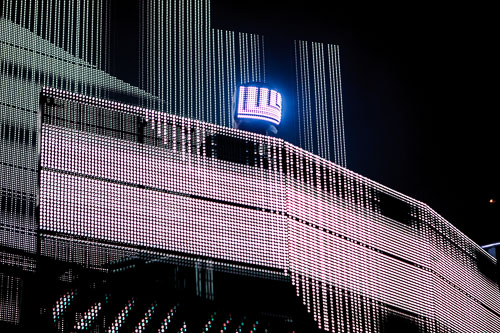