Cathedrals are serene, vaulted, dusty, and a place of quiet reflection, reverent praise and whispered wishes usually. Tonight however Exeter's Cathedral hosts the Levellers as part of their short run of intimate and seated acoustic tour dates taking in six theatres and cathedrals.

There's a long snaking queue outside in the light mizzle, and it takes half an hour for them all to get installed in their seats. Outside the only tout is offering a ticket for free, but in my time waiting to enter the stone building there were no takers. 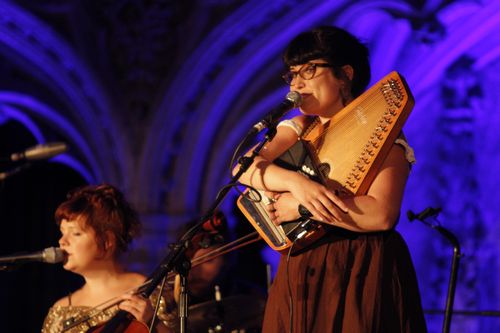 Rising folk act Moulettes are the support act on the raised stage installed before the choir between the 900 year old thick set pillars, and below the ornate cavernous ceilings with their wall hangings washed with coloured spotlights. The band are a bit of a revelation, as they showcase mainly tracks from their most recent album 'The Bear's Revenge' alongside a couple of tracks from their previous albums.

To label this outfit as just prog-folk does them as disservice I feel, as the string heavy quintet utilising violin, cello, autoharp, double bass, and guitar alongside the eye catching basoon, and drums to weave classic Celtic sounding rhythms with vocal harmonies and extol a complex level of musicianship as they weave gypsy, classical, Mediterranean, folk, klesmer, choral, and more into the mix.

It's sophisticated and complex, using silence and space alongside staccato bow slides, and upbeat marching rhythms in one stroke and swelling strings and voices in another, it's a rich tapestry that creates a new and unique musical sound. 'Circle Song' even has a xylophone thrown into the mix, there aren't enough xylophones in folk music.

Their stunning performance makes it hard to gauge whether the audience's (a mix of Levellers fans, and local music heads predominantly over 40) silence is one of amazement or reverence due to our location. The majority of them look like decent church going folk. Bespectacled singer Ruth Skipper alludes to this point telling us they have had to edit their set to cut out much of their material as it's usually full of murder and adultery because of their location. That's before we mention the flashes of her garter, violinist Georgina Leach's skimpy shorts, and the fact there's something seductive about a woman with a cello between her legs (maybe I've seen The Witches of Eastwick too many times).

The almost plainsong 'Songbird' see the three women cellist Hanna Miller, violinist Georgina, and the eccentrically dressed Ruth weave their voices into a contemporary take on the feel of Simon & Garfunkel's finest work, and seconds later their music is also a swirling beat fuelled groove. They conclude with some jaw dropping syncopation with a "Post apocalyptic party soundtrack" a staggering debauched joy! I make it to the merchandise stall before they do, my tenner at the ready, great stuff! No doubt destined to be much lauded at festivals next summer, hot (especially in those glasses) property! 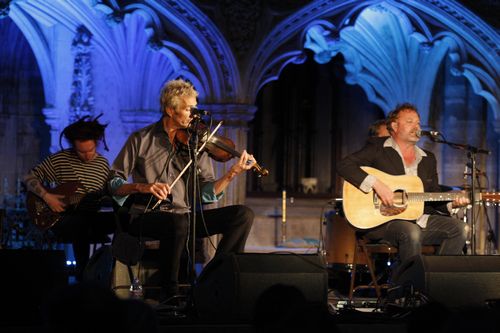 There's a half hour intermission whilst the chairs are set out on stage for the Levellers to present their stripped back songs including a few more reflective numbers. Anybody wanting to do busking should take note - these songs work brilliantly with very little accompaniment and showcase what great lyricsmiths the band are. The group are considered by many locals because they chose the nearby fields to create their Beautiful Days festival (named, of course, after their hit single, What A Beautiful Day) right here in Devon, which sells out every year, and there's a few T-shirts worn proudly by fans of the festival in the audience tonight.

Unfortunately Simon Friend is not able to be with the band tonight as he is taking some time out to care for a family member, and there was no chance of it being a sedate gig where the crowd were just going to sit, and observe and as soon as we're given the okay we're up and dancing.

From the opening track of 'Edge Of The World' which sees Jon Sevink on violin and Matt Savage on keyboards joined by Jeremy Cunningham on bass whilst frontman Mark Chadwick showcases his acoustic guitar skills and reveals, "We're looking forward to ourselves too."

Drummer Charlie Heather also takes to the stage for a heartwarming 'Maid Of The River' and the numbers are bolstered further by a frankly slightly nervous looking Jim Mortimore from Moulettes standing in for Simon on banjo for 'Far From Home' and we realise we can sing along without upsetting the crowd around us. 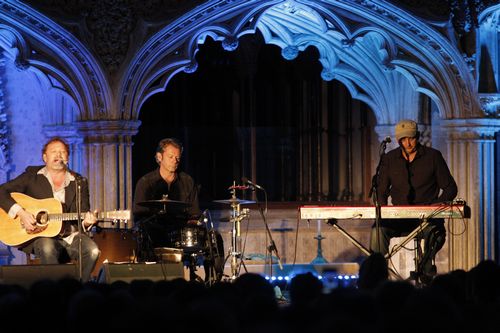 Seat dancing is the best we can do with Mark telling us to we might be able to dance later. Rare gems 'Traveller' and 'Chemically Free' showcase the musicianship and the singing at times Mark's voice is richer than Neil Diamond's (I'm not kidding).

Fan's favourite 'Julie' is delivered by just Mark and Jon and 'Forgotten Towns' from their terrific new album 'Static On The Airwaves is stripped right back. The mix of well known numbers like 'The Road' and new stuff 'Truth Is' soon means we're not just singing along, but itching to dance. Mark says we have permission to dance and 'What A Beautiful Day' has most out of their seats and moving, no longer restricted to "Chair dancing." We're warned "There may be casualties" as they hit gold with 'Carry Me', 'Dirty Davey', and 'Burford Stomp', and we're asked to think of Simon "looking after a poorly person" as his 'The Riverflow' ends their well paced set.

They've had us in thrall we can't believe it's gone so fast, and the pubs are still open. But wait, the calls of "More" are hushed as Stephen Boakes starts up his didgeridoo which in a space this size sounds amazing with the well worn ancient stone flagstones reverberate the rhythms up through our legs. The amazing cacophony eventually becomes the anthemic 'One Way Of Life' and the encore continues with Jon taking on kazoo duties (alongside fiddle) for 'Just The One' as Mark too points out the pubs are still open.

It just leaves the personnel of Moulettes to join them upon the stage for a rabble-rousing classic folk sing-along from the new album, the final number 'The Recruiting Sergeant' the band's own take on the traditional rebel song made famous by The Pogues. It's a terrific end to a memorable night where one of the UK's most undervalued band's has aired some thumpingly good classic well wrought tunes tonight. 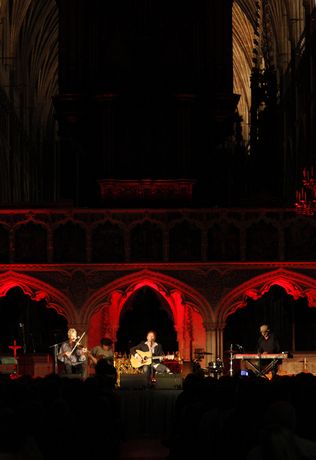