Fresh from bring the sun out at Download last weekend, this weekend a rainy Salford plays host to Soundgarden's vocalist Chris Cornell. 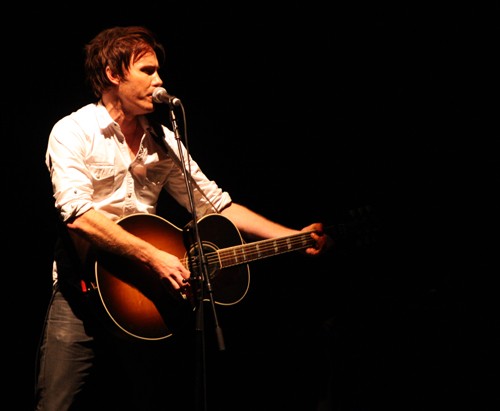 Warming up the show is Paul Freeman, a man who seems incredibly comfortable in front of this sell out crowd. His powerful voice and dual guitar and harmonica are spot on. 'Blind Man Blues' (written in a dressing room in St. Lewis waiting to support Roger Daltrey) is a catchy pumping guitar track. This is toned back down again with a sad song about divorce. He is joined by Georgia Herd for an excellent stripped (even further back) cover of The National's 'Bloodbuzz Ohio'.

This venue is lovely. Comfy seats with loads of leg room, large stage, three tiers, it's just a really nice place for this sort of show. Of course the gig itself has to be good to make this a perfect show, and of course it is if Chris Cornell has anything to do with it...

The Soundgarden / Audioslave / soloist / Bond Theme songwriter takes to the stage in a cardigan and starts waving to the crowd. I and probably many others have never really heard him speak to a crowd, just sing at them, so for him to explain about his actual voice when not singing or screaming was a relief! The Peter Pan of grunge then gets straight to it with a solid collection of songs from his huge back catalogue. 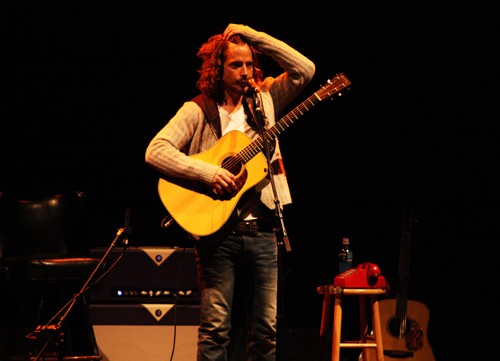 It all starts with a request for the main Bond Theme Cornell wrote for Casino Royal, 'You Know My Name'. For those present who are only Soundgarden fans they may well be disappointed, as this is not a Soundgarden acoustic night. It is a collection of the best bits of Chris's musical history, plus some marvellous covers thrown in for good measure. Tom Wait's 'House Where Nobody Lives', 'Billie Jean' by Michael Jackson, 'Thank You' by Led Zeppelin, 'A Day In The life' by The Beatles and John Lennon's 'Imagine' all take place on this stage, some haunting, some re-worked but all with the Cornell touch. On a table on the stage is a red telephone... nothing to do with Batman but a gift to Cornell from Jeff Buckleys mum. He never mentions it and it never rings but it still takes pride of place as it should.

Chris puts the guitar down for a couple of songs, one to sing along to a record playing featuring the piano only version of his song 'When I'm Down'. The piano recording was performed by the now sadly deceased Natasha Shneider. Chris then switched the record ("Once you start..." he jokes about the records), and sings along with his guitar to the guitar and drums parts of 'Scream'. A nice break up from the solo guitar style of the night, and a sweet nod to lost friends.

The two hour set includes many songs from not only Chris' solo albums like 'Euphoria Morning', but his time spent with Audioslave and Temple Of The Dog. Unfortunately there is no 'Call Me A Dog' like what appears on the live release supporting this tour 'Songbook', a great purchase), but we get 'Wooden Jesus' and a huge cheer for 'Hunger Strike'. Half of me thought Eddie Vedder would turn up and provide baritone second vocals on the track (as Pearl Jam are playing in Manchester this week) but sadly he did not. Will it happen on Wednesday at their show? All fingers are crossed...

A guy called James has a banner asking to play guitar with Chris on stage. Chris is in a playful mood and allows the guy up to accompany him on 'Doesn't Remind Me' and 'Fell On Black Days'. There are a few glitches with the sound as they weren't expecting it but James did great job of playing along (and plugging his band Blind Thieves).

Cornell gives a bit of a grunge ending to his long main set by strumming the guitar erratically with flashing red lights at the end of 'Blow Up The Outside World', using sampling to overlay guitar tracks and vocals. 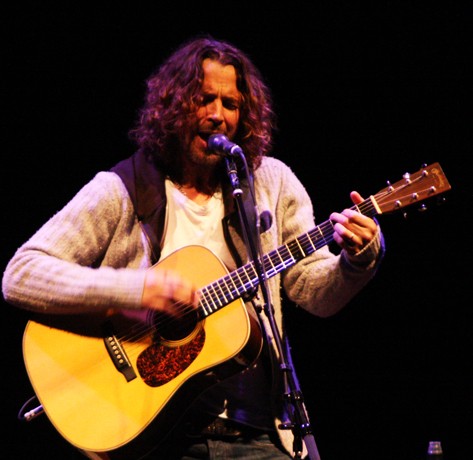 Chris also takes a photo of a couple from near the front, with all the crowd in the frame, who he makes stand up for the encore, as many have started to give him a standing ovation anyway at that point.

Stand out tracks for me were 'Hunger Strike', 'Fell On Black Days', 'Seasons' from the 'Singles' soundtrack, 'Can't Change Me' and 'Mind Riot', a Soundgarden song that has not been played by the band since 1994. Chris' vocal range is as expansive as ever, his guitar skills are top notch, his hair has grown back into its shaggy grunge style and it feels like an intimate return to the nineties for many. A great show of mind blowing tunes by a true modern day musical legend. 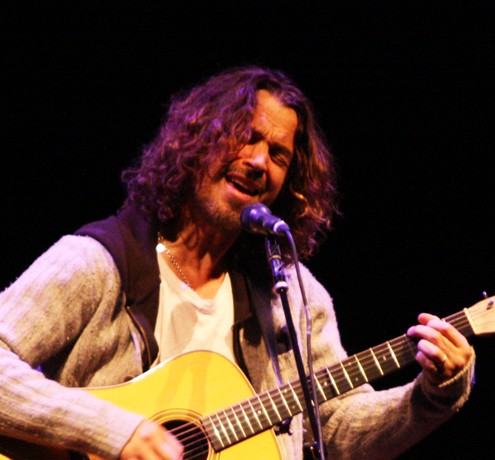