Ozric Tentacles first came together at Stonehenge Free Festival in 1983 and have gone on to become the world's foremost trance, psychedelic, techno, cosmic rock band. 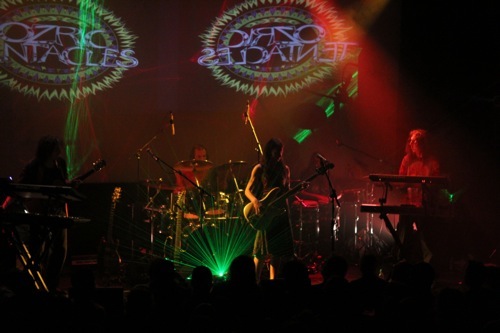 Spawning such spin offs as Eat Static and Transglobal Underground, creating a new genre of trance/dub based dance music popular through out the 80's and 90's festival scene.

The event presented by Future Sound of Exeter in aid of Phonic FM was to be kicked off with the support band Champignon, fronted by Ozric's own ex flautist 'Bouncing' Jon, but unfortunately they had to cancel, so the Tentacles came on early and played for a full three hours. Originally from Somerset, but now living in America, they melded comfortably into the home scene. I've not seen so much hair everywhere, on and off stage, since Glastonbury '85.

My Ozric journey started in 1990 with 'Erpland' and in all the years I've listened to them I hadn't noticed quite how much the melodies are provided by the bass. Their deep rumbling bass melodies are the hub around which the fast trance beats and sonic kaleidoscope turn.

It was very much a family affair, with founding member Ed Wynne on guitars (electric and acoustic), keys and synths, his son Silas Wynne on keys and synths and his wife Brandi Wynne on bass. Whilst Ollie Seagle, on drums, kept the beat fast and trance inducing for the entire three hours. Brandi's rumbling melodies and Seagle's fast paced trance beats provided the perfect canvas for the guitar and synths to paint sonic mindscapes lifting the audience into a cosmic journey. 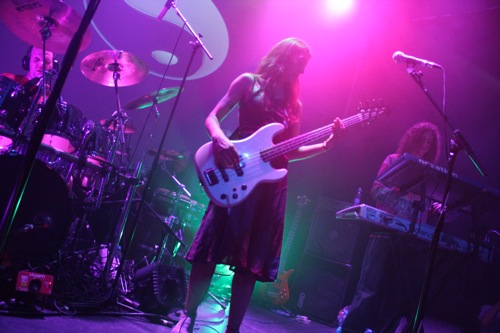 Provided by their own team, the sound was huge, crisp and clear. Some of the bass notes were real heart tones, it was nice to have the sound hit you in the chest for a change rather than the head. It's been a long time since I've felt that rumble come up through the floor and explode in your heart space, which only comes with well mastered sound. This band are incredibly tight, not missing a single beat or note, and yet free floating as they played close attention to each other allowing them to jam around some of their most well known tunes.

Again provided by their own very professional team, the light show was fantastic. Allowing you to drift away from the musicians and sink into the audio-visual dream creations that are the Ozric Tentacles.

This was a bright and colourful gig from beginning to end, musically, visually and sonically. One of the tightest most professional performances I've experienced to date. So if you get a chance to catch them on their current tour, promoting their newest album 'Paper Monkeys', and this is your kind of music, I would highly recommend it. 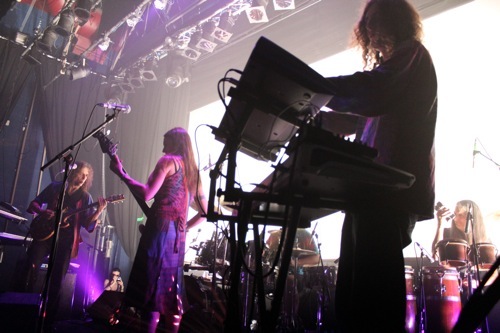