Last night a 100 mile jaunt to Leicester was in order, gay icon (can we call her that!) Heather Peace was in town (Leicester) to showcase songs that would formulate her track listing for 'Fairytales', her debut album (first one produced in a studio, with Nigel Wright).

An intimate setting of the 'Y' Leicester was the venue, once you've found your way through the maze of one way systems that are Leicester's town centre you can find the venue. Lovely, welcoming staff and a fabulous, intimate place setting for an acoustic spectacular. 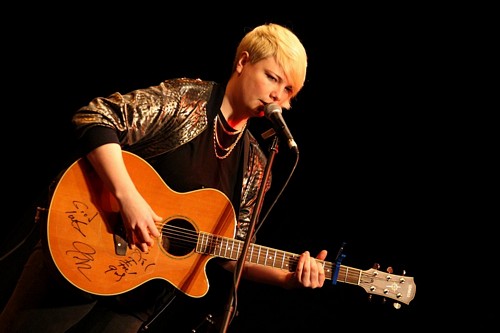 Lots of familiar faces who I'd seen before who have now become part of the Heather Peace fan club, following her around the country from gig to gig, spending all their hard earned money just to catch a glimpse of that gorgeous smile (If it is blinding cause her teeth are so white!).

The ever faithful took up the first few rows, seems quite funny that HP (Heather Peace knows them all on first name terms and refers to some of them throughout the show). The show tonight was an acoustic performance, the ever famous HP Gretsch was in hospital having some repairs done (Tuning).

But first Irish singer Kal Lavelle hit us in-between the eyes with her gutsy acoustic performance. Dressed in black shoes, tight jeans, T-shirt and glitzy jacket, we were treated to a 30 min set which included 'Shiver', which is an absolute stonker, a song which she'd written after 'Breakfast at Tiffany's' had inspired her and one of the best covers I've ever heard 'Crazy', Christ, she blew my ears off. I loved her passion and interaction with the crowd, no wonder man of the moment Ed Sheeran had her along as support for one of his tours last year, the man surely has taste. 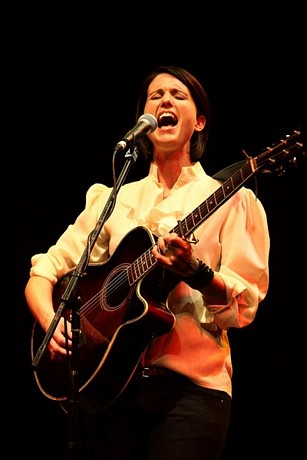 What a difference a year can make. Twelve/eighteen months ago, Heather Peace was performing her songs to just a few people in her local pub in Brighton. Word spread like wildfire through social networks, that the "Hot Cop" from Lip Service was doing something magical on stage, word spread, and the ever faithful just keep turning up like metal to a magnet.

'Fairytales' looks set for a spring release with a tour anticipated from May onwards. Tonight was the first show of two to showcase the track listing for the new album.

HP got rapturous applause from the ever faithful, dressed in her trademark skinny jeans (she must spend an hour in a bath pre-show to get them on!), brogues and ruffled white blouse, she said she'd come as "Prince Charming", I could see the crowds faces light up, it doesn't matter what this women does she can't do no wrong in their eyes. They lapped up every breath, every word, every note, every laugh, every glance, it was amazeballs to watch.

With just a keyboard and acoustic guitar for company on stage, no glitzy back drop or fancy fireworks or dancers (Could you imagine lol), just a women doin' her thang on stage.

We were treated to a 15 song set, 90 mins of banter, Q+A's with music and a track listing thrown in for good measure.

First few songs were played on the Piano/Keyboard. 'Thank You for You', 'Harmony', and a cover of the ever famous Snow Patrol's 'Run', which Ms Peace has made her own with her original version. Apparently because Leona Lewis belts it out in order to do the song justice this is what Ms Peace does. 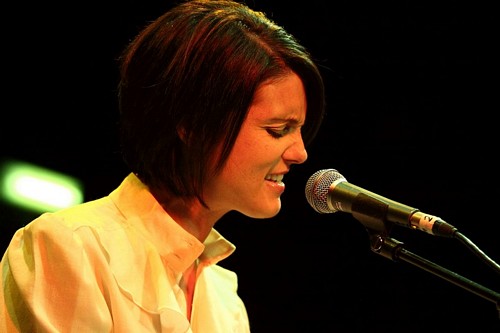 Beautiful song 'My Way Only', made the hairs stand up on the back of my neck., Next up HP on guitar 'Fight For', 'Sabotage', a cover of Bonnie Raitt's 'Can't Make You Love Me', I remember hearing this song in the early HP touring days. Another cracker, 'Familiar Creature'. Between each song we were treated to an impromptu Question and Answer session as well as the usually HP banter you expect from one her shows.

Questions about what does she dream of? The answer may be owning a production company of her own, maybe writing for new other people and searching for new talent. She asked the audienc who had travelled the furthest, shout outs from people coming as far afield as Newcastle, Yorkshire, Scarborough, then one little voice shouted "China". HP replied "You're having a laugh", the little voice said "Yeah, China, I'm Chinese", everyone roared with laughter, the she promptly asked HP to marry her, to which HP said "I'm already promised to someone else", promptly showing off her bling (engagement ring).

Don't ever ask HP about She-wees as she has an hilarious story!! (Too much information, about peeing like a bloke).

Other questions when was Lip Service Season 2 coming on to our screens, according to HP, write Harriet Braun had intimated that it may be on in April, but this was all guess work. 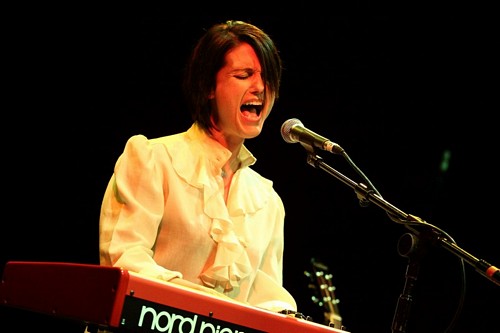 I do like HP's honesty, her fabulous sense of humour and how she's down to earth with her feet firmly set on terrafirma to get amongst the fans and get to know them, it's a breath of fresh air in todays music business.

'Never Been A Girl Like You', Apparently HP has suggested she may run a competition to compose a limerick for the verse of 'Never Been' she said it would be quite funny to see what fans came up with, she would sing some of the verses in some of her live shows, what an incentive that is!

Last few songs to round off the performance, 'Your for Keeps' Ellie Goulding's classic 'Starry Eyes', which I had ringing in my head all the way home and when I got up next morning, 'Lost', 'Make Me Pay' and Title track 'Fairytales'. The audience went mental, cheers, claps and screams, and HP was off. They all sat in their seats shouting "we want more", 2 minutes later she reappeared. I must admit we needed the loo so we slipped away quietly before the encore. We did hear HP's dulcet tones with 'Bigger Than You', so the last song is a surprise.

As well as being a talented actress (London's Burning, The Chase, Emmerdale, The Bill, Lip Service and Waterloo Road (7th March)) this women's talents knows no bounds. Her album will be a success and I guess the girl from Bradford will have achieved at least one of her dreams and made sure that it's not just a fairytale.