Finally, a big band play Wakefield! Yes we spawned The Cribs and many other local bands that in underground terms are well known in different genres (Milloy, Pylon, Chopper, Black Lace!) but tonight we have the one and only Hayseed Dixie travelling the swamp to bring some bluegrass covers and original music to our little city. 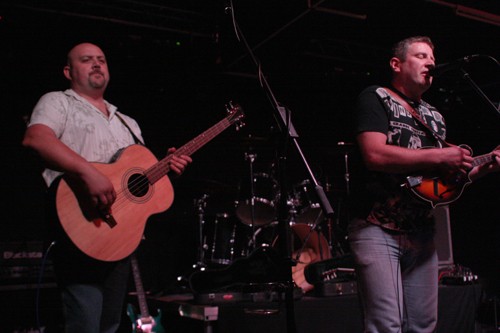 The Howard Brothers Start with a bluegrass version of The Clash's 'I Fought The Law', perfect music to warm up for tonight's country music party. People have turned up in dungarees and checked shirts and bandanas for the occasion, and the odd line dancing move creeps out! The band perform a few covers including 'Waterfall' by the Stone Roses, plus a couple of original tunes. They are not on for very long, probably around 20 minutes. The next band are more suited to Black Flag's usual genre heavy metal Lockin play thrash metal, far from the country sound but close to the metal lyrics that Dixie cover. You can tell by the amount of fans walking around in Lockin t shirts that these guys are good. A few of the older crowd members don't look too thrilled but the younger ones love it! 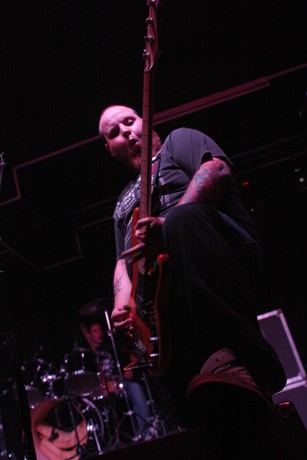 These Castleford crushers with songs like 'These 2 Skulls', 'Own Worst Enemy' and 'Never Give Away' give an inkling of the force of this trio. The drumming is tight as, with the vocals reminiscent of James Hatfield. A nice break from the bluegrass, but that is what people are here for

Hayseed Dixie have been hanging around the venue, and now they take to the stage, beers in hand, and straight into 'Breaking The Law' originally by Judas Priest. Then it's time for an original track by the band, because yes they do have a few of their own! 'Kirby Hill' is a catchy foot stomper of an original tune. Then it's time for a cover by the band that started it all for these Appalachia dwellers, 'Shook Me All Night Long' by AC/DC. 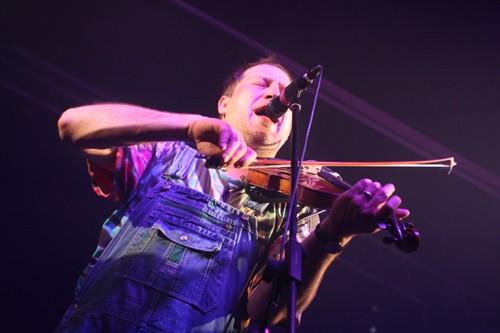 Between songs there is time for banter, mainly from vocalist Barley Scotch (or John Wheeler to his mum), about how many beers the band drink. "We've been a band for ten years. We do around 150 shows a year, get 50 beers on the rider, that's around 7500 beers, over ten years that's 75000 beers you build up a tolerance but you have to keep up the pace!"

The hits are the ones that get the crowd going, like Aerosmith's 'Walk This Way', Motorhead's 'Ace Of Spades', Creedance Clearwater Revival's 'Bad Moon Rising'. It's Queen's 'Bohemian Rhapsody' that gains a lot of laughs, yeah it's been sang many a time before but not in a rockgrass way! The brothers "Reverend" Don Wayne and "Deacon" Dale Reno at one point play the same banjo at once, with Dale making the notes on the fret board and Don Wayne strumming away, fast as you like. They use the three finger single string technique invented by their father Don Reno (a well respected bluegrass musician from Red Smiley) to play the banjo in a unique way. Bassist Jake "Bakesnake" Byers really holds all the sound together, and has a great bushy beard well suited to the sound! 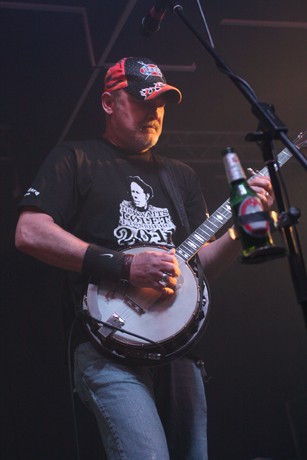 The highlight for me is the classic Hayseed Dixie song 'Poop In A Jar', about a lost love, and the cover of Green Day's 'Holiday'. The band disappear before the encore, whereas Scotch says "They need to pee. I don't pee as I sweat too much." He then performs a solo song that many in the crowd know, but I can only hear "Eat Some Rifles" sorry I have no idea; apparently it was a hit over here and not in the US. (It's The Jam's 'Eton Rifles' - Ed) 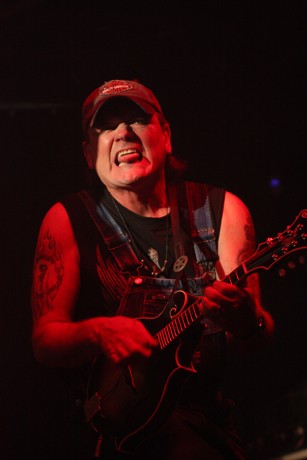