The Picturedrome, Holmfirth on Thu 5th May 2011

Not something I normally shout about but this is one of the only gigs where the support act has been my reason for coming to a show. Having caught a tiny piece of this guy at Strummercamp last year, I had to check out his amazing guitar skills again. What better opportunity than with this tour with folk superstars Show of Hands. This show is the first of a weekend of shows in the home of Last of the Summer Wine for the Holmfirth Folk Festival. 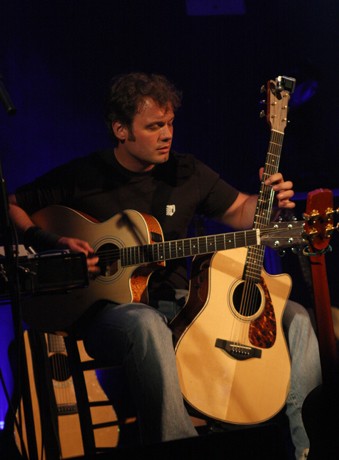 Rodney Branigan is an instantly likeable fellow. Grinning from ear to ear as he enters the stage after a warm introduction from Steve Knightley, he straight away performs the ultimate party trick to which he has gained many a fan playing two guitars at once. With one held in the normal way and slightly raised at the neck end, and the other nearly upright on the floor, the jolly Texan astounds the crowd (many who have seen him before when he toured with the same band).

We only get one song with this unusually unqiue playing style though, as Rodney uses this set to show us more of his songwriting side. Plus more guitar slapping and other things to amaze (he has misplaced a tambourine that he was going to play with his foot!) 'Stop The Rain' came about after the torrential downpour at Glastonbury 2007 (and the much needed rain is here tonight, not so needed though for the Folk Fest this weekend).

Branigan shows us his homemade foot stomper box made from a cigar box, filled with wires, and explains how he was heavily questioned at Mumbai airport over the 'suspicious' item! There is a funky step to the left with 'The Plagiarism Song', followed by a song where the guitar is used more as a bongo than a stringed instrument (jokingly the song is about spanking children), including a snippet of The Beatles' 'Come Together'. Then it's a cover Radiohead's 'Creep' to end the show, and prove further what a talented singer Rodney also is. His voice can go from sounding similar to Jose Gonzales sweet tones to Luke Concannon's funky soul crooning. One of the best shows I have witnessed in a long time from a solo artist.

After all that excitement I am not sure what the main band are gonna offer me. I am only just picking up on the folk genre, having entered it mainly through young stars like Seth Lakeman, Willy Mason and Kate Rusby. I am really impressed by Show of Hands though. Not only are the three of them (Steve Knightley, Phil Beer and Miranda Skyes) extremely talented musicians (Beer especially showing a huge range of skills on many a stringed instrument) they are a likeable and down to earth bunch. Add to that many a comedy line mainly from Knightley and you have a great folk roots performance. 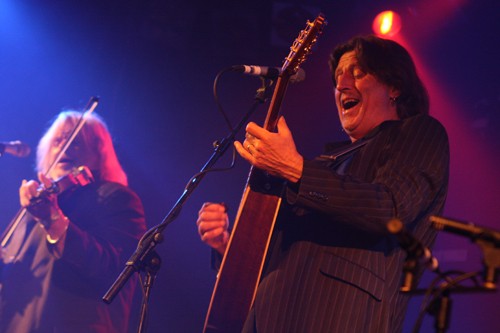 You can see why they have won so many awards; beautiful layered sounds that if you close your eyes you would swear there were six people on stage and not just three, plus hard hitting lyrics of declining life in the country ('Countrylife') and rip off bankers ('Arrogance, Ignorance and Greed') with the excellent lyrical line "youre on your yachts / we're on our knees" still relevant today as it was when written two years ago. "Who would have thought it was still relevant?" states Knightley.

The most recent release from the band is 'Covers 2', and tonight we get to hear my favourite two songs from the album, 'Youngstown' originally by Bruce Springsteen and 'Boys of Summer' by Don Henley. The latter is a stripped down version of the electronic original, and causes a mass crowd sing a long. At one point there is nearly a little bit more Springsteen with 'Dancing In The Dark' slipping out until Knightley says "No, he doesn't cover any of ours!".

Miranda is left to swap the double bass she plays so brilliantly for a guitar to perform alone one of Knightley's songs 'Don't Be A Stranger', showing her beautiful strong voice in the process. Knightley's voice needs no introduction, the low tones perfectly suited to telling stories old of rural and urban tales, shining mostly in the accapella start of 'The Galway Farmer'. He encourages the crowd a lot to join in by giving us the words just before he sings them, but many here don't need reminding of them, SOH trained as they are.

I really enjoyed this show, the comedy banter in between the songs felt like it was more involving for the crowd, and the trio are a truly amazing band. I will be catching both these musical greats in a field at Glastonbury this year.

Is there anything left in England that's not for sale?
Are We Alright?
Stop Copying Me
Youngstown
Arrogance Ignorance and Greed
Santiago
Don't Be A Stranger
Señor (Tales of Yankee Power)
We're All In It Together
Countrylife
Boys Of Summer
The Galway Farmer
Cousin Jack
Sea Shanty

Come Back To Me 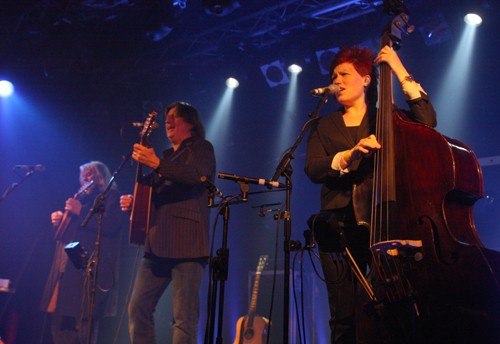