If you're not familiar with Heather Peace, shame on you!

She's an actresses and singer/songwriter to boot. In fact, talent oozes out of every pore. Since playing a major role in Lip Service and headlining a small acoustic tour in every nook and cranny of the UK, she's built up quite an impressive fan base.

Last time it was quite a small affair, with Peace on guitar crooning in tiny venues, sometimes only big enough for a capacity crowd of 60. As soon as she announced this "big band tour" in larger venues (consisting of Heather Peace, accomplished percussionist Lisa Tring and the Scottish songbird Jill Jackson, from Speedway fame) the tickets still sold out like hot cross buns at Easter. Prior to last night's performance at The Glee in Birmingham, this tour hasn't been the easiest for Ms Peace. She got stranded alone in Ireland whilst her crew and band were stuck in Scotland, unable to travel due to awful weather conditions. Then there's the subject of a sore throat and a cold and having to rest one's voice for two days and delay one of the dates of the tour until May the 2nd. Like a trooper Ms Peace soldiered on at Bristol and then on to The Glee last night.

Queuing (yes the British love queuing) started as early as five o'clock for ardent fans eager to grab a space on the front row at this all seated, civilised venue. Its probably one of the best venues I've ever had the opportunity to see a gig at. The staff are jolly and very helpful too, which makes a welcome change.

We took our seats and the venue was packed to capacity, apparently "sold out". Although Heather and Jill have a vast contingent of Lesbian fans there's always a token man in the audience, I actually spotted two last night!

The best thing about The Glee Club is it's so intimate that people didn't dare speak. There had been banter on Twitter and Facebook prior to the show (not just this show) for everyone to respect the artists and quit chatting. There's nothing worse than singing your heart out whilst the entire audience is gassing. Fortunately there was no hope of that at The Glee as you're so close to the artists that the music can take centre stage. 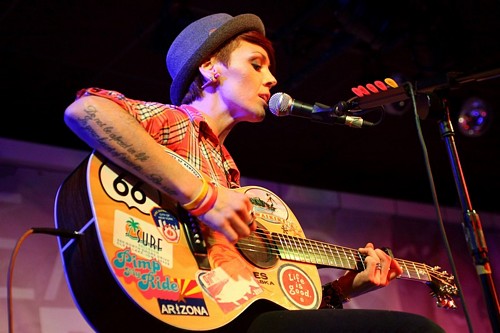 Support act for the night was the impressive Jill Jackson. Jackson is so underrated as an artist, Her current album 'Back to Zero' is like a Phoenix rising out of the ashes, with such gems as 'Long Way Round', 'Grasshopper' and 'Forgive Me'; that would make an excellent addition to any record collection.

The six song set totally blew me away. She has a voice like an angel that's pitch perfect. My other half was totally agog for every song and proceeded to buy every format of Jill's material at the merchandise stand. I rubbed my hands with glee (like the pun?)!

Jackson kicked the set off with 'Long Way Round', and I lingered on every word of the lyrics. 'A Song For John' was up next. 'Need You Now' and 'Wanted' filled the venue with melodic, mesmerising sound. The banter between tunes was fun and showed that Jackson does actually have a personality and isn't full of herself like some artists. The thing that struck me most last night was what a snazzy dresser she is, with highly polished brown brogues and the coolest Batman socks. She has so many hats she'd put Olly Murs to shame!

After 'Over and Done' Jill encouraged the crowd to join in with the next number 'Karma Chameleon' by Culture Club. Even I had a little warble, bloody brilliant. I was totally gutted the set was so short, but ecstatic that I'd got the opportunity to see Jill live.

Everyone was waiting with baited breath to see headline act Heather Peace. You could feel the tension and as soon as the lights went down the venue went deadly quiet. 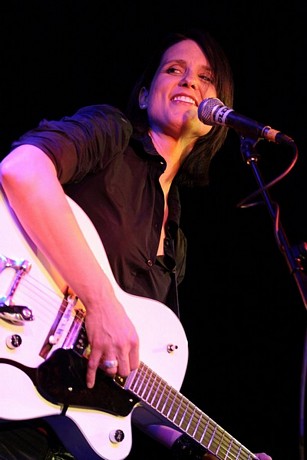 Peace came on stage at 9ish to rapturous applause, the gleaming Colgate smile and grin like a Cheshire cat highlighted how happy she was. All I could think was - "My God! how tight are those leather trousers?". She must have bought shares in Johnson's talcum powder or Vaseline to get those on; they can't have been comfy at all!

Peace's first song of the 15 song performance was 'Thank God For You', where she proved she was totally at home on her piano as well as her trademark White Gretsh that she flitted in-between throughout the night. She was joined on stage by Jackson and Tring for the rest of the set, where they played straight into 'Aint No Sunshine', to wolf whistles and a bit of friendly banter from the crowd.

It was apparent from then on that the band has become tight and the chemistry between the three of them was astounding, even giving each other grief if any of them made a mistake. The Peace/Jackson debate about County vs Jazz was hilarious and the audience lapped it up and joined in with the laughter.

'Never Been A Girl Like You', 'I Will Make A wish', and a cover of Snow Patrol's 'Run' left me with goose pimples. Then it was onto 'It's All About Love' and a tribute to Michael Jackson who Peace notes as one of her musical influences.

They gave a cracking rendition of Jackson's 'Human Nature' with Tring on the beat box accompanying Peace and Jackson on the guitars.

What can only be described as the best song of the night, (that Peace dedicated to all her ex-girlfriends) was 'Better Than You'. It was amazing and showed Peace's vocal ability and why she's amassed such a female following. They absolute adore her and linger on every single word.

As Peace has been busy writing, she used last night as a platform to show off her new wares: 'My Way Only', 'Harmony' and 'You're For Keeps', were absolute stonkers, and if this is the calibre of Peace's new material, well we're in for an absolute treat when the new album is released in the new year. I can't wait.

The last new song was collaboration between Peace and Jackson called 'Sabotage'. I totally loved it and the audience were in agreement. Jackson and Peace complement each other so much that it's hard to comprehend how such chemistry has built up between two artists in such a small space of time. Last song of the set was an Usher classic 'DJ's Got Us Falling In Love', the audience lapped it up totally. Peace hinted there would be an encore. Minutes later Jackson and Peace came on stage and illustrated clearly that they had saved the best for last. 'Forgive Me', a Jill Jackson classic, was up next. Peace and Jackson on vocals and Jackson on guitar. This song was amazing. It highlighted how astounding Jackson's voice is and how much Jackson's and Peace's voices are a total match made in heaven.

Closing the show with a stonking Rhianna megamix of 'Te Amo' (for Mi Amor) and 'Only Girl In The World', it's a wonder the piano didn't set on fire!! The audience were on their feet and it was well deserved. If this is what we can expect from Peace and Jackson, bring it on.

The thing I love about both artists is they don't follow the 'Ego' has landed trademark like some stars, who are so far up their own backsides they don't give a fig about their fans. Peace and Jackson both break that mould and make an effort to meet and greet fans at every show. Good on 'em I say. 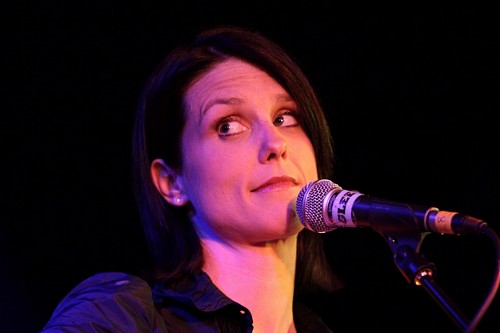