Underworld return to the UK following months of touring to promote 'Barking', their latest studio release. Tonight's Brixton gig is not quite sold out and as we arrive at 8:30, the venue is nearly empty. This is when we discover that Underworld are not due on stage until midnight! A quick call to the babysitter (very rock n' roll), and we join the masses in sitting expectantly on the sticky Academy floor.

Appleblim spins platters to warm up the sparse crowd. The Academy could do with warming up too  it's freezing! As the venue fills out, the beats get harder and Appleblim plays some great techno, dripping in squelch. As we near the end of his first set, the techno becomes more minimal and glitchy.

Synth duo Silver Columns then take to the stage. The electro drum beats pound loudly through the PA and a screechy voice rattles around the Academy. The vocal similarities to Jimmy Somerville are uncanny and there's also more than a passing resemblance to Hot Chip on the musical direction.

Their sound desk, festooned in sparkling silvery white dancing lights pumps out tunes with an 80's feel, but technologically enhanced. Drums and bass rumble but all other sounds seem too loud and are lost in a mêlée. Moving around doesn't untangle the spaghetti sound waves and as they leave the stage, I'm still wondering what that was all about.

Appleblim return to keep the crowd on their feet and the set gets darker. More techno leads into dubstep with some rib itching bass. A few test fires of the dry ice cannon keep us on our toes as we wait expectantly for our evening's hosts to put in an appearance. 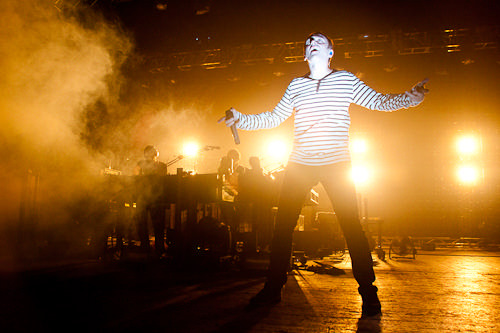 Underworld take to the stage and the welcome is huge. Even in my unaltered state, the buzz of the place is electric: the energy all-enveloping. As always there's the rush of a persistent few who must stand at the front at all costs, but even their pushing and barging isn't going to dampen the spirits of this one as they dive straight into the deep end with the frantic 'Downpipe'. The fast marching bassline gains our immediate focus with the pixelated backdrops dancing in blue and orange. The breakdown stripping the tune back to a keyboard hook and Karl Hyde's lyrics 'Making Us Shake' and it's a hairs on the back of the neck standing up moment.

Straight into 'Always Loved A Film', the rhythm built from Karl repeating "the rhythm, the rhythm, the rhythm" over and over until the uplifting "Can you feel it?" lyrics lift the mood. The words come from the old school rave days but the underlying melody is new and fresh. Punchy and quick, heartfelt but clever and experienced, this tune isnt a bull in a china shop. It's thoughts escaping from pondering heads into eager ears, lapping it up and craving more. This is the latest Underworld single and its reception is fantastic.

As the track fades away, the tribal beats of 'Nu Dark Train' kick in and the crowd's energy levels seem to surge once again. The bass seems relentless and we all lap it up greedily. Although there were a few UK festival appearances over the summer, this is our first Underworld gig for a year and the sounds, lights, and vibe have engaged the crowd into a mass, sprawling in a messed up unison. 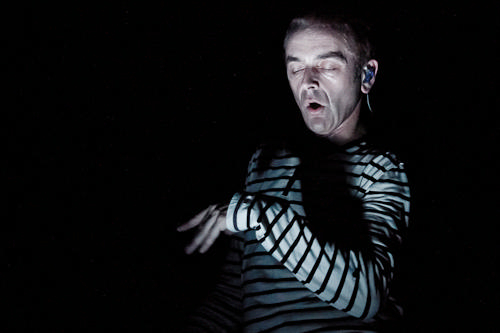 Mourning the end of an epic tune turns into celebration of the beginning of something heavenly. The opening of '2 Months Off' echoes around the theatre. The lyrics "You bring light in" barked out by Hyde as memories turn to friends who love this tune but can't be with us tonight.

The bizarre lyrics and broken beats of 'Scribble' seem to galvanise the throng into one of the evenings real high points.

Darkness falls and my biggest buzz of the evening is a backlit Karl Hyde dancing madly behind a white screen to the mixed up beats of 'Cowgirl/ Rez'. Arms pumping and legs stomping we're all raving and bathed in the yellow searchlights.

The baseline of 'King of Snake', reminiscent of Donna Summer's 'I Feel Love' increases the sway. It's like a change in gear and it's fantastic to hear the older tunes accepted with the new. 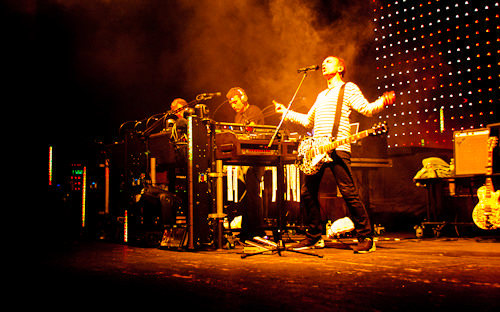 Naturally, 'Born Slippy' gets an outing. I guess it's a fixture in the Underworld set list and it is well received (almost as if some have come only to hear it played). The remixed version of Born Slippy Nuxx's inclusion in the film Trainspotting is what really shot Underwold into the public eye. Pints held aloft with a chorus of "Lager Lager Lager" take us back to the mid 90's.

Darren Price is part of the Underworld Live fixture, assisting Rick Smith in mixing the effects in and out. Strips of dangling paper are ripped off the desk and placed to guide which of the track specific controls are in use for each tune.

As the team of three leave the stage, we're all exercising our vocal chords to invite them back out to entertain us a little more (or a lot more if we have our way).

A short interlude and Karl comes back out to tell us he feels dirty. 'Dirty Epic' is an older Underworld track from the 'DubNoBassWithMyHeadMan' album. I haven't heard it played live for a good many years and its inclusion in tonight's set is a rare treat but the best is yet to come. 'Moaner' is a wall of sound and barrage of strobes and white light. Hyde's arms pumping in time with the drums and a before we know it, it's all over. They come to the front and take a bow looking like they've given their all.

There has been no 'Pearls Girl' but the tempo of the night has bee frantic from start to finish. Another great Underworld night is over and we have to keep our fingers crossed for festival performances to take us through the dark winter months. 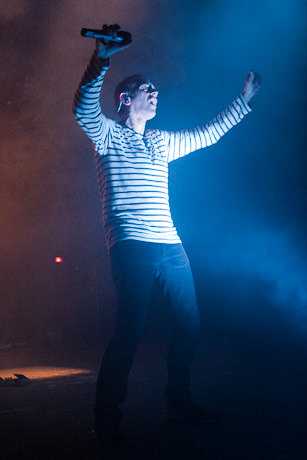