Approaching the Duchess in York we see that the road is closed, much to our dismay, as workmen line the place with tar. And there's little sign of the usual high number of Levellers fans wearing Levellers gear near the venue. Is the gig on we wonder? Of course it is everyone has had the sense to retreat indoors on this freezing November night.

With sticky tar on our shoes from running naughtily through the ongoing roadworks, we enter the Duchess (above Fibbers) to see all our Levellers fan friends. Thomas White, minus all the face garb and headgear he donned at Beautiful Days this year, plays a few solo tracks, of which we catch the very end of one, I think called 'Only Heaven Knows'. The crowd lapped up this ex member of Electric Soft Parade and Brakes from the applause he got.

This is a tiny venue for the Levellers, who have been busy this year with the festival as always and another tour earlier on, plus the 'Levelling the Land Tour' next Spring with the Wonderstuff.

The stage doesn't look big enough for them (especially when Jez starts spinning around!). If you are not in the first two rows you can kiss goodbye to a view; I luckily managed to cram down the side for a few songs but after this the low ceilings and sold out crowd meant the night just turned into dancing at the back! The same lady is up high in the middle of the crowd religiously dancing along (as at every other show I ever see!); though she seems a little lower than usual and just on one persons shoulders and not the usual two (due to the possibility of a head injury I would imagine). 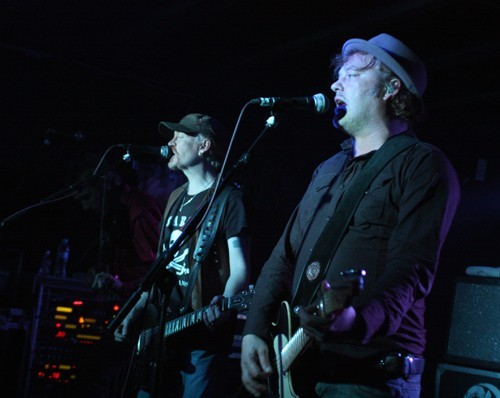 So reduced to dancing at the back we cannot see the fabulous moustaches that the band are growing for Movember, the charity event to raise money for prostate cancer research that the warm hearted band are taking part in. Neither can we see Stephen Boakes do a Clarke Kent / Superman and turn from merch stand guy to didgeridoo player extraordinaire and back again, face painted and furred up then back to normal at the speed of light! Though we can just see his UV musical wand above the crowd at one point

As with the 'Levelling the Land Tour' next year there are not many tunes played from that album apart from crowd favourites 'One Way' and 'Riverflow', both making this intimate crowd dance (we become part of a swinging how down at the back without even knowing it!). The set list is similar to the one played earlier this year and at Beautiful Days I believe (though the torrential rain during that set makes it hard to remember all of it). 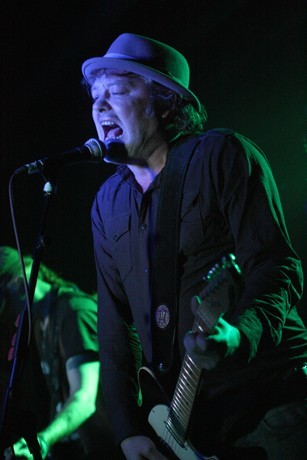 'Life Less Ordinary' and 'Burn America Burn' get the crowd in the mood early, 'Carry Me' gets the crowd even more merry and by the time 'Beautiful Day' ends the set the crowd are pretty much bouncing all over the place! 'Dirty Davey' and 'Riverflow' start the encore and carry on this trend, it's the cover of Chumbawumba's 'Tubthumping' to end the show that is a pleasant surprise Thomas White is brought back on for guitar and the 'female' vocals, whilst "local lad from Leeds" Dunstan Bruce from Chumbawumba does a fine job of shouting the shouty song and moshing like a nutter. Excellent fun, roll on March!